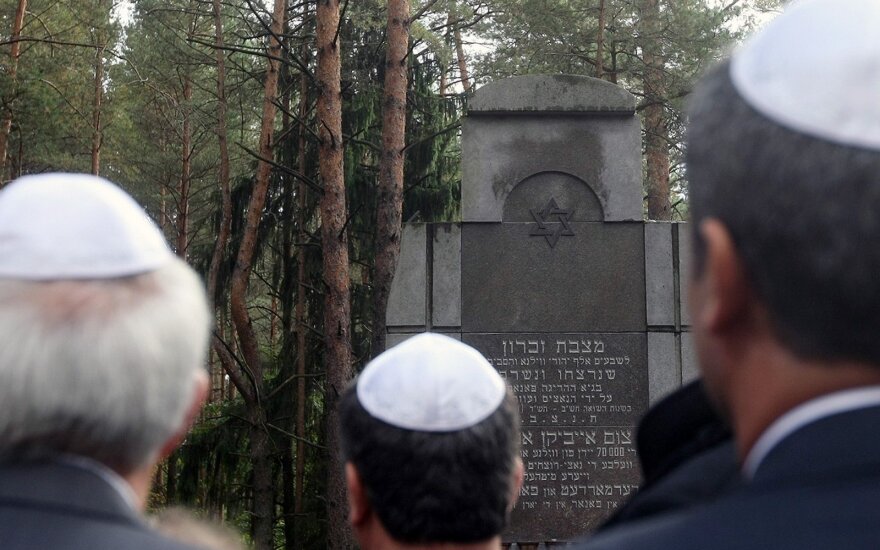 They don't have a voice. Although they do, as my father says, speak to us ceaselessly. From the pits by the forest. Marked and unmarked. Spruced up and covered with garbage. They engage us and our conscience. A handful with a conscience do respond, some with solemn silence, some by silently carrying and lighting a candle in the forests of Šeduva or at some other place of sadness, some by saying something unpopular about the state of our memory which has turned into forgetfulness.

And also respond those for whom the perpetual reminding of the two hundred thousand human beings laid in the pits elicit anger — how much longer can they appeal to our conscience, how many times can we be scolded for our apathy over what happened, how many times can we be reminded that you are still lying there and will lie forever in a place where the trash of our memory swirls? And there are those who express their anger through intelligent cynicism; they remind us about the Jewish police, Jacob Gens, they argue that so many of you died because you didn't flee in time (there are such people, too). These people, who call themselves journalists or doctors of some scientific field or even attorneys, speak cynically about the responsibility of victims for being victims. It's your own fault. Do you hear that, you who lie under layers of refuse and moss? You're the guilty ones.

If you want to prove you are not, make your appeal to the Genocide Centre or the prosecutor. Why don't you speak? Are you tired of trying to engage us in a conversation? Don't you have a voice? You don't. The murdered don't vote. You, the murdered, didn't vote on commemorative plaques for the Noreikas, statues for the Krištaponises, and not for historic reports for the "patriotic" Škirpas. You don't have the right to vote. We have that right. You are lying there, deeply, under layers of our un-conscience, under the moss of our cynical memory and dirt. They are not voting for you. They are voting against you. Rest in peace. Your peace is assured by behaviours and choices of the living who have the right to vote — we obediently decorate your eternal peace with lies. That's how we're voting.

We have that privilege, we are alive. You, the murdered, get a commemoration or two. A small speech. In the best of cases, a conference or a small exhibit. Isn't that enough? It will suffice. Your rescuers will also get a monument. Aren't you happy? Not so fast. Just to keep things balanced, we will be walking to that monument along streets and alleys named after your murderers, we will be sending our children to schools named after them. That's how we, the living, vote. Once upon a time, they took your life. Now we will also take your vote and your voice. You don't take part in our elections and selections. Farewell and Godspeed until the next commemoration.

Businessman Valdas Balčiūnas has been named the 2015 Person of Tolerance in Lithuania, the public...

Lithuanian prosecutors 'should look into list of Holocaust perpetrators'

The leader of the Jewish Community of Lithuania, Faina Kukliansky , says that the Genocide and...

Author explores Holocaust in Lithuania: 'Our own boys used to go shooting people after school' (20)

Author Rūta Vanagaitė recently presented a book, "Our Own", about the Holocaust in Lithuania ....

'They showed that Lithuanians were an honourable people, they saved their own and their nation's honour'

Hundreds of ordinary Lithuanians who saved Jews are honoured in Israel

What a silly title, I thought after I wrote it. There is no such thing in Lithuania. There was a...