BNS
aA
Pope Francis will pay a state visit to Lithuania on Sept. 22-23, the Vatican said on Friday. 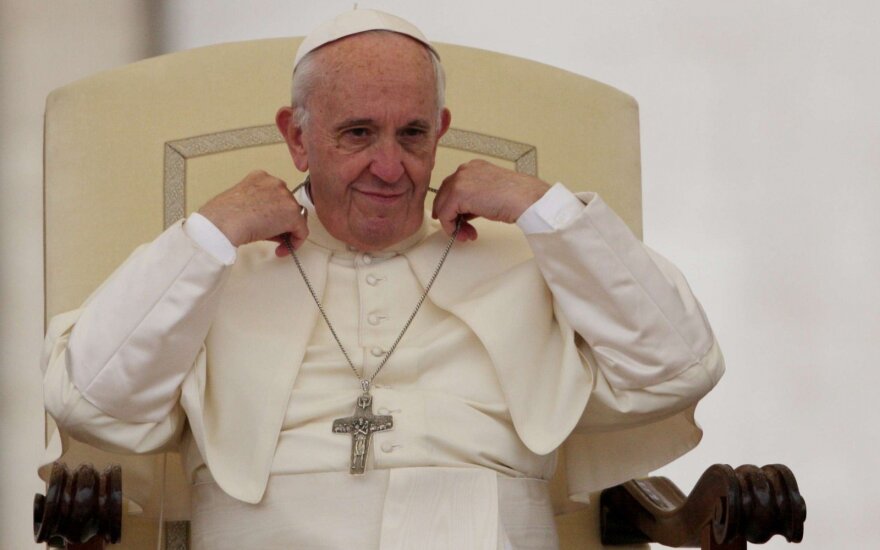 "The pope is, first of all, coming to the faithful, rather than to those in government," Gintaras Grušas, president of the Lithuanian Confederation of Bishops, said at a news conference in Vilnius.

The Holy Father is scheduled to meet with President Dalia Grybauskaitė, the Catholic congregation, young people, the disabled, deportees and political prisoners affected by Soviet repressions and Jewish survivors of the Holocaust, with visits planned to the Gate of Dawn and the Genocide Museum in Vilnius.

The Lithuanian President's Office said the pope would greet the nation, the country's top officials, foreign diplomats and representatives of the academic, art and civil society in the Simono Daukanto Square in front of the Presidential Palace.

Pope Francis is also expected to meet the youth in the Cathedral Square.

On the second day of his visit, the Holy Father will celebrate a public Mass in the country's second-biggest city Kaunas.

According to Grušas, Francis will use his popemobile during his visit to Lithuania so that more people could see him.

Grybauskaitė described the pope's visit as "an event of historic significance".

"Lithuania has always felt the genuine support of the Holy See. The Vatican has never recognized the occupation of Lithuania. It has always supported resistance fights for Lithuanian independence, spreading information about the true state of things," she said in a press release.

Grušas noted that, among other things, the pope's visit would draw the world's attention to the Baltic countries, which are marking their centenary this year.

The motto for Francis' visit to Lithuania is "Christ Jesus –Our Hope".

The pope is also scheduled to visit Riga and Aglona in Latvia on Sept. 24 and Tallinn in Estonia on Sept. 25.

Pope Francis will be the second leader of the Roman Catholic Church to come to Lithuania after Pope John Paul II, who visited the country on Sept. 4-8, 1993.

Lithuania's Finance Ministry has proposed raising the funding of the country's traditional religious...

Pope Francis has been presented with a Lithuanian national flag as a symbolic gift marking the...

A visit by Pope Francis to Lithuania would help the country to reinforce its society and provide it...

What to watch in Lithuania's politics, culture, society in 2018

Here are some of the major events to watch for in Lithuania's politics, culture and society in 2018:

President Dalia Grybauskaitė has sent the world's smallest nativity scene to Pope Francis as a...