Sergey Kanovich
aA
For our freedom and yours, we heard this motto during the independence movement in 1990 inviting everyone--Lithuanians, us Jews, and others--to rally to fight for independence. And we rallied, believing that in that Lithuania--the Lithuania of today--we would all be equal, and not just before God. We thought we'd be equal before memory, and before our history. As brothers and sisters. Are we equal in memory? Are we equal before history? 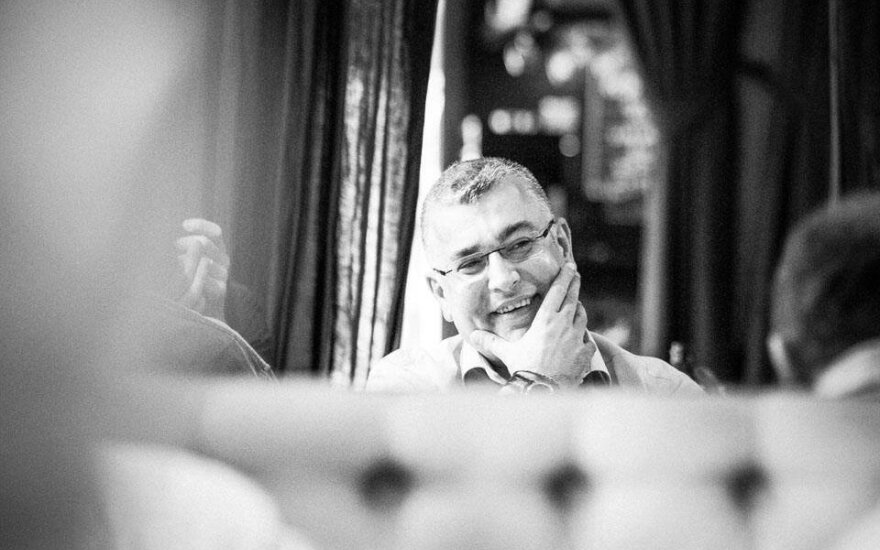 What about today, when discussion has come up whether it is worth honoring with a street name a volunteer soldier who fought for Lithuanian independence, the first to raise the tricolor on the castle tower almost a century ago, a man who commanded a different sort of movement, one which systematically and openly called for freedom only for some, before and after the June Uprising.

His ideology and that of his organization, the Lithuanian Activist Front, was inseparable from that of the battle for independence. For independence without Jews--without me, without my father, my grandparents and of those for whom there are annual bureaucratic gatherings to feel ashamed beside the larger pits, or beside those for whom the television cameras await.

This volunteer who turned from patriot to his polar opposite didn't know after eighty years had passed his enemies would become the people who stood beside me on the Baltic Way [a peaceful protest in August of 1989 when people formed a human chain across the Baltic republics], and the people who invited others to join the event.

If we still believe until now Lithuania is a state where everyone is equal--before God, memory and history--and if we believe we are fighting today in the face of rising threats for the freedom of all of us without exception, we shouldn't have any reservations about letting remain names of streets, university auditoria and schools honoring those who didn't fight for this sort of Lithuania.

Once upon a time, not so long ago, in 1941, the sadly notable typical anti-Semitic call went out from the Lithuanian Activist Front led by Škirpa: to brother and sister Lithuanians. Today I can only call upon you:

"Brother and sister Lithuanians, that decisive final hour of reckoning has arrived when you can act courageously and nobly: to turn that black page of history by saying that there will never be a place in Lithuania for honoring any collaborators."

To say that the final hour of reckoning with the Jews has not come, and that the rights and privileges Vytautas the Great granted us are not rescinded, and that we do not have to immediately quit the land of the Lithuanians, that hour had not come, but the moment has come when we can be addressed thus:

"Brother and sister Lithuanian Jews, we assure you that the criminals responsible for the death of your ancestors, the actual murderers and their ideologues, will never return to our life, neither in the form of streets named for them, nor schools or squares. We apologize for those politicians who tried to justify in all sorts of ways those sinners, we apologize that there is even discussion on whether or not to honor those movements and their leaders responsible for the fact that so few of your and our brother and sister Lithuanian Jews remain.

"Today we cannot even conceive of naming a place in Vilnius or another part of Lithuania after a Sąjūdis [Lithuanian independence movement in Soviet Lithuania] figure if that person had distributed leaflets in Cathedral Square calling for a Lithuania without us, if the fathers of our independence had been like Mr. Škirpa and Lithuanian Activist Front's anti-Semitic platform. For your freedom and ours, without a question mark."

Speech by poet, essayist and translator Sergejus Kanovičius delivered at the Old Town Hall in Vilnius during the discussion "Should We Change the Name of Kazys Škirpa Alley?"

The Vilnius Town Hall is hosting on Tuesday evening a discussion on whether or not to rename a street...

Remove indecent monuments of a painful past (1)

In the summer of 2015 Vilnius municipality removed four Soviet statutes on the Green Bridge linking...

The day Lithuania became a culture of we

Nearly three thousand participants walked this day to pay tribute to the over 2,000 Jewish...

The stones of Molėtai: Shoah lesson in Lithuania (1)

August 29th, 2016, has become truly important day for Lithuanian people, for Israel , and for all of...

The town of Zarasai, nestled in the picturesque north-east of the country amongst sparkling lakes and...

75th anniversary of massacre of Jews in Šeduva, Lithuania

Lithuania's Prime Minister joined dozens of people marking the seventy-fifth anniversary of the...