Why Lithuanian companies are investing in Belgium

Justinas Šuliokas with Ludo Segers - The Lithuania Tribune
aA
While Lithuania might claim to be the geographic centre of Europe, “Belgium is at the heart of European purchasing power,” according to Thomas Castrel, Economic Counsellor for Flanders. He and his Walloon counterpart Jean-Philippe Schklar explained to members and guests of the EBN’s monthly business breakfast what put Belgium in a unique position as an attractive destination for investment, including from Lithuanian businesses. 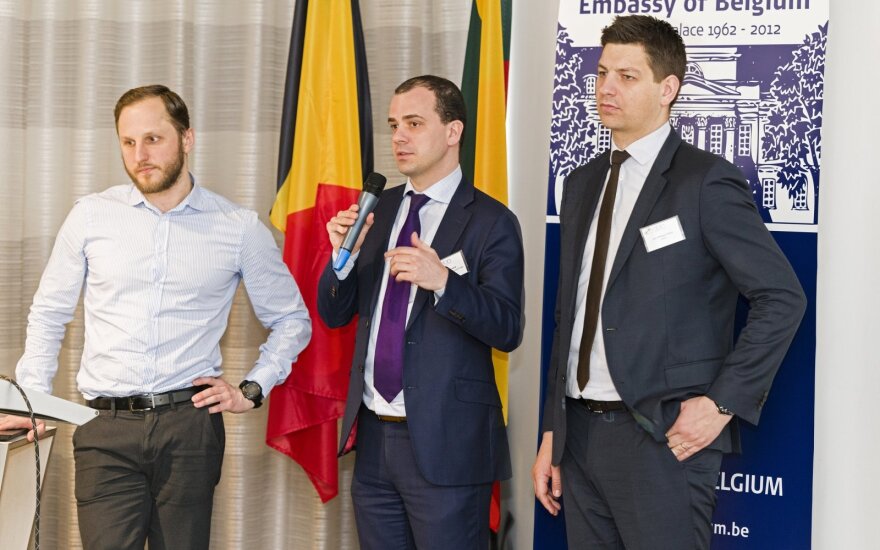 A federal country of some 11 million inhabitants is famously comprised of three regions with vast autonomy in areas ranging from culture and education to economy and trade. Flanders, the more populous Dutch-speaking region, is home to four major seaports with a combined annual turnover of 376.5 million tons of goods. Liege Airport, in French-speaking Wallonia, is the eighth biggest freight airport in Europe.

In addition to being a transport hub of Western Europe, Belgium is a major exporter of chemicals and pharmaceuticals (second only to Germany in the EU), transport equipment and machinery. An exporting nation whose success depends on free trade and open borders, Belgium is, unsurprisingly, a proponent for "soft" Brexit, as "hard" Brexit might shave as much as 2% off its GDP.

A number of Lithuanian companies already maintain a presence in Belgium, Messrs Castrel and Schklar noted, primarily those whose production is geared towards export. Vičiūnai Group ships its foodstuffs from the Port of Zeebrugge, while Achema, the country's biggest fertilizer producer, maintains a base in the Port of Ghent. The Lithuanian logistics company CargoGo maintains headquarters in Antwerp.

But Belgium is more than a logistics hub of Western Europe. With a well-developed network of education and research institutions working in close cooperation with businesses, Belgium is a powerhouse of research and development. These opportunities, too, are readily exploited by Lithuanian companies.

A case in point is Brolis Semiconductors, a recipient of the 2018 Newcomer of the Year award as a new investor in Flanders. Started in Vilnius in 2011 by three Vizbaras brothers, the company develops sensoring solutions used in defence, medicine and industry. The big ambition of Brolis Semiconductors is to develop and bring to the market photonic chips, tiny sensors that could be integrated into phones or wearables with wide application in, for instance, healthcare. These tiny chips could, among other things, be used to monitor sugar levels in diabetes patients' blood in real time and completely non-invasively.

The problem, according to the company's co-founder Kristijonas Vizbaras, was that the needed expertise in silicon photonics was nowhere to be found in Lithuania. "And so if the mountain won't come to Muhammad, Muhammad must go to the mountain" – Brolis opened a facility in Ghent, to make use of the expertise and research of Ghent University.

Among the factors that enabled the Brolis Ghent operations were the generous tax exemptions offered by the Belgian government for research and development activities. This way, Mr Vizbaras says, it was more economical for Brolis to open a facility in Flanders, hire local staff and offer them competitive pay than to establish similar operations in Lithuania.

This presentation was part of the monthly business breakfast being organized by the European Business Network (EBN).

Lithuania has to increase investment in human capital - European Commission

Changes to Sodra taxes in the making

Lithuania made a triple jump into becoming the European FinTech centre

The fact about Lithuania as one the most favourable and friendly jurisdiction for FinTech companies,...

Knitting, welding and metal bashing are probably not high on the list when most discuss the jobs of...