(1)
BNS
aA
Around 400 people have on Thursday afternoon gathered outside the government office in central Vilnius to protest against the accommodation of migrants in the town of Dieveniskes in Salcininkai District, southeastern Lithuania. 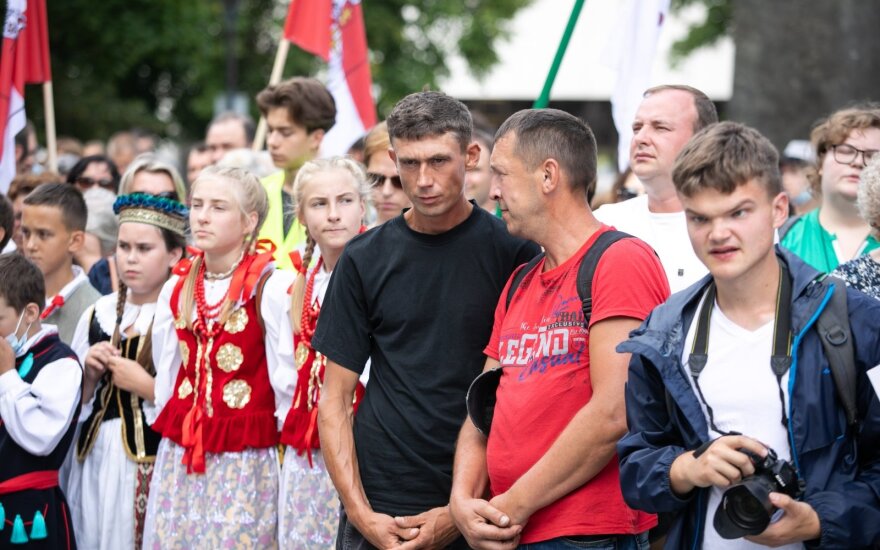 People are holding banners saying "Welcome to the place where police beat own citizens. Beat, Laugh. Do not help, "STOP migrants", "We care about our security". They are also holding Lithuania's state and historic flags, as well as flags of local communities and those bearing symbols of the Family Defense March, a movement in favor of traditional values.

Attending the protest, Jurij Kvetkovski, a resident of Rudninkai, said he came to support residents of Dieveniskes.

"They brought some 300 refugees close to our village. We will live near those bandits who are crossing the border illegally, they are not afraid of anything. We are concerned about our security, the security of our children, the security of our homes. I know what they do in Germany, Sweden, it's impossible, they go around like they at home," he told BNS.

Earlier this week, several dozen people blocked the road to the Rudninkai military training area, protesting against the accommodation of migrants there. Officers had to use force. Interior Minister Agne Bilotaite late said a compromise on the accommodation of migrants within the territory of the training areas had been found with local residents.

The Interior Ministry had planned to house several hundred migrants in Dieveniskes by September but later withdrew those plans after the local community resisted.

Bilotaite confirmed there are now no plans to bring migrants to Dieveniskes and the initially planned premises are kept as a reserve.

Dieveniskes residents have staged a number of protests against plans to accommodate migrants in the town, saying that the planned place was close to a local school.

Several thousand people have gathered outside the Lithuanian Seimas on Tuesday morning to voice their...