2
BNS
aA
Lithuanian President Gitanas Nauseda's refusal to sign a declaration by leaders of some EU countries on the rights of the LGBTQ community has sparked controversy back at home. 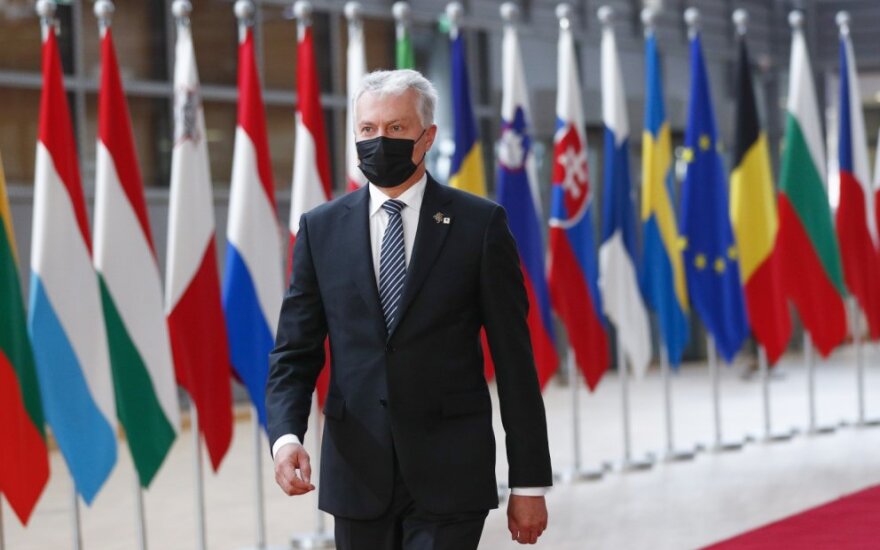 Some politicians say it was the president's personal decision and call on state institutions to improve their coordination to avoid the image of a country without a common position in the eyes of the international community.

Foreign Minister Gabrielius Landsbergis, leader of the ruling conservative Homeland Union – Lithuanian Christian Democrats, says he cannot imagine how positions on the sexual minority issue can be aligned in Lithuania.

Meanwhile, Ramunas Karbauskis, leader of the Lithuanian Farmers and Greens Union, the biggest opposition party in Lithuania, has welcomed Nauseda's move and says it reflects the opinion of the majority of people in Lithuania.

Their comments came in response to the president's refusal to sign a letter, backed by 17 EU leaders, in response to a controversial anti-LGBTQ law recently adopted in Hungary, although earlier this week, Lithuanian Deputy Foreign Minister Arnoldas Pranckevicius signed the joint letter expressing "grave concern" over Hungary's new law.

Landbsergis says politicians' opinion on value-based issues differ, adding that he cannot imagine how such position could be aligned.

"These are important value-based issues, and we see different attitudes on them. I cannot imagine how we could align such positions in Lithuania," Landsbergis told BNS on Thursday.

In his words, letters of this nature are not mandated by state institutions, meaning that politicians who sign them decide on that personally.

Speaker of the Lithuanian Seimas Viktorija Cmilyte-Nielsen, leader of the Liberal Movement, notes that when Lithuania joined the European Union, it committed "to respect certain values, human rights, tolerance, the principle of non-discrimination".

"I believe it's important that such positions by the majority of EU countries are expressed as they see arising threats to these rights and these values in one or another country. First of all, I would like to say I am glad that the Foreign Ministry and the government have clearly expressed their positions as a similar letter was signed on behalf of Lithuania last week," Cimlyte-Nielsen told BNS.

Speaking with, economy and Innovation Minister Ausrine Armonaite, leader of the liberal Freedom party, part of the ruling block, expressed her regret that Lithuania was not among the states that signed the declaration on LGBTQ rights.

LFGU leader: it's the opinion of Lithuania's people

LFGU leader Karbauskis says he fully backs Nauseda's decision, saying that the president represented the majority of the nation and adding that it's impossible to represent all opinion when positions differ.

"The president represents the nation, and it's impossible in this case to represent all opinions when we have different opinions. He represents that opinion that, polls show, is backed by 75 percent of the population," the LFGU leader said.

MEP Vilija Blinkeviciute, leader of the Social Democratic Party of Lithuania, says institutions should better coordinate their positions as "it doesn’t look good when there's no joint position".

On Tuesday, before the European Council's meeting, 17 EU leaders signed a letter, which does not directly mention Hungary, deploring "threats against fundamental rights and in particular the principle of non-discrimination on grounds of sexual orientation".

Nauseda refused to sign the letter, saying that "problems aren't solved by letters".

Earlier this week, the letter was signed by Deputy Foreign Minister Arnoldas Pranckevicius. Landsbergis later said Pranckevicius did so at his own initiative.

The new Hungarian law became a subject of disputes at the European Council on Thursday where Hungarian Prime Minister Viktor Orban came under fire from a Western European leader.

Nauseda has backed Hungary after the meeting and said that some EU leader commented on the Hungarian law without having even familiarized themselves with the text, therefore, they should not take on the role of judges.

Global Lithuania Award winners refuse to accept them from president (1)

The opposition Lithuanian Farmers and Greens Union's political group in the Lithuanian Seimas is now...