...
BNS EN
aA
The Vilnius court hearing a trial of the January 13 attempted coup has decided to question former president of the Soviet Union, Mikhail Gorbachev. 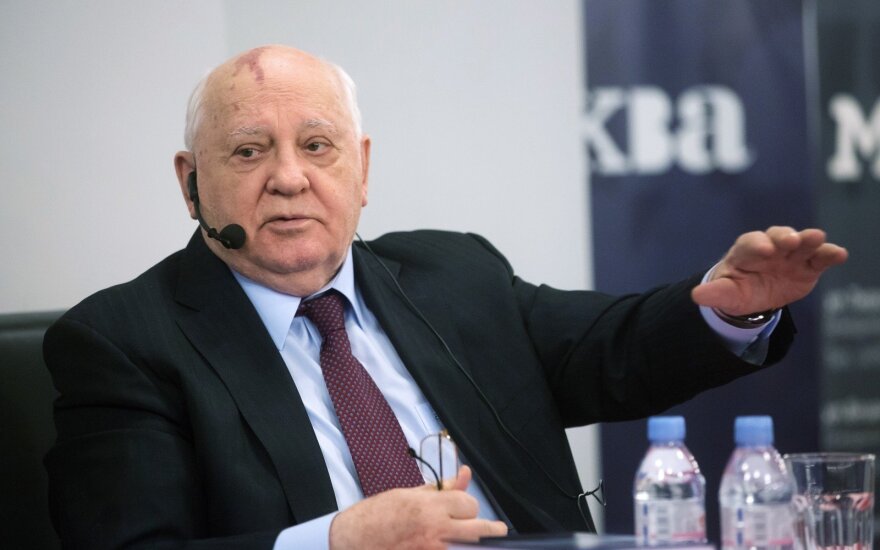 The information was confirmed to BNS by Robertas Povilaitis, victim in the case who has lost his father Apolinaras Povilaitis in the 1991 developments and who is present in court hearings.

The information was confirmed to BNS by Robertas Povilaitis, who is listed as a victim in the case because his father Apolinaras Povilaitis died in the bloody events of Jan. 13, 1991 in Vilnius.

Judge Ainora Kornelija Macevičienė of the Vilnius Regional Court says that anyone who has important information for the case can be summoned as a witness.

"(The decision was made) taking into account the material of the criminal case and the fact that a number of witnesses, including Soviet Army soldiers (...), named Mikhail Gorbachev as a person possibly having knowledge of the circumstances of the case that is being heard by the court. His name was mentioned and, therefore, the court granted the request of the victim's lawyer," she told reporters.

The judge said that a request for legal assistance in summoning Gorbachev to testify would be sent to Russia's authorities.

Povilaitis has earlier attempted to persuade the Lithuanian law-enforcement into opening a separate probe of Gorbachev's role and list him as special witness. In their refusal to start a separate investigation, Lithuanian prosecutors said that the available evidence did not lead to a conclusion that Gorbachev was aware of the intended military action and failed to take measures to prevent it.

Prosecutors also stated that efforts had been made since 1992 to get answers from Gorbachev about the developments of January 1991, however, the attempts were vain. Prosecutor Daiva Skorupskaitė noted that listing Gorbachev as special witness was not possible, as he refuses to cooperate with Lithuanian prosecutors and there are no other ways of putting a citizen of a foreign country to appear in Lithuania to testify.

Povilaitis, in his turn, maintained that the Soviet president could have known, but consciously ignored the information about his subordinates' plans to engage in war crimes and committing them, furthermore, did not do anything to prevent them.

Fourteen civilians were killed when Soviet troops stormed the TV Tower and the Radio and Television Committee building in Vilnius on Jan. 13, 1991.

Some 65 defendants stand charges of war crimes and crimes against humanity, many of them in absentia, as they are hiding in Russia or Belarus. Merely two are present in hearings. The trial is one of the biggest trials in the history of Lithuania in terms of the size and the number of suspects.

Six persons were sentenced in the January 13 case back in 1999 for founding anti-government organizations and other crimes.

January 13 coup defendants living in Russia are willing to take part in the judicial proceedings...

Mikhail Gorbachev, the last leader of the Soviet Union , will not be part of the court proceedings...

Gorbachev's spokesman gives no comment on court's move to question

Spokesman for the Soviet Union 's former president Mikhail Gorbachev has refused to comment on the...

Gorbachev had to have known about the January 13 Vilnius assault

I read with interest the BNS October 17, 2016 article , published in the EN.DELFI by the Lithuania...

Ambassadors of the three Baltic states have asked the German media to stop referring to Lithuania,...

Court gets no response from Gorbachev in 1991 crackdown trial

The Vilnius Regional Court has so far received no response from Soviet leader Mikhail Gorbachev whom...