BNS
aA
We must show that there's no free access to the territory of the European Union, European Commissioner for Home Affairs Ylva Johansson says, having arrived in Vilnius to assess the ongoing migration crisis. 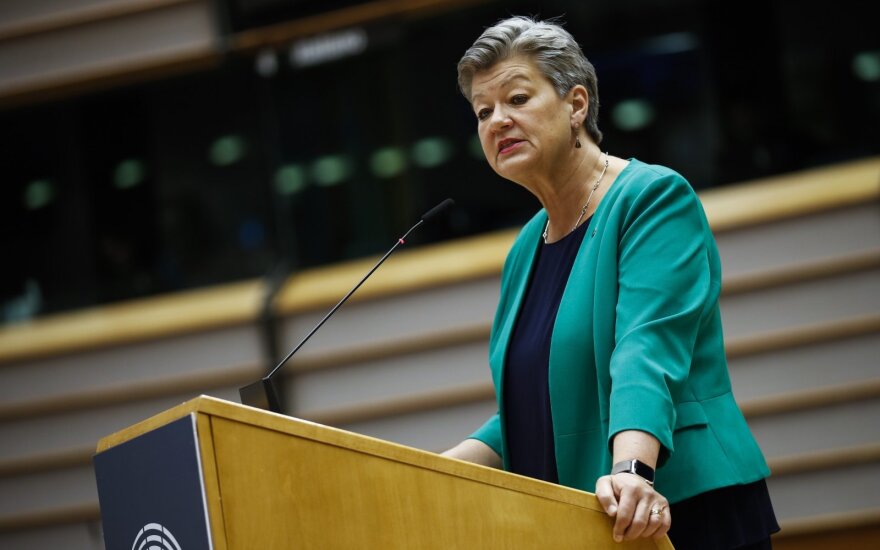 "This is a provocation of the Lukashenko regime. (…) And we have to make it clear that as there's no free access to the EU territory. Lithuania, the EU and Schengen countries are obliged to prevent non-authorized access to the Schengen area. And that's why it's so important that we, as a whole of the EU, now stand together with Lithuania to protect our common external border with Belarus," Johansson told a press conference in Vilnius on Monday.

Speaking after her meeting with Prime Minister Ingrida Simonyte, Johansson said Lithuania's dealing not only with a migrant crisis, stating that it's an act of the authoritarian Belarusian regime, aimed at provoking.

"What we are facing is an aggressive act from the Lukashenko regime. It’s one that is designed to provoke. (…) And it's not primarily a migration crisis. This is an act of aggression that is aimed to provoke," the European Commissioner said.

She also underlined that the European Commission stands ready to provide additional funding for border protection.

"We are ready to fund extra measures from the European Commission and I will send a delegation (…) and they will spend a few days here to discuss in more detail, what we have discussed briefly, possibilities to fund a good protection system for the external borders, with surveillance, with protection to help to prevent irregular arrivals," Johansson, adding that the aforementioned delegation could arrive as early as Sunday.

Prime Minister Simonyte said she didn’t want to "speculate on figures" on how much the maintenance of migrants could cost for Lithuania, adding that the Lithuanian government is ready to build a wall alongside the border with Belarus, irrespective of how much the European Union would contribute to that.

"There's another part of solution related to physical border protection and also equipment that need to be installed on the border, and also physical barriers the government stands ready to build on the border, starting with vulnerable sections. And we are speaking about major sums in here if that project is implemented. We are speaking about sums exceeding hundreds of millions of euros. But the government will implement this project, irrespective of how we will manage to have discussions with the European Commission on the possible involvement of EU institutions as this is how we understand the protection of our border and the border of the EU," the Lithuanian prime minister said.

The visit's schedule also includes meetings with representatives of the State Border Guard Service, as well as Frontex and EASO officers working in Lithuania.

Lithuania has so far detained over 3,000 illegal migrants this year after they cross into the country from Belarus, which is more than 40 more than over the whole year of 2020.

Border guards say most of the migrants want to get to Western European countries via Lithuania.

A state-level extreme situation is declared in Lithuania over the unprecedented influx of irregular migrants which Lithuanian officials say is being orchestrated by the Belarusian regime.

Bilotaite: sending migrants to their countries of origin ASAP is key task (2)

The key task now is to send migrants crossing into Lithuania from Belarus to their countries of origin...

Minister: troops to continue to help protect border with Belarus (1)

Lithuanian troops will continue to assist border guards in protecting the border with Belarus amid the...