...
Sponsored content, Jelena Rakocevic
aA
"We love the Patriarch and the Patriarchate, we respect it. But we should emphasize that we love the Church and our country more than all". This very recent holy statement of Archbishop of Athens and All Greece Ieronymos, after the cancellation of the two leaders' meeting in the Greek capital, reflects the new "cold war" between the two main ecclesiastical poles of the Hellenic Orthodoxy - the autocephalous Church of Greece and the ecumenical Fanar. 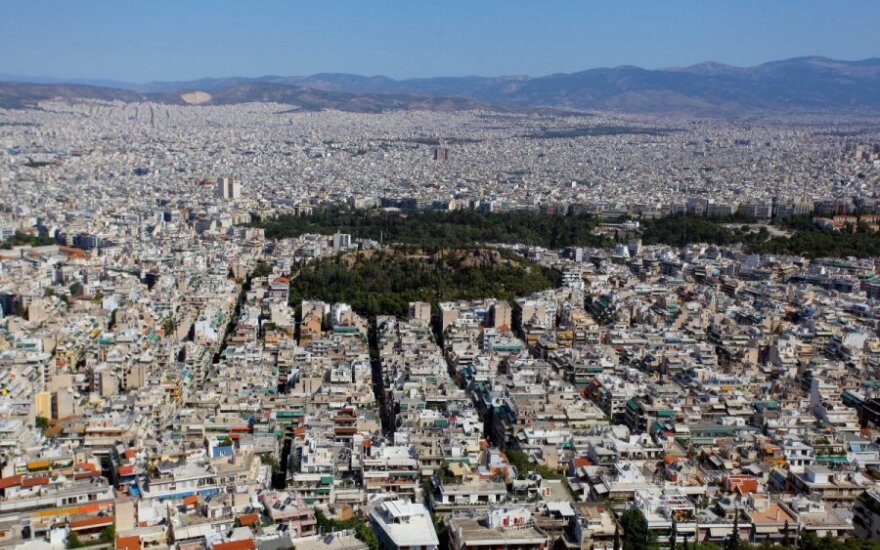 The confrontation between the Church of Greece and the Ecumenical Patriarchate is not a present-day phenomenon. Nearly 15 years ago, the situation resembled the one of today. Back then, Archbishop Christodoulos and Patriarch Bartholomew crossed their swords. The conflict ended with the Ecumenical Patriarchate imposing the punishment of excommunication, the interruption of any communication between the two sides. At the same time, he declared illegal the elections of metropolitans of the "New Lands" by the Church of Greece.

Today, the relations between the two sides are witnessing a new serious crisis, although a year ago, in the summer of 2017 everything was not so bad. In June 2017 Bartholomew and Ieronymos met at the Archbishopric of Athens and the atmosphere seemed “warm” enough.

The basic and endless part of the confrontation between the two sides is the so-called "New Lands". A few years ago, the personal controversy between Bartholomew and Ieronymos for these territories emerged during the election of the Metropolitan of Ioannina when Maximos, the Archbishop's right hand was elected instead of Amphilochios, who was Bartholomew's choice. Later, however, he was ordained Metropolitan of Andrianoupolis and bore the title of "overseer" in Athens.

During the Pan-Orthodox Council on Crete in 2016, a very important statement was made regarding the status of the "New Lands". It was then that Ecumenical Patriarch Bartholomew stressed in the most categorical way that the Metropolises of the "New Lands", namely Epirus, Central, Eastern and Western Macedonia, Thrace and the North Aegean, are subordinated to the Patriarchate's intellectual jurisdiction, but they were assigned to the Church of Greece by the Patriarchal and Synodical Act of 1928 for reasons related to their effective confession, and the Patriarchate, either now or in the future, doesn't intend to seek reversion of the Act. That is, the Cathedrals of these lands will remain forever in the administrative jurisdiction of Greece. And then the hierarchy of the Church of Greece celebrated...

However, the issue with the "New Lands" couldn't be solved so easily.

The future of the 36 Cathedrals of "New Lands" can be shaped following the Ukrainian issue.

The Ukrainian ecclesiastical question is one of the points of the Athens-Fanar confrontation. A few months ago, with the climate between the two parties was already bad, a delegation from the Fanar came to Athens to demand the support of the Church of Greece in the decision of the Ecumenical Patriarchate to grant autocephaly to the schismatics of the Kyivan Patriarchate.

At the recent meeting of the Greek Church Hierarchy in early October, the issue was not discussed despite the fact that some Metropolitans such as Seraphim of Kythira and Hierotheos of Nafpaktos called for it. On the contrary, the Church of Greece appears not to welcome the Russian call for talks on Ukraine and a Pan-Orthodox Synod on this issue.

The Church of Greece stays neutral over the Ukrainian issue because the Greek hierarchs fear that the "Macedonian" schismatic Church as well as the "New Lands" will take their turn.

Besides, four years ago, during his visit to Thrace, Bartholomew warned the Greek Church: "We cannot afford to question the everlasting inalienable rights of the Ecumenical Throne on the present Metropolises, which constitute its hinterland". And so that there was no misunderstanding of what he meant, he added, "We will never deny the rights of the Mother of the Church to these Holy Metropolises". This statement is identical to what he says today about Ukraine. How can the Greek side not be worried despite the assurances of the Synod of Crete with a man who says something one day and changes his mind following his interests?

Particularly important is the fact that on September 1 the Fanar called the hierarchs of the "New Lands" for the meeting of the Hierarchy of the Ecumenical Throne, obliging them to agree that it has the right to take decisions on the Ukrainian autocephaly.

On top of that, the Athens-Fanar conflict also involves Russia. Members of the Fanar believe that Greek Metropolitans maintain good relations with the Russian Patriarchate and that there are secret funds channeled from Moscow to Greek Metropolises.

Besides, Greek holy relics, icons etc. are often transported from Greek Cathedrals to be presented in Russian cities.

Although there was a permanent open front for the "New Lands", the worse came and culminated in the case of St. George church. And the message of distress was sent when the Archbishop did not go to celebration for the new Saint of the Orthodox Church Elder Iacovos Tsalikis in Evia last June and did not join the Ecumenical Patriarch.

The holy temple of Saint George was built upon the request of the Naxian physician Demetrios Probonas in the Probonas estate in Athens. On Thursday, October 26, 2017, the Holy Archdiocese of Athens and Archbishop Ieronymos filed a lawsuit against Ecumenical Patriarch Bartholomew and the Probonas Legacy Committee. The lawsuit was filed because the Ecumenical Patriarchate with a notarial deed of donation took possession of the holy temple in the estate located within the boundaries of the Municipality of Athens and New Philadelphia.

According to the lawsuit, Archbishop Ieronymos claims that with the donation made by the Probonas Committee to the Ecumenical Patriarchate "an attempt was made to detach the holy church of St. George from the legitimate and spiritual jurisdiction of the Αrchdiocese of Athens and the Archbishop and to turn it to another ecclesiastical legal entity in violation of the will of Demetrios H. Probonas".

However, last April, under the command of Archbishop Ieronymos, all the details and actions concerning the Church of Saint George were communicated by the Archdiocese of Athens to the Ecumenical Patriarch Bartholomew himself. On Wednesday March 7, 2018, at the meeting of the Permanent Holy Synod of the Church of Greece, Ieronymos informed the hierarchs about the Probonas case. The Archbishop referred to the decision of the Athens Court of Justice, which was reviewing the Church's order to seal the holy temple due to its operation without permission.

But a few weeks ago, the Council of State of Greece (following a request for cancellation by the Ecumenical Patriarchate) decided that "the sealing of the holy Church of St. George on the grounds that the public worship of the Temple by the Abbot of the Vlatadas Monastery took place without the permission of the Archdiocese, is not justified".

This was the drop that overflowed the glass of contradiction and the obvious reason for canceling the scheduled Bartholomew-Ieronymos meeting a few days after the decision.

Still, there are even more issues that ignite the conflict between Athens and the Fanar.

Recently, Kostas Dimtsas, a close associate of the Archbishop, was appointed a political commander to Mount Athos. Dimtsas is the head of APOSTOLI, a non-governmental organization of the Greek Church.

The civilian administration of Mount Athos belongs to the Greek Ministry of Foreign Affairs. From a spiritual point of view, however, Mount Athos is under the direct jurisdiction of the Ecumenical Patriarchate, so the Fanar did not approve of the appointment of Ieronymos' associate in Karyes.

As if not all these were enough, yet another piece in the pie of the Athens-Fanar conflict is that the hierarchs of the Greek Church have acted indirectly or directly against the Patriarch. For example, a year and a half ago Metropolitan Amvrosios of Kalavryta and Aigialeia said that the Patriarch is deceived and that the Orthodox have an Ecumenical Patriarch not a Pope!

The reactions came to a point where the Ecumenical Patriarch Bartholomew asked in an official letter dated November 18, 2016, Archbishop Ieronymos to take action, and warned that the Ecumenical Patriarchate would cut ties with Metropolitans Seraphim of Piraeus and Amvrosios of Kalavryta if they do not opt out and stop their war against the Synod of Crete.

To be noted is that after what happened in June 2016 in Crete, individual priests and monks interrupted the commemoration of Bartholomew, calling Ecumenism a heresy and considering the Patriarch as its direct representative.

Finally, as far as the political dimension of the matter is concerned, Bartholomew maintains good relations with the Greek Prime Minister Alexis Tsipras, a self-described atheist, and with ex Foreign Minister Nikos Kotzias as well since both sides (the Fanar and Greek government) rely on US aid... Officially, however, the government is not involved in the Athens-Fanar conflict.

We can only hope that the Church of Greece and the Ecumenical Patriarchate will find a peaceful solution. The conflict should be taken seriously especially against the background of the current events in Ukraine. Russia has already cut ties with the Fanar, so can Athens if Constantinople attempts to foster the autocephalous motions in Macedonia. That step will obviously divide the Orthodox world even more.

NOTE: The opinions expressed in this article are solely the author's and do not represent those of EN.DELFI by the Lithuania Tribune or its staff.

The History of the Polish Orthodox Church to Repeat in Ukraine?

The autocephaly of the Ukrainian Orthodox Church seems to be closer and closer, and for some this will...

On April 20, Deputy Head of the Presidential Administration of Ukraine Rostyslav Pavlenko met with...

A brief glance on the religious conflict in Ukraine – the Patriarchate of Constantinople seems to be...