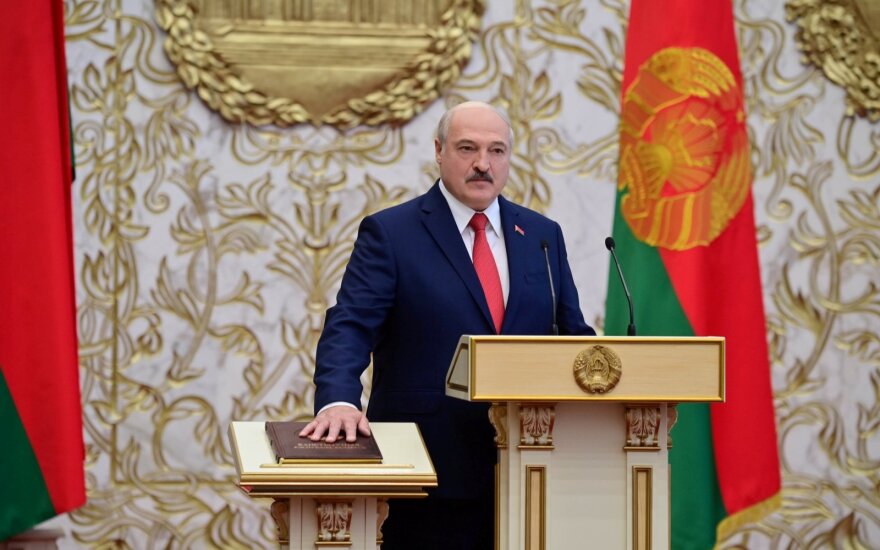 Anastasia Markevich, a Belarusian studying in Lithuania, described the inauguration as absurd, saying she does not consider Lukashenko a legitimate leader.

"I think it's absurd. We don't consider Lukashenko a legitimate president. I don't think today's inauguration was legitimate," the 20-year-old told BNS as she held a poster supporting Svetlana Tikhanovskaya, the leading opposition candidate in the August 9 presidential election.

Next to the embassy's wall, protesters set up several stands with photographs of a police crackdown on peaceful protesters in Belarus and lit up candles.

Some passing cars honked in support.

"Lukashenko is a dictator, and the inauguration is a farce; it was organized secretly," Aleksey Tyoply, a 35-year-old worker of a Lithuanian company, told BNS.

"All those in power must be replaced, not only the president," he added.

Yulia Rasatneva, who also works in Lithuania, said she believes that Belarusians will achieve a free and democratic election.

"There's a good Lithuanian word, nesamone (nonsense)," the 40-year-old told BNS. "I can't even describe in words what I'm thinking about this situation, but I believe that Belarusians will stand up for their freedom."

Lukashenko has faced unprecedented protests after claiming a landslide victory in the August 9 presidential election which the opposition and Western countries say was rigged.

The authoritarian leader, who has ruled Belarus since 1994, was inaugurated for a sixth term as president on Wednesday. The inauguration ceremony, whose date had not been announced, took place in the Palace of Independence in Minsk.

Nauseda calls Lukashenko's threats "a provocation" and warns about response