Ludo Segers | the Lithuania Tribune
aA
The International Christmas Charity Bazaar opened Saturday morning in the Vilnius City Hall, Rotušė. There was the usual excitement and plenty of smiles on the faces of young and old. This was the 15th edition of the charity event organised by Lithuania's International Women's Association with all proceeds going to support very worthy causes, 10 in all, carefully selected by the Committee. 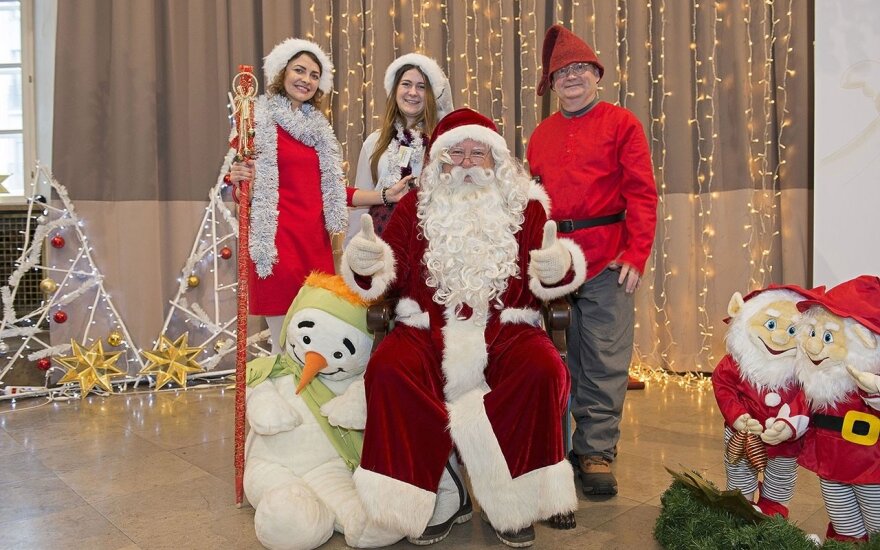 Shortly before noon time, the traditional cutting of the ribbon opened the Bazaar in the presence of this year's International Women's Association of Vilnius Chair, Ebba Michelsson, the wife of Finnish Ambassador to Lithuania, Mrs. Adamkienė, the ICCB Honourable Ambassador, and Mrs Silvija Skvernelė wife of the Prime Minister and this year's , Bazaar's Patron. Vilnius Mayor Remigijus Šimašius also participated in the time-honoured ribbon cutting.

Chair, Ebba Michelsson welcomed all present. During her speech, she expressed her thanks, particularly for the many volunteers, the participating embassies and international schools. They all worked very hard, to ensure the success of the charity bazaar. Mrs Michelsson also said that over the last 15 years the Bazaar had collected more than 1,5 million, benefiting more than 100 charities all across Lithuania.

The Ąžuoliukas choir performed Christmas carols during the opening ceremony. The real Finnish Santa Claus has again come down from Korvatunturi in Finland, close to the North Pole, to meet children of all age and posing for photographs!

With a large selection of food, drinks and gift ideas on display inside and outside, it brought together more than 30 diplomatic representations and five of the Vilnius based international schools. A fine selection of domestic and exotic original gift ideas, crafts and jewellery ensured that there was something to fit every taste and budget.

For those that wanted to add a little excitement to their life there was a lottery with many unique items. All those that attended could feel good in supporting a number of good causes. In addition to the choir performance, there well all day dances and plenty of activity inside and outside the City Hall. After sunset, a Christmas tree was lit in front of the City Hall in the presence of Santa Claus. Although there is no snow yet on the ground, everyone appeared in a seasonal festive mood.

The Charity Bazaar is expected to collect a record amount for the benefit a number of organisations and to help a number of non-for-profit organisations. Last year's Bazaar raised well over 100,000 Euro and the organisers are optimistic to beat that amount this year in the quest to give as much as possible to the 10 selected charities all across Lithuania.

The yearly International Christmas Charity Bazaar (ICCB), a one-day event only will be held...

Earlier this week a light snow dusting provided a little extra touch that we all associate with...