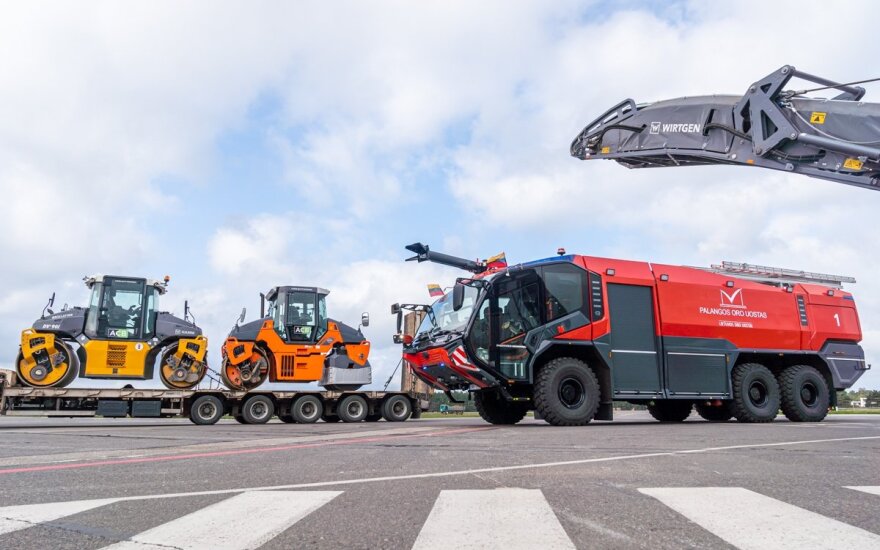 “After having systemically evaluated priorities of all Lithuanian airports, we have managed to start the implementation of this project and to organize its financing. We are extremely grateful to the Prime Minister Ingrida Šimonytė and my colleague Gintarė Skaistė, with the help of whom we are able to talk about such a short closure of Palanga airport for its reconstruction“, says Minister for Transport, M. Skuodis.

According to the Chief Executive Officer of Lithuanian airports, Marius Gelžinis, preparation works for the reconstruction of Palanga airport were started already in April this year.

“We are extremely happy that Ministry for Transport provided funding to this extremely important project of reconstructions. This is a project of big volume and modernization of specific infrastructure and successful implementation of this project mainly depends on preparation, which should be professionally managed. We have assigned the management of this project to our specialist team, who has experience of implementation of analogous contract works“, states Marius Gelžinis.

According to him, regarding strategical planning of activities, modernization of infrastructure in Palanga airport will assure compliance of Palanga airport to all international aviation safety and security requirements and will also ensure our capability to successfully develop flights in Palanga airport in such competitive region of aviation.

According to Palanga city mayor Šarūnas Vaitkus, Palanga airport is very important not only to Palanga city. Since the infrastructure of this airport will be modernized, it will help to create an additional value not only to the Western Lithuanian region but to the whole country, as well.

“Palanga airport starts to attract foreign tourists to this region. In addition to this, the airport facilitates regional companies to reach their clients rapidly and comfortably in the whole of Europe. Many inhabitants of the Western Lithuania region use services of Palanga airport to comfortably reach various countries. After having modernized this airport infrastructure, trips will definitely become even more comfortable and safer, and there will be more possibilities to attract new destinations to Palanga“, claims Š. Vaitkus.

The Executive Director of Latvian company “A.C.B.“, which will conduct the main contract works of the airport, Armands Svikis says that all preparation works for reconstruction are already accomplished, therefore the company has prepared to launch the reconstruction.

The operation of Palanga airport will be interrupted for the shortest possible time, which is 45 days, starting from September 6 to October 20. During this the most active time of contract works, the company will work continuously, 24 hours a day, 7 days a week, therefore, the airport will be closed, and no flights will be organized.

In the whole territory of the airport, including subcontractors’ resources, 340 specialists will work, and 120 construction techniques will be used. The contractor will modernize almost 2.3 km long and 45 m width runway, including newly constructed lateral edges, which improve the safety of the aircraft's runway.

During this project, around 170 thousand square meters of the old surface will be dismantled. Almost all construction materials or 90 percent, which will occur during the reconstruction works will be recycled and reused. Non-recyclable materials will be transferred to authorized company, who operate in the relevant field.

During reconstruction works, mainly Lithuanian materials will be used, such as asphalt mixture, minerals, some wells. Pipes, cables, illumination system of LED light signals, water treatment systems and other components will be procured from other EU countries. For the modernization of the infrastructure in total around 83 thousand tonnes of asphalt mixtures, 190 thousand tonnes of minerals, 800 tonnes of concrete will be used.

Modernization of Palanga airport according to the newest international standards will ensure safe operation of the airport and faster servicing of aircraft. Renovated runway and taxiway will assure not only a safe movement of aircraft but also save their fuel consumption. After the reconstruction, the airport will become more environmentally friendly, because one part of reconstruction works will be related to precisely environmental requirements. Engineering solutions will improve the collection of surface wastewaters and water treatments, the implemented LED lights will reduce quantities of consumed electricity of the whole airport.

Even though important construction works are planned, which due to strict deadlines will take place 24 hours per day, inhabitants should feel only a minimal impact of reconstruction. The contractor will strive to limit noise during nighttime. The modernization of Palanga airport is planned in such a way that it should not have a negative impact on the environment. A monitoring plan for environmental effects, specifically prepared for this project, includes necessary measures to reduce noise and dust: banks of earth, regular watering of bulk materials and other solutions.

Palanga airport will be modernized according to international standards

On the 6th of September, Palanga airport will be closed for modernization, which will last for 45...

The 4.67 million euros in net losses due to the coronavirus crisis in the first half of this year by...