EN.DELFI
aA
The annual charity ball, continuing a worthy tradition, took place on November 17 in London organised by the Lithuanian community in the United Kingdom, the members of which, together with British representatives from business, politics, the arts and culture, demonstrated their solidarity with those who need help in Lithuania. 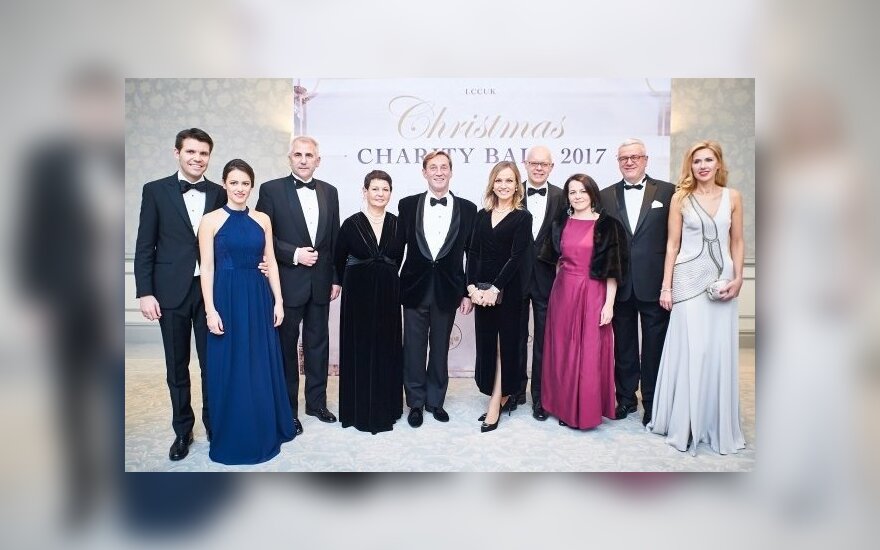 The Lithuanian Chamber of Commerce in the United Kingdom (LCCUK), the initiators of this event, once again, as they do every autumn, invited their fellow Lithuanians and others willing and able to contribute to charitable foundations active in Lithuania.

'We are proud that our annual charity ball has become a tradition. This is a wonderful opportunity for everyone to meet and help children in Lithuania,' said Egonas Jakimavičius, the LCCUK president.

This year, the money collected at the charity ball was donated to the Children's Hospital of the Vilnius University Santara Clinic, at which Lithuanian children suffering from a variety of serious illnesses are treated, and at which the most complex operations are carried out, amongst them – organ transplantation.

The intensive work of the medical staff does not stop for even a second and thanks to them the fates of thousands are changed, hope is returned, and dreams come true. More than 25,000 children are treated at the hospital over the course of a year.

This year it was this hospital that became the focus of the LCCUK charity ball. In the ballroom of the Savoy Hotel in London the guests who had come together showed that they support those who are most in need of help not just by their words but also by their actions.

According to Olga Zimanaitė, the director of the Charity Fund of the Children's Hospital, it has already been decided that the money collected at the charity ball this year will be allocated to the Bone Marrow Transplantation section of the Children's Oncohaematology Department in order to acquire furniture with a special antibacterial surface. This is vitally important equipment. According to the medical personnel it is of particular importance for children who have undergone bone marrow transplantation that there are as few bacteria in their environment as possible because that is when their organisms are not resistant to infection regardless of the source.

This event, under the patronage of H.E. Renatas Norkus, Lithuania's ambassador to the United Kingdom, was not short of well-known faces, among them: Peter Estlin, the Mayor of the City of London, and Vygaudas Ušackas, the European Union's Ambassador to Russia and a former Lithuanian ambassador to the UK. The charity ball was hosted by the well-known Lithuanian journalist Andrius Tapinas, with the music provided by the Lithuanian tenor Merūnas Vitulskis and the jazz group The Canaries.

The Lithuanian celebrities who contributed their services gratis impressed their audience by their dedication, sincerity and professionalism.

'I am delighted that the ideas of charity and support are making inroads into our minds and hearts so successfully. I am delighted that the joy of giving, the wish to help the needy and the weak is becoming a goal uniting our society,' said the evening's guest of honour President Valdas Adamkus, addressing the guests.

As before, it was the auction at the charity ball that drew the most attention and at which the participants bid for various works of art, as well as the prizes donated by the sponsors.

A record sum of €31,100 was reached at the auction. Those who participated at the event also contributed in other ways as well towards the institution which cares for the health of children. The total collected was almost €40,000.

The evening's organisers are grateful to the event's general supporters: Lithuanian Beer, Gintreda and the organising partner OXO Communications, to the evening's host – the journalist Andrius Tapinas, and the tenor Merūnas Vitulskis.

Our heartfelt thanks go to all the guests for their generosity, and in particular to: John Caudwell and Modesta Salemi, Jonas and Živilė Garbaravičius, Rasa Apostol, Peter Estlin, Azad Ayub, Sanjay Panesar, Evaldas Bernotavičius, and Asta Paulauskaitė.

The Lithuanian Chamber of Commerce in the United Kingdom ( LCCUK ) is continuing its tradition of...

Christmas Tree to be lit in Cathedral Square in Vilnius

A Christmas Tree will be lit in the Cathedral Square in Vilnius on Friday, kicking off a series of...

The second Vilnius Christmas tree is to be lit this Saturday.

Jubilee of the Blossom of Hope charity event gathers celebrities, who care for women’s health

The International Women’s Association of Vilnius (IWAV) has organised the charity event Blossom...