What do Vilnius and Abu Dhabi have in common? Rain and competition 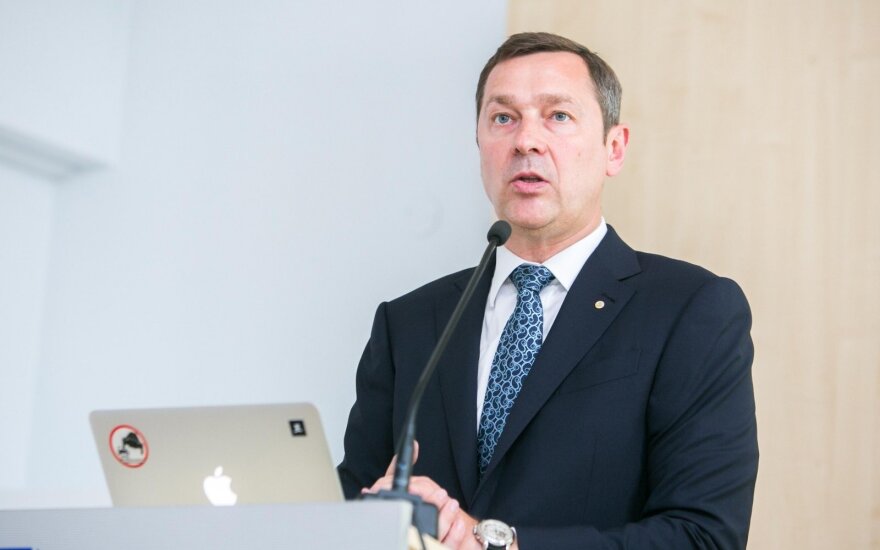 As I walked around the new Louvre Abu Dhabi museum, I was asked many times how I came to be at the official opening.

My first answer was...rain. Lithuania is widely known as a rainy country. And rainfall, only this time in the form of light, is the major architectural focus of Pritzker-winning architect's Jean Nouvel's idea for the new Louvre Abu Dhabi. The museum's buildings are covered in a 180-meter wide parasol that turns sunlight into a rain of light. It's quite extraordinary. A rainfall of sunshine.

So, as you can see, Vilnius and Abu Dhabi have something they can trade – showers of water and sun. It wouldn't hurt Lithuania to get more sunshine and Abu Dhabi could certainly use more rain. Since we now know that rain doesn't necessarily have to be wet, perhaps a creative Lithuanian architect will be able to transform rainfall into light.

But, seriously, what brought me to Abu Dhabi was competition. There was a time when Vilnius and Abu Dhabi were competitors. Both cities sought to be leaders in their regions and in about 2006, they both drew up ambitious plans. I was the mayor of Vilnius at the time.

Vilnius planned to build a world class museum on the Neris River, a new 1,500 seat classical music hall at the top of Tauras Hill were a derelict building still stands and to reconstruct the Sports Hall into a conference and convention center. The buildings were to be designed by the world's most famous architects and acoustics specialists and the museum's partners were to be world-renowned museums.

We were successful in signing agreements with the Guggenheim in New York and the Hermitage in St. Petersburg. The capital of Lithuania was to build the Hermitage Guggenheim Vilnius Museum. World famous architects Daniel Libeskind from the US, Zaha Hadid from London and Massimiliano Fuksas from Italy participated in the architectural competition. An international panel of experts chose Zaha Hadid's project as the winner.

At about the same time, Abu Dhabi confirmed its urban development plan for the Saadiyat Island Cultural District that called for four main buildings: the Guggenheim Abu Dhabi by architect Frank Gehry who transformed the city of Bilbao in Spain, Jean Nouvel's Louvre Abu Dhabi, Zaha Hadid's Concert and Arts Center and a UAE History Center.

Abu Dhabi had wanted the Hermitage to partner with one of its museums, however Vilnius came out the winner in that particular competition. In 2007, we agreed with the Hermitage that they would be the lead partner together with the Guggenheim in the Vilnius project. East and West would meet in the capital of Lithuania. The Vilnius museum was to contain a special hall dedicated to the Hermitage's XX-XXI collection, the only place in the world where such an exhibition would be on view.

The choice of Vilnius as a location had a lot to do with the personal qualities of the leaders of the museums.

The most important voice in the process was that of Mikhail Piotrovsky, the director of the Hermitage, who had a personal affinity for Lithuania, and had a number of Lithuanians working at the Hermitage.

Thomas Krens, who was the director of the Guggenheim at the time, was introduced to us by a Lithuanian- American philanthropist, Audrey Gruss. Interestingly enough, Mr. Krens entered our first meeting in New York straight off of a flight back from Abu Dhabi, where he had just completed negotiations. Now, it was Vilnius' turn to present its idea.

When Dr. Piotrovsky came to Lithuania to discuss the project, I remember his words over breakfast at my home when he said, "Abu Dhabi is asking us to partner with them, Kuala Lumpur, Singapore and many others, but we choose Vilnius. We are in." The recognition of Vilnius as an important player in the prestigious world of art and architecture was a heady moment.

So, you see, both cities, Vilnius and Abu Dhabi, were in competition for the Guggenheim and the Hermitage. That might be the reason that Abu Dhabi chose to build the Louvre first and not the Guggenheim.

After long and hard negotiations, Abu Dhabi proudly announced that an agreement had been reached with the French authorities and the Louvre Museum had granted them the right to use the Louvre name. The agreement, which included an obligation to lend works of art and organize exhibitions, cost Abu Dhabi 430 million euros for a thirty-year period of time. The cost of the entire project is 1.2 billions USD.

Of course, questions arise as to how much it would have cost Vilnius for the right to use the Guggenheim's and Hermitage's brand names and to actually build the museum. Sometimes, the axiom "when you have no money, everything costs less" proves to be true. The rights to both brand names would have cost Vilnius one million dollars a year. A ten-year time period had been preliminarily agreed upon. The construction of the museum along with fixing up the area around it would have cost approximately 120 million euros. The size of the museum was 12,000 sq. m. For comparison purposes, the Latvian government built an impressive national library that cost approximately 290 million euros and construction was not interrupted even during the economic downturn.

Vilnius' plans at the time had captured the world's attention with articles in the New York Times and international art publications, discussions among experts and politicians not only in Lithuania, but also well beyond its borders.

I had the opportunity to talk about Vilnius' plans on a number of occasions with representatives from the UAE, among them H.E. Sultan Al Jaber, whom I met a few years ago in Vilnius and to whom I am most grateful for the invitation to one of the most important cultural events of the 21st Century – the opening of the Louvre Abu Dhabi.

It is well worth your while to visit the museum. The incredible architecture of a building that looks like it is rising up from the sea is astonishing. The impressive opening exhibition has on display the beginning of man's civilization that started 6500 years BC and contains one of the oldest works of art – a two-headed statue from Ain Ghazal in Jordan.

Displayed in the Gallery of World Religions are a 6th Century Quran, a Gothic Bible, a Yemeni Torah, Buddhist sutras from Eastern India and Taoist writings. The sacred texts facing each other are open to verses that give analogous accounts and highlight our similarities. In a world where it is fashionable to stress differences and even fight over them, this museum is a meeting of East and West that provides a common space for all under a light filled dome.

As I boarded my plane back to Vilnius from Abu Dhabi, I mulled over yet again why Vilnius had lost to Abu Dhabi and it did not have anything to do with a bounty of oil resources or a lack of them. There were a number of reasons, but the primary one was political. Political moves in Lithuania often seek to destroy rather than to build. In 2007, I lost my bid for re-election as mayor of Vilnius and the capital city's leadership was taken over by people who did not care about the plans we had made and did not understand their usefulness for the country as a whole. After a few years of silence from Vilnius, the Guggenheim withdrew from the project because it had received an invitation from Helsinki to partner on a museum in the capital of Finland.

In 2012, after a successful return to office, I tried to revive the Vilnius project. The Hermitage agreed to continue the project even without the Guggenheim's participation and we signed a formal agreement in the Winter Gardens of the Hermitage. We used the code name of "HeMe" for the project. It stood for the Hermitage Mekas Museum. Together with the Hermitage we would have started to build our own Lithuanian global cultural brand – the Mekas Museum.

However, we ran into a quagmire of bureaucracy back in Lithuania and resistance from several authorities. We weren't successful in keeping the project alive until the next round of European Union funding and were in the midst of a lawsuit against the national government for its unfairly small allocation of funds to the city of Vilnius.

But, there is also a bright side. The conversion of the Sports Hall into a conference and convention center started after we convinced the national government to buy the building and prepared plans that were appropriate for its reconstruction. The project for a concert hall at the top of Tauras Hill is still alive. The city of Vilnius tried to buy the building from 2012-2014, but the process was stopped by government prosecutors. Negotiations have now been renewed and perhaps they will be successful. Our plans were for a concert hall and a center of modern Lithuanian history that would open by 2018, when Lithuania will celebrate the centennial of its declaration of independence.

One of the competitors in the international Hermitage Guggenheim Museum competition, Daniel Libeskind, has designed a Museum of Modern Art for Vilnius that is being privately funded by the Butkus family.

Some ideas do continue to live on. And so, the journey continues.

Vilnius Mayor Remigijus Šimašius has admitted that the road services of the Lithuanian capital...

The Vilnius administration should hold partnership negotiations with Italy's Gemmo for another four...

A memorial to freedom fighters resembling a forest and guerrilla bunkers will be built in the central...