Veryga urges parliament to suspend work for at least 2 weeks

BNS
aA
Lithuania's outgoing Health Minister Aurelijus Veryga has called on the Seimas to suspend its work for at least two weeks amid a coronavirus outbreak in the parliamentary group of the Liberal Movement, a member of the new center-right government coalition. 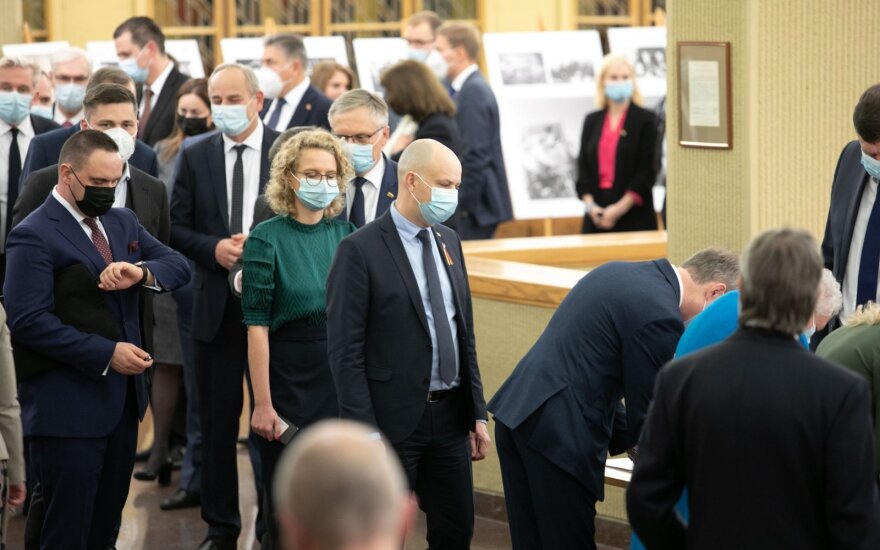 Veryga's appeal to the ruling bloc came on Thursday evening after Viktorija Cmilyte-Nielsen, the Liberal speaker of the Seimas, confirmed having tested positive for the virus.

"You must take measures immediately and suspend the work of the Seimas for at least a couple of weeks," the minister posted on Facebook.

"Passing resolutions, creating parliamentary groups for friendship with X or the division of posts is not a priority now. The priority now is making a pause. It is possible to contain the outbreak in two weeks."

Veryga called on lawmakers to cooperate with epidemiologists from the National Public Health Center and go into isolation to prevent the virus from spreading further.

The minister said it was "more than clear" that the coronavirus outbreak had started in the Liberal Movement, criticizing the party for failing to follow social distancing guidelines.

"Unfortunately, there was no responsibility on their part. They continued to attend meetings, interacted and risk the health of other colleagues in the Seimas. They managed to communicate with the presidents of Lithuania and Poland, too," he wrote.

"My colleagues from the (Liberal Movement's parliamentary) group have received negative test results, but I am joining the ranks of the infected," Cmilyte-Nielsen wrote on Facebook earlier on Thursday, adding that she had developed no symptoms of COVID-19.

Three other members of the Liberal Movement's parliamentary group – Viktoras Pranckietis, Gintaras Vaičekauskas and Jonas Varkalys – have posted positive for the virus in recent days.

The Lithuanian government will be asked to extend the nationwide lockdown for at least three...

The Lithuanian government is planning to extend the nationwide lockdown , in place since November...

Veryga: lockdown isn’t working as much as we would like to

The existing lockdown is not working as much as it is desirable, acting Lithuanian Health Minister...

Lithuania's outgoing government on Wednesday extended the nationwide lockdown , in place since...