BNS
aA
United States President Donald Trump pledged on Tuesday that the US would periodically station troops in the Baltic states in an effort to deter Russia. 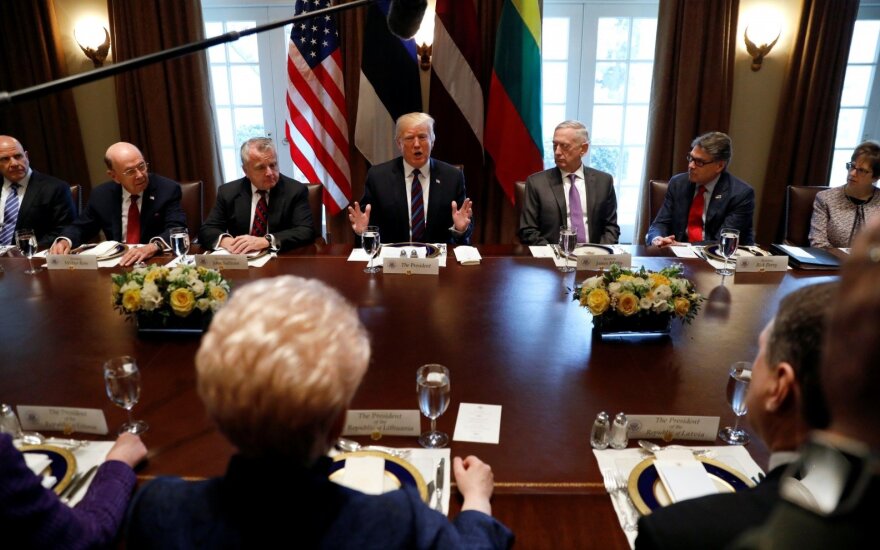 At the meeting in Washington D.C., the presidents of the US, Lithuania, Latvia and Estonia also stated they would search for new ways of enhancing regional air defense on both bilateral grounds and in the NATO format.

"The United States of America intends to continue periodic deployment of forces to the Baltic States to strengthen deterrence and to catalyze the efforts of Estonia, Latvia, and Lithuania to develop their national defense," reads a joint declaration approved at the meeting.

"We continue to explore new ideas and opportunities, including air defense, bilaterally and in NATO, to enhance deterrence across the region," the four presidents said.

Related articles
Baltic presidents' meeting with Trump: 3 topics
President regarding Washington visit: a summit meeting of this level is happening for the first time

The US had deployed a company of troops in all three Baltic states in the 2014-2017 period, however, the troops were pulled out to Poland after other Allies placed a NATO battalion in each of Lithuania, Latvia and Estonia. The US troops now arrive for training on irregular basis.

Lithuanian officials want US troops to be permanently stationed in the country. The Tuesday's wording about periodic deployment means that major changes are unlikely in the nearest future.

In an effort to enhance air defense, Lithuania has been inviting the US to bring their Patriot air defense systems, which are capable of taking down aircraft or ballistic missiles. The Baltic nations also want to be included in a joint air defense shield.

Lithuania's diplomats say the mention of development of air defense in the declaration is the first US commitment of this type, which is important to secure progress during the NATO summit scheduled for July.

In the declaration, the US also restated its "ironclad commitment to Article 5 of the Washington Treaty," which consolidates the principle of collective defense.

Trump had caused concerns in the Baltic states after criticizing NATO and speaking warmly of Russian President Vladimir Putin, however, his decision to supply arms to Ukraine and expulsion of Russian diplomats cleared some of the concerns.

Ahead of the meeting of United States President Donald Trump with the leaders of Lithuania, Latvia and...

President regarding Washington visit: a summit meeting of this level is happening for the first time

Trump to meet with Baltic presidents in Washington

The presidents of Lithuania, Latvia and Estonia will meet with the leader of the United States...

Decisions on Baltic air defence must be made faster – foreign minister

Lithuania expects to achieve by mid-2018 a breakthrough in NATO talks on the Baltic Sea region's air...

Contract on medium-range air-defense systems NASAMS to be signed on Sep. 26

Lithuania's Armed Forces will Thursday sign a contract on acquisition of Norwegian medium-range...