BNS
aA
Belarusians demand a new presidential election and the authorities must hear their voice, Svetlana Tikhanovskaya, the opposition challenger in Belarus' disputed presidential election, said in Vilnius on Friday, adding that other states cannot interfere in her country's affairs. 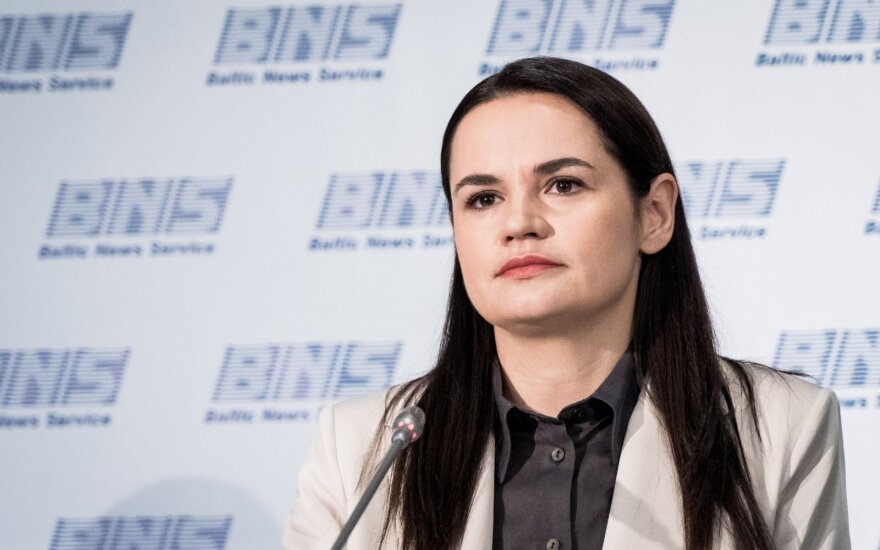 "A new election must be held. (It must be) free, fair and transparent. This is what the people of Belarus demand (and their demand) must be heard," she told a news conference organized by the Baltic News Service.

Tikhanovskaya, the main challenger to Alexander Lukashenko in the August 9 vote, said a new election was the key goal of hers and the opposition.

"I do hope and believe that the leadership will hear their people. Because we have always been told that the president loves his country and his people, and what he sees now makes it clear to him that people want change," she said.

"I do hope that good sense will prevail and the people will be heard and that dialog will begin and there will be a new, transparent election."

Tikhanovskaya underlined that foreign countries – neither Russia nor others – could not interfere in the affairs of her country.

"I want to thank all the countries that support Belarusians in their aspiration to defend their rights, but I want to reiterate my call on all countries to respect the sovereignty of our nation," she said when asked by reporters about sanctions against the Minsk regime.

Tikhanovskaya also urged an end to violence in Belarus and the release of political prisoners.

People in Belarus are now beaten only because they express their opinions and are put behind bars for taking part in peaceful demonstrations, according to the opposition candidate.

Belarus has awakened and people no longer want to live in fear and lies, Tikhanovskaya said.

"Our common goal is simple. We no longer want to live in fear and lies. We want what every person in the world has the right to: to live, not to be beaten on the streets, not to be put in jail without a trial, and to have democratic and transparent elections," she told reporters.

Tikhanovskaya said she would return to Belarus when she felt safe.

"I love my homeland so much; I really want to go back. I'll definitely return when I feel safe," she said.

Tikhanovskaya said she did not want to speak about threats against her and her family.

"I think everyone in our country is scared, but it is our mission to overcome our fears and move forward," she said.

Tikhanovskaya said she did not want to remember the night when she was force to leave Belarus.

The political novice said she had entered the presidential race to replace her husband and did not comment on whether she would run in a new presidential election.

The woman arrived in Lithuania early last week after the presidential election in Belarus and had to spent some time in isolation. She was later tested for the coronavirus and the result came back negative.

While in Vilnius, Tikhanovskaya urged leaders of European countries not to accept the results of the August 9 election in Belarus and vowed that the Coordination Council she had initiated would soon call a new election with the presence of foreign observers.

Belarus' Central Electoral Commission, loyal to Lukashenko, announced that the authoritarian leader had been re-elected for a sixth term with 80 percent of the vote and that Tikhanovskaya had only received around 10 percent.

The result, dismissed by the opposition and Western countries as rigged, sparked mass protests in Minsk and other Belarusian cities.

Several thousand protesters were detained by law-enforcement bodies within several days after the election, and some of them have already been released. There have been reports of police using violence against detainees.