(1)
BNS
aA
Vilnius is hosting a state funeral ceremony for the commanders and participants of the 1863-1864 uprising on Friday. 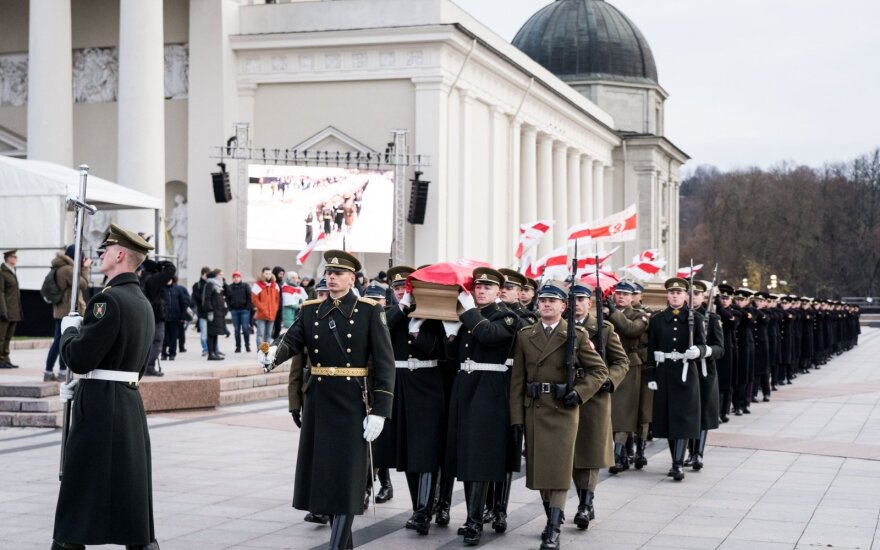 Led by Lithuanian and Polish guard troops, the coffins with the remains of Zigmantas Sierakauskas (Zygmunt Sierakowski in Polish) and Konstantinas Kalinauskas (Konstanty Kalinowski), the leaders of the Lithuanian uprising, as well as those of another 18 uprising participants were taken from the Palace of the Grand Dukes of Lithuania to Vilnius Cathedral.

Several hundred Belarusians holding white-red-white national flags of Belarus, often used by the opposition to the existing regime, gathered outside the cathedral at the beginning of the ceremony.

Pavel Konovalov, who came from Belarus, told BNS Lithuania that the funeral of the uprising participants is a three-state celebration for him.

"They are our national heroes. Heroes of our three nations of Lithuania, Poland and Belarus. I am here because all of this is in my heart," the 31-year-old construction worker said.

Julija Pilipiuk, 25, is only a passer-by but her father is Ukrainian and this ceremony is also important for her.

"I was just passing by. I think these are people who sacrificed their lives for our freedom, therefore, we need to respect them. It's a beautiful ceremony evoking warm feelings," the young businesswoman who finished microbiology studies abroad said.

Pensioner Kazimieras Jankunas watched the start of the funeral ceremony with a camera in his hands. In his words, it's very important that the remains were found and can now be buried.

"It's our history. One cannot say anything else. It's a certain signal about fight against tsarism. We now remember that and want to say goodbye to the uprising participants. It's important that their remains were found," the 78-old-man told BNS Lithuania. "It’s an important ceremony for Belarus, Ukraine, Poland and Lithuania. It's a memory of out common past."

The remains will be taken in a procession from Vilnius Cathedral to the old Rasos Cemetery with a stop at the Gate of Dawn on the way after noon.

Members of the public will be able to observe the ceremony in large screens, and it will be also broadcast by Lithuanian and Polish TV.

The Lithuanian-Polish uprising against the Russian Empire took place in 1863-1864. Its commanders were executed in 1864 and their remained were found inside Gediminas Hill in central Vilnius in 2017.

Polish President Andrzej Duda is coming for a two-day visit to Lithuania on Thursday.

Duda in Vilnius: Central European nations' unity is necessary foundation of their freedom

The unity of Central European nations is a necessary foundation of their freedom, Polish President...