Teachers to stage protest as minister calls for talks

...
BNS
aA
As Lithuanian Education, Science and Sport Minister Algirdas Monkevicius is calling a meeting with five trade unions over a collective agreement on Thursday, some teachers are staging a protest outside the ministry in Vilnius. 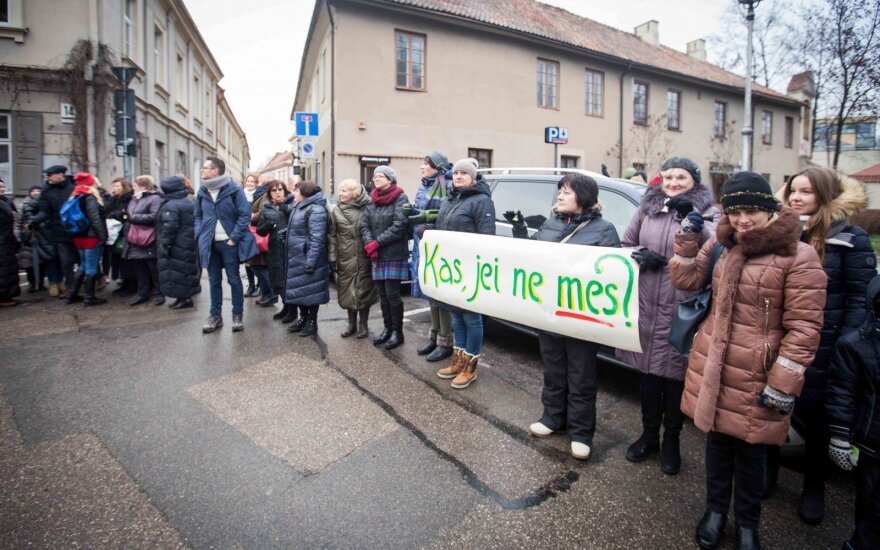 Dozens of pumpkins will be lit up in front of the ministry building during the symbolic protest action organized by the Lithuanian Education and Science Trade Union (LSMPS), which has earlier announced plans to go on strike this year.

The glow of pumpkin lanterns "will help politicians wandering in the dark labyrinths of budget adoption to make decisions favorable to the education community," the trade union, led by Egidijus Milesinas, said in a statement.

According to LSMPS, the Education Ministry pledged to allocate an additional 118 million euros for teachers' salaries next year under the collective agreement signed earlier this year, but the government's 2020 budget bills earmarks only 55.5 million euros in extra funding.

Prime Minister Saulius Skvernelis says the commitments were not included in the budget bill because the Education Ministry had not been authorized by the government to sign the agreement.

The Lithuanian Education Employees Trade Union, led by Andrius Navickas, is also considering going on strike if it fails to sign a new bilateral collective agreement with the ministry. The trade union led a strike in late 2018.

Monkevicius, who is meeting with LSMPS and four other education sector trade unions on Thursday, has named a pay rise for teachers as his priority.

"I am inviting the education and science community to sit down and solve the situation," he said.

Teachers to strike over new pay system in Lithuania in November

Teachers will start a termless protest against the new pay system on Nov. 12, the Lithuanian...

Teachers from around 50 schools in Lithuania are taking part in a two-hour warning strike on Friday.

Education minister vows to resign if teachers' demands are not met

Vilnius University (VU) said on Tuesday it will shut down for two days later this week in protest...