(1)
BNS
aA
Supporters of Jonas Noreika, a controversial Lithuanian military officer known as Generolas Vetra (General Storm), on Thursday night reinstalled the memorial plaque removed from the facade of the Wroblewski Library of the Lithuanian Academy of Sciences in central Vilnius in July. 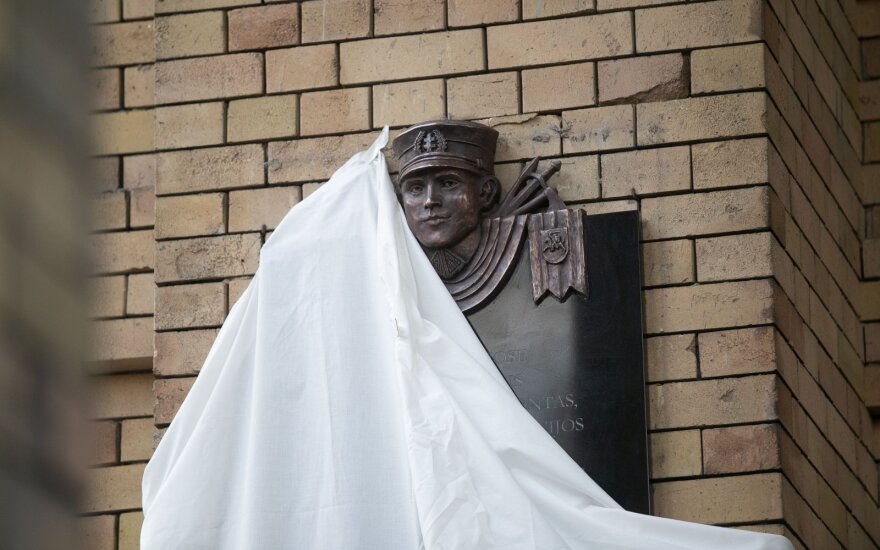 The unveiling of the reinstalled plaque was observed by several hundred people who sang patriotic songs and chanted "Noreika, Noreika!" Sound equipment was brought to the unveiling ceremony which also involved several speakers.

Differently from the old one, the new plaque features an inscription that Noreika was a prisoner of the Nazi concentration camp in Stutthof and was executed on February 26, 1947.

Jonas Burokas, the former honorary chairman of the Lithuanian Union of Freedom Fighters, told BNS Lithuania at the event that a nongovernmental organization, "Pro Patria", mainly took care of the production of the new plaque.

Over a dozen of police officers observed the reinstallation and filmed the whole process. Ramunas Matonis, spokesman for the police, told BNS Lithuania that police officers film events to clearly identify the persons who hanged the plaque.

"The material will be handed over to responsible institutions," he said, adding that those institutions will decide if the plaque was reinstalled lawfully.

As the plaque to Noreika was reinstalled, some 300 people took part in a protest in Simonas Daukantas Square outside the Presidential Palace against the local authorities' decisions regarding the commemoration of Noreika and Kazys Skirpa, a controversial 20th century Lithuanian diplomat and military officer, due to his declared anti-Semitic views, because of their alleged involvement in the persecution of Jews during WWII.

The controversial plaque to Noreika, which was in place for more than two decades, was removed in late July by the decision of Vilnius Mayor Remigijus Simasius. He said he made the decision as Noreika, as head of Siauliai County during the Nazi occupation period, signed documents on the establishment of a Jewish ghetto and on arrangements regarding Jewish property.

Noreika was later arrested for anti-Soviet activity and executed in February, 1947.

In 1997, Noreika was posthumously awarded a 1st degree order of the Cross of Vytis.

Several hundred people rally in Vilnius against removal of commemorations (3)