...
Paul Goble, Eurasia Daily Monitor
aA
It has often been remarked that politics can make strange bedfellows, bringing together groups that one could not imagine agreeing on anything. That is what has been happening in Latvia, where Latvian nationalists and ethnic-Russian residents of that Baltic country—for quite different reasons—both support restricting any further immigration into Latvia from the Russian Federation. 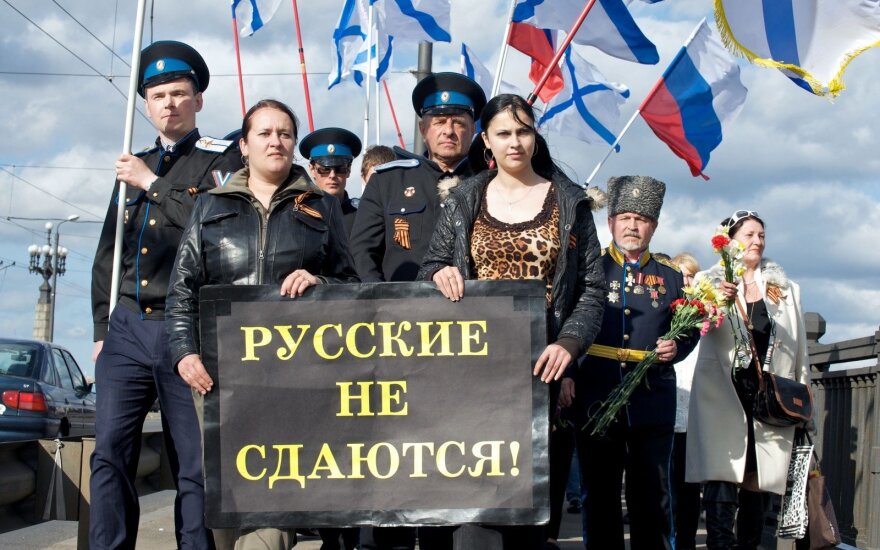 The case is instructive for what it says about the evolution of Latvian politics as well as for what it shows about the nature of ethnic-Russian identity, an identity that is far more divided and a matter of contention than many commentators in Russia and the West think.

As Baltikom radio host Vadim Rodionov points out, last month’s decision by the Latvian parliament (Saeima) to introduce new barriers for recent Russian immigrants to remain in the country represents “a rare example of the unity of opinions of Latvian nationalists and ‘old local Russian speakers.’” Indeed, he suggests, he personally cannot remember a single other case of this kind over the last 25 years.

The Saeima had voted to require those Russians who received permanent residency status in Latvia as a result of purchasing property or investing there to pay an additional €5,000 ($5,580) for each member of their family every five years to retain that status. Many Latvians have long been upset by the earlier legislation that allowed Russians to move into their country if they had enough money to buy property. Not only did these Latvian groups not want to see more Russians enter, but they also felt that this arrangement corruptly benefited the Latvian elite by, for example, pushing up property prices.

That Latvian nationalists might want to stem the inflow of Russians to their country will come as no surprise. What is more remarkable, however, is the fact that Latvia’s longtime ethnic-Russian residents—citizens and non-citizens alike—also express such a preference. One might have expected them to welcome the arrival of more of their co-ethnics, both to boost the Russian share of the population and to increase the influence of that community on Latvian political life. But they clearly do not—and for reasons that are instructive about the nature of ethnic-Russian identity today.

The Saeima’s move has meant, Rodionov says, that “new Russians,” as those who have recently come in under the previous rules are referred to, and “old Russians,” that is, those who have been living in the country for a long time, are actually standing “on different sides of the barricades.” Hence, the “old Russians” are making common cause with their longstanding opponents—Latvian nationalists.

This division of the Russian-speaking community in Latvia has involved the formation of “stereotypes” by both the old and the new. “Naturally,” such stereotypes do not involve everyone on the two sides, but their development has been briskly gaining prominence within the past year. The difference between the two groups boils down to this: “Many ‘oldsters’ idealize [today’s] Russia, celebrate it, and consequently consider ‘those new ones who have flooded in’ to be shameful traitors,” because the new arrivals make no secret of the fact that they want to escape Vladimir Putin’s Russia.

The Russian speakers who have lived in Latvia for a long time have two other reasons for taking this position, Rodionov suggests. On the one hand, they feel that “the newly arrived want to please the Latvian part of society excessively and therefore over-idealize Latvia. In a country where society is divided ethnically, this factor plays a big role.” And on the other, at least some of them are motivated by simple envy: few of “the oldsters” have the money to make the kind of investments the new arrivals do.

The “new Russians” have exacerbated the situation by behaving less than respectfully toward the “old” ones, often referring to Latvia’s Russians as “zombified” or by other “unpleasant epithets.” And the legislation, whatever its future course may be, has deepened this split and intensified anger on both sides.

Over the past several years, Latvia, like its Baltic neighbours Estonia and Lithuania, has become the favoured place of exile for those Russians seeking to leave Vladimir Putin’s increasingly authoritarian state. Indeed, many people in those countries and elsewhere are drawing comparisons with the Russian emigration to the Baltic countries nearly a century ago, following the Bolshevik revolution. And it is commonly known that the members of today’s new immigrant community in Latvia typically draw a sharp distinction between themselves, as democratic and capitalist Russians, and the ethnic Russians who have lived in the Baltic countries for a long time. That the latter are perceived differently in such a way reflects both the “old Russians’” life experiences as well as the tensions between them and the new arrivals.

But the larger point here is this: “the Russian world” Moscow likes to talk about is not a unified whole. It consists of many parts, some of which—as now in Latvia—are at loggerheads. Thus, Kremlin propaganda by itself is unlikely to determine how these various parts will or will not cooperate in the future.