Several hundred people rally in Vilnius against removal of commemorations

(3)
BNS
aA
Several hundred people rallied in Vilnius on Wednesday to protest against the city administration's decisions to remove commemorations to two officials who were allegedly involved in the Holocaust during World War Two. 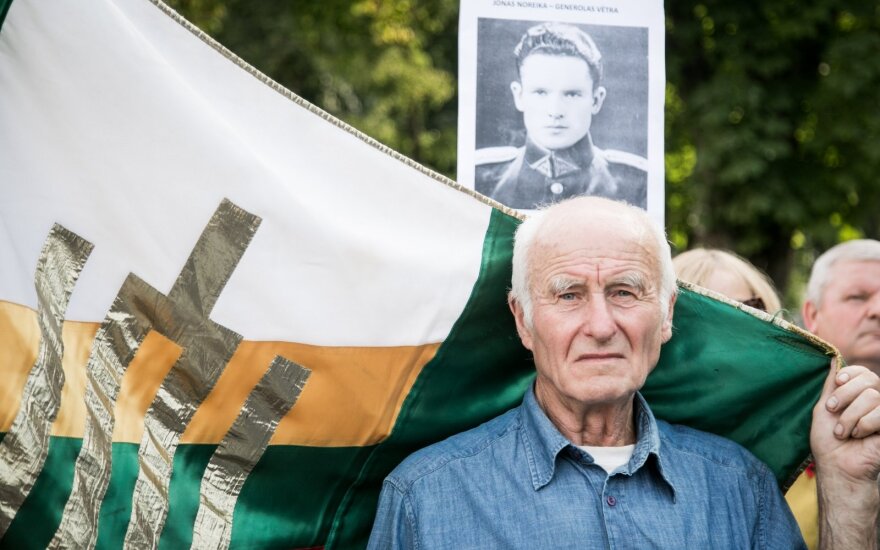 Participants of the rally in central Vilnius called on the city's authorities to restore the name of a street to Kazys Skirpa Alley and reinstate a plaque honoring Jonas Noreika for his resistance to the Soviet occupation.

Angele Jakavonyte, the daughter of a participant of the post-war anti-Soviet resistance, called on politicians "not to belittle patriots" and to properly commemorate people who fought for the independence of Lithuania.

Related articles
Landsbergis about Jewish community leader: she has no clue what she's doing
Prime Minister calls for law enforcement to respond after Jews speak about threats  (1)

"Let us not forget the heroes of our nation," the protester said.

The memorial plaque to Noreika, a pre-war Lithuanian military officer and an anti-Soviet resistance fighter known as Generolas Vetra (General Storm), was taken down from a wall of the Wroblewski Library of the Lithuanian Academy of Sciences in late July.

Mayor Simasius said he ordered to remove the plaque in view of the fact that Noreika, as head of Siauliai County during the Nazi occupation period, put his signature on the Nazi administration's decisions to set up a Jewish ghetto and expropriate their property.

The move came after Vilnius' City Council decided in late July to rename a small street named after Kazys Skirpa, a 20th-century Lithuanian diplomat and military officer, due to his declared anti-Semitic views.

"Noreika and Skirpa are our heroes who fought for Lithuania," said Renata, a 35-year-old protester who declined to give her last name.

Giedrius Laucius, an 80-year-old pensioner, said he was angered by the city's decision to remove the commemorations without proper public discussion.

"Such things are inadmissible," he said.

Amid heightened tensions, the LJC announced on Tuesday it was closing, for an indefinite period of time, the Vilnius Synagogue and its headquarters due to threats.

The Jewish Community of Lithuania said on Thursday announced it was reopening its headquarters and...