BNS
aA
In response to expulsion of three Russian diplomats from Lithuania, Moscow has decided to send out an analogous number of Lithuanian diplomats. 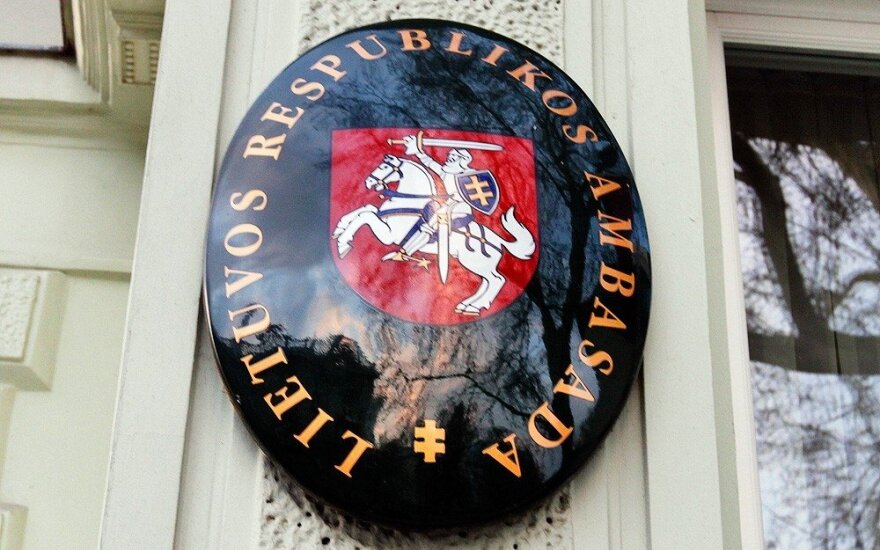 An Embassy of the Republic of Lithuania
© Augustas Didžgalvis

"He (the ambassador to Russia) has been notified that three employees of the Embassy to Moscow would be sent out," Lithuania's Foreign Minister Linas Linkevičius told Vilnius journalists on Friday.

In his words, Moscow's response is not equivalent, as the number of Russian diplomats working in Vilnius is considerably higher than that of Lithuanian diplomats in Russia.

According to information provided by the Foreign Ministry, the Russian Embassy to Lithuania includes 33 employees, in addition to seven diplomats working at the Consulate General in the port city of Klaipėda.

Meanwhile, 15 diplomats work in Lithuania Embassy in Moscow, five at the Consulate General in St. Petersburg, nine in the consulate in Kaliningrad and two in the consulate in Sovetsk.
Linkevicius said that the employees of the Lithuanian Embassy who are about to be sent out were not engaged in any activities inconsistent with diplomatic duties.

"We do not have any intelligence officers there working under disguise and have no plans of having them," said the minister.

A few dozen countries this week announced they would expel around 150 Russian diplomats in sign of solidarity with Great Britain over poisoning of a former double spy.

Moscow said it would make an analogous response to all countries that had sent out its diplomats.

Linkevicius said that the response of Western countries to the poisoning of Sergey Skripal was a sign of their patience running out.

He expressed hope this would make Moscow change its course.

"Even the countries that were tolerant, compliant and always called for some type of pragmatism in the relations – even they ran out of argumentation to justify the actions," said the Lithuanian diplomacy chief.

"We expect Russia to hear the signals and possibly change their course to stop calling this escalation and accusing other countries for this," he added.

Lithuania announced on Monday it would send out three Russian diplomats, giving them a week to leave the country.

London says that it is very likely that Russia is behind the poisoning of former double agent Sergey Skripal and his daughter, while Moscow denies the allegations.

Lithuania also added dozens of Russian citizens to the so-called black list of persons barred from entering the Baltic state.

Another 21 persons were added to the so-called Magnitsky list, in addition to 23 persons banned from coming to Lithuania as potential threats to national security.

Lithuania's Ambassador to Russia Remigijus Motuzas was summoned to the Russian Foreign Ministry on...

US president to praise Baltic nations for defense spending - diplomats

US President Donald Trump will show the Baltic nations as a model for other European countries in...

R. Juknevičienė: the greatest irritant for Russia is an empty security area

Russia's ambassador in Vilnius says that Lithuanian intelligence reports are an attempt to justify the...