...
BNS
aA
Lithuanian MP Irina Rozova says an intelligence report based on which she was denied access to classified information contains nothing to indicate that she posed a threat to national security. 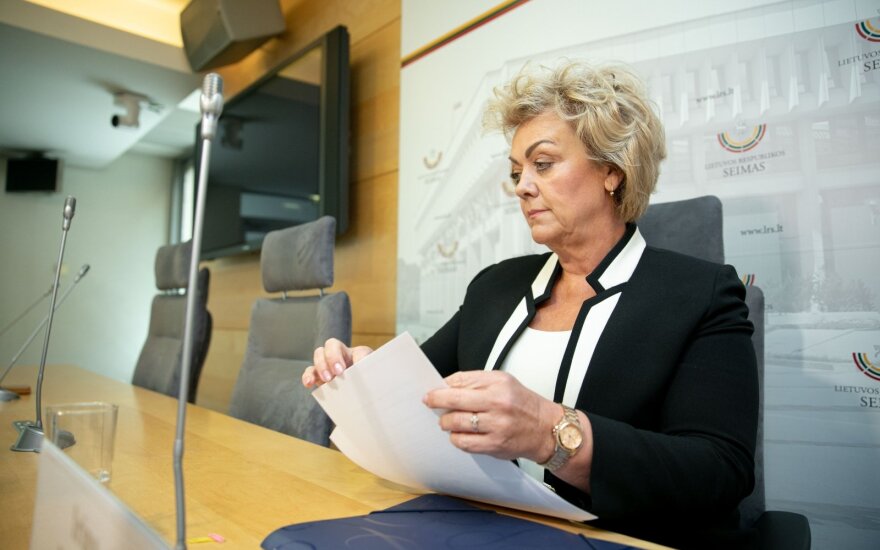 "I was not convinced by what was written in that answer, because some meetings I had were described, but I did not notice any real actions that would make me a threat to national security," she told the Seimas Committee on National Security and Defense on Wednesday.

Rozova testified as part of an ongoing investigation into the possible threat to national security posed by her ties with Russian diplomats.

The committee now plans to produce a list of other persons it wants to question and will also ask the Seimas to extend the investigation until April. Currently, the committee is supposed to finish its work by December 1.

Speaking on Wednesday, Rozova said in her response that her ties with Russian diplomats were not of personal nature, therefore, she did not think she should have declared it in the State Security Department's questionnaire.

Dainius Gaizauskas, the committee's chairman, asked the MP at the start of the hearing if she agreed with the arguments put forward in the report by the SSD to Viktoras Pranckietis, the speaker of the Seimas.

Rozova said she was not convinced by the report, adding that during her meeting with Speaker of the Seimas Viktoras Pranckietis over the SSD report, she heard from the parliament leader that there was "nothing serious" in it.

Speaking about her contacts with expelled Russian Consul General Vladimir Palygin, Rozova said she did not suspect that he could have worked under a diplomatic cover.

"I cannot evaluate Malygin as being guilty of something. I learnt, just like all citizens, about it from the press. He was Russia's consul in Klaipeda, we met at various events, concerts, exhibition opening," Rozova said. "There were no conversations with diplomats that could have led to some suspicions against me. I am perfectly aware of my civic responsibility and about what I can discuss with whom."

Asked about other Russian diplomats she had contact and ties with, Rozova did not mention specific names but said they were the embassy or consulate employees.

But Rozova confirmed that during her meetings with Russian diplomats she consulted about her son's medical studies in Russia, adding, however, that "nobody asked me for any favors or any information from me".

Based on intelligence information, Rozova attempted eight years ago to get Russian diplomats involved to impact the formation of coalitions at Vilnius City Municipality.

"We faced a major problem as two Russian Alliance representatives who got onto the Council under our list with the EAPL, were ignoring decisions by the party's board and agreements with the EAPL and independently signed an agreement with Arturas Zuokas, meaning that they in fact took the side of their party and weakened Tomasevski' negotiating position on the formation of a ruling coalition," Rozova explained the situation.

The politician confirmed that failure to take the situation in Vilnius under controlled the party to ask the Russian Embassy to get involved.

"We tried to convince the representatives of the Vilnius branch but unsuccessfully. We made that step and we tried to turn to the Russian ambassador to inform about the situation and explain that those people were discrediting our political movement and diaspora in Lithuania. Perhaps it was not a well-considered decision but we were confused and embarrassed in the eyes of our political partners and also voters," Rozova said.

Asked what she expected from the embassy, Rozova said that "it was probably a naïve step as we hope that they would talk to those people and they will get back to their places".

The parliamentary investigation was initiated after it came to light that VSD had recommended in its report to Pranckietis that MP Rozova be denied access to classified information.

The report says that Rozova and Russian diplomats discussed financial support for her party, the Russian Alliance and that she had contacts with Russian Consul General Vladimir Malygin who was sent out of Lithuania in 2014.

The investigation will also look into whether the information about Rozova's ties that SSD provided to Pranckietis and some other MPs was properly used. The committee completed interviewing the SSD officials in late October and has now resumed hearings after a break for budget debates.

Rozova is a member of the Electoral Action of Poles in Lithuania – Christian Families Alliance's political group in the Seimas.

Members of the Lithuanian parliament's Committee on National Security and Defense (CNSD) are...