Robert van Voren, Director of the Andrei Sakharov Research Center for Democratic Development at Vytautas Magnus University,
DELFI EN
aA
There are news stories that you read and for some reason stay with you for a long time. They trigger an emotion inside as if they touched a button, a sensitive spot. 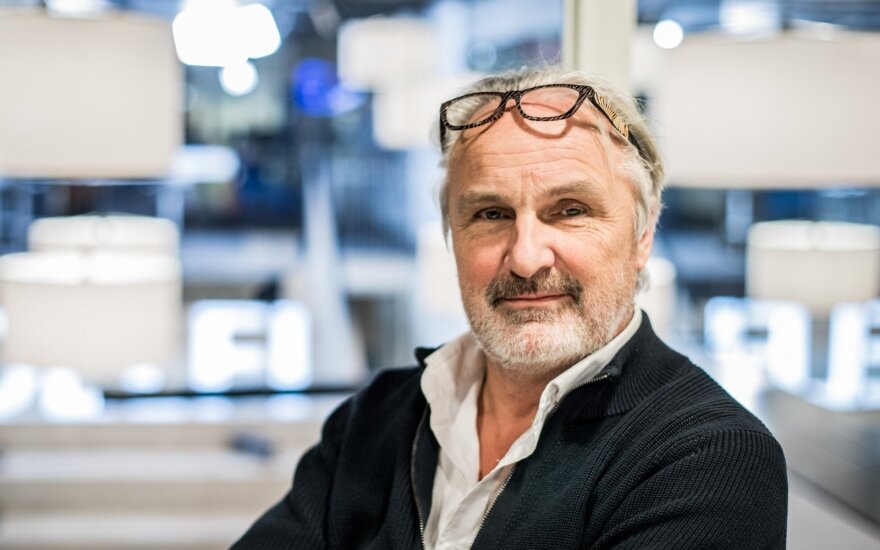 Some days ago I read such a story. One of the Dutch national news portals carried a story with a photograph, showing a man on a hospital bed outside a house, while a woman was waiving at him from behind the window, standing between the curtains. The story reported on the fact that the man was terminally ill and had not been able to see his wife for seven weeks because of COVID-19 restrictions. A special program had been set up by an ambulance service to fulfil the last wish of dying people, and this man had been transported to his house to say goodbye to his wife. The last farewell before dying - through a glass window…

To me, the story illustrated perfectly the sometimes harsh and unnecessary isolation rules that have been imposed by governments on their populations. In The Netherlands, where rules are less strict than in many other countries, the government forbade any visits to elderly people in nursing homes and palliative care centers for the terminally ill, without any discussion with those working in that sector, let alone with the inhabitants themselves. To make things worse, when the scarce Personal Protection Equipment was distributed, medical facilities were prioritized, but nursing homes were overlooked. The result was that many professionals working in these centers contracted COVID-19. At the same time, a growing number of elderly people complained, saying that they rather see their children and die from COVID-19, than spend months withering away in loneliness while they might have only a year or less to live. Keeping a dying man away from his wife for almost two months, and then only allowing him to say farewell forever (!) through a glass window is, to me, a prime example of inhumanity.

There are, of course, decisions of indisputable stupidity. Two superpowers are run by presidents that are champions to that effect. The American President Donald Trump is ignoring all warnings of his top immunologist Anthony Fauci and the Center for Disease Control. While the pandemic is still raging in his country and killing more than anywhere in the world, he is pushing to open up the economy, mainly out of fear that with a country sinking into a depression he might not win the upcoming election. The former Director of the Biomedical Advanced Research and Development Authority Dr. Rick Bright, ousted by Trump because of his criticism of Trump’s handling of the pandemic, warned before US Congress that the country is set to enter the “darkest winter in modern history” because of the very real chance of a second and even more deadly wave of the pandemic. However, nothing stops the US President from supporting gun-waving demonstrators who demand that life returns to normal when nothing is normal anymore. The President of a superpower on the other side of the Atlantic, Russia, is not faring much better. In his unending wisdom, he has ordered his country back to work at the moment when the pandemic is out of control and outdoing even the United States in numbers of daily new cases.

These are self-evident cases of ill-advised decisions, but also on a lesser scale, there are decisions that one can seriously question. They will probably form the basis of investigative studies or parliamentary commissions afterwards when life is more or less back to normal. Sweden is widely criticized for not imposing a lockdown on the population, and their number of dead per 100,000 citizens are considerably higher than those of the other Scandinavian countries.

However, one also has to admit that they are also considerably lower than those of Spain, France and Italy and even than those of the United Kingdom, all countries with strict lockdown regulations. In The Netherlands, there are growing complaints from prisoners and their families that contact is severely restricted, rules are not uniform and safety measures are sometimes completely ignored. One prisoner, who has no other family member, was not allowed to see his dying father while at the same time construction workers were allowed in to do some repairs. In some cases simple protection materials e.g. hand disinfectant were denied while they were in stock, and security personnel carried out searches without using any protection. Relatives have now gone public with their long list of complaints, but the Ministry of Justice continues to deny that anything is wrong.

Also, in Lithuania, some measures are hard to understand. While the churches have opened, schools continue to be closed and will only open up gradually by the end of the month. It is bearable to children to stay at home for some time if they live in a house with a garden, but when you live with your parents and siblings in a small apartment on the ninth floor of an apartment building somewhere in the suburb, two months of quarantine is killing. The telephone aid lines for children in Lithuania have noticed that the number of calls is down because kids cannot find the privacy to call, but the number of chats is up and so are the cases in which children want to commit suicide. The police has reported an increase in domestic violence, and Europe-wide the number of cases of domestic violence and sexual abuse has skyrocketed. Both France and The Netherlands have now introduced a special codeword for women who seek help: when they say the code in a pharmacy, the pharmacist immediately calls the police.

Keeping children, who are generally considered not an epidemiological threat in spreading the disease, locked up for so long is severely damaging to their mental health, and it is hard to explain why schools are closed while churches are open, where most of the parishioners are of older age who are actually more in danger of succumbing to a COVID infection. This does not only count for a country like Lithuania, but also for countries where the main church is orthodox and, to make it worse, where kissing an icon is part of the ritual. A better way of spreading the disease is hard to imagine.

The COVID-19 pandemic has found the world completely unprepared, in spite of multiple warnings. It has given huge possibilities to authoritarian regimes and rulers who used the panic to introduce supervisory or restrictive measures that will be hard to undo. In my view a key mistake in many if not most countries is the fact that advisory bodies did not include psychologists or psychiatrists, who could have balanced the restrictive measures by pointing out the psychological impact the would have on the population as a whole or specific target groups. Decisions were made without involving those affected. In a special statement from the General Secretary, the United Nations acceded that mental health issues had been overlooked and were indeed becoming a central issue that deserved full attention from national authorities. In mental health, it is now finally becoming good practice to involve consumers of mental health services in the decision making process.

I hope that when the next pandemic hits the planet – and that seems unavoidable – we have learned our lesson and do not start looking at mental health when the damage is already done.