BNS
aA
Lithuanian Prime Minister Saulius Skvernelis has failed to present to President Gitanas Nauseda candidates to his updated government, despite his earlier pledge to do so on Thursday. 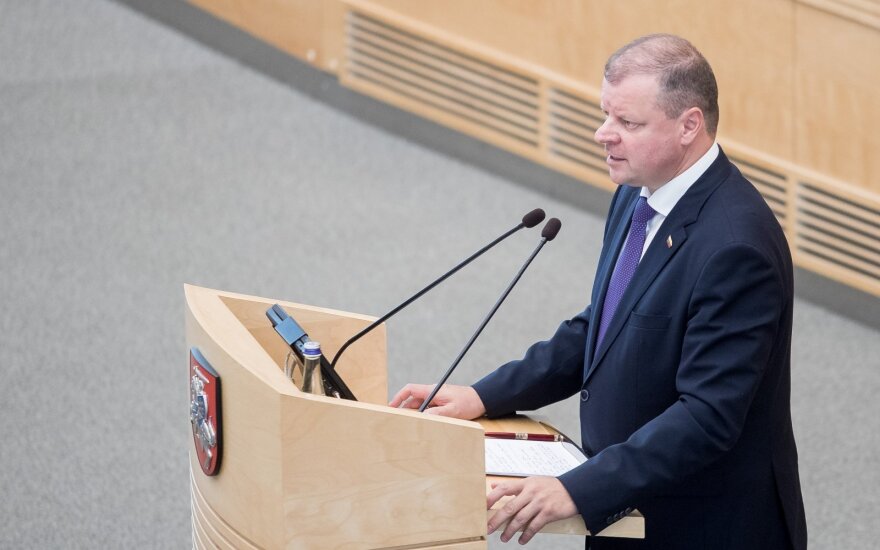 „We still have plenty of time today," Skvernelis told journalists at the Seimas after his meeting with the head of state.

The ruling parties, which agreed on a new coalition agreement several weeks ago, have decided to replace three ministers, including those of transport, interior and agriculture.

It was reported earlier that Vladislav Kondratovic and Jaroslav Narkevic, both representing the Electoral Action of Poles in Lithuania – Christian Families Alliance, would take over the Ministries of Transport and the Interior respectively, and Andrius Palionis of the Social Democratic Labor Party of Lithuania would become the country's new agriculture minister.

Skvernelis himself does not mention any names but says there's already an agreement on them with the president. In his words, the ongoing discussions with the president now focus on the legal details on how the new government should be endorsed.

They also include an option to replace three ministers before the president approves the whole Cabinet. That would mean the Seimas would have to vote on the government's agenda and be introduced to the new ministers as more than half of ministers would have changed since Skvernelis assumed his mandate in 2016.

There's also an option on the table for the president to approve the old government composition with only one minister replaced, and then the others would be replaced later. That would allow avoiding a separate parliamentary vote on the government agenda since the approval of Skvernelis' old government would "reset the ministerial count meter".

There are plans to extend the Seimas' spring session for the new ministers to be sworn in.

"I have to hear the mood in the Seimas, people are tense and tired. I want this (the government renewal process) to be as smooth as possible," Skvernelis said.

In his words, the president plans to meet with "several ministers" he has doubts on, including Health Minister Aurelijus Veryga.

The ruling coalition in Lithuanian now includes the Lithuanian Farmers and Greens Union, the Social Democratic Labor Party of Lithuania, the Order and Justice party and the Electoral Action of Poles in Lithuania – Christian Families Alliance.

Saulius Skvernelis won a confidence vote in the parliament on Tuesday, clearing the way for him...

President: West needs to do everything to deter Russia from invading Ukraine

Western countries need to do everything to deter Russia from possible invasion into Ukraine,...

On Tuesday, 1 793 new COVID-19 cases were detected in Lithuania. Since the beginning of the pandemic,...

On Tuesday, 1 793 new COVID-19 cases were detected in Lithuania. Since the beginning of the pandemic,...

President: West needs to do everything to deter Russia from invading Ukraine

Western countries need to do everything to deter Russia from possible invasion into Ukraine,...