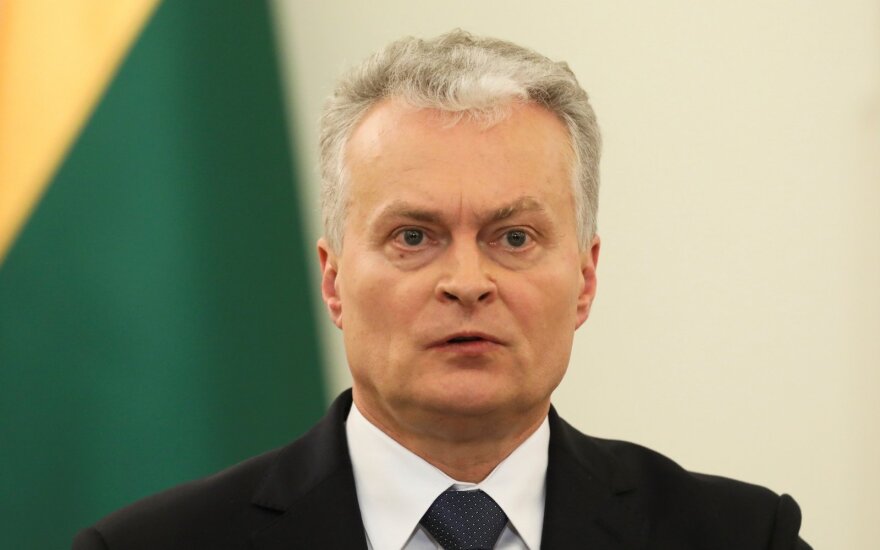 In the diplomatic language, Germany calls Nauseda's visit an official introduction visit. The Lithuanian president will seek to create personal relations with Europe's most influential politician, German Chancellor Angela Merkel. During their meeting, he plans to speak German as Nauseda learnt the language well when he studied in Germany in 1990-1992. He has said earlier that his studies in German formed his strong Western values. The personal touch might be important when Nauseda will have to seek the German chancellor's support for Lithuania during EU summits. Merkel plans to lead the German government until 2021.

Germany is leading a NATO battalion in Lithuania and has deployed some 550 troops. Lithuania is buying 88 IFVs, 18 Howitzers and over 300 trucks from Germany for a total value of almost half a billion euros. Germany plans to invest over 100 million euros into military infrastructure in Lithuania. The Lithuanian army's "Iron Wolf" brigade is affiliated with a German division, and Lithuanian troops in Mali act within a German contingent.

Related articles
Two plus two is not necessarily four: German policy towards the Visegrád countries
Lithuania and Germany: a relationship that is better than ever before

During the visit, Lithuania's wish will be declared to continue deepening military cooperation, and certain military acquisitions might be discussed. Lithuania will also express its support to plans to increase the defense budget as the issue has been raising major political discussions in Germany, with left-wing politicians, in favor of smaller defense spending, say other European countries fear Germany's militarism due to its Nazi past.

Nauseda is due to express Lithuania's concern over the safety of the Astravyets nuclear power plants Belarus is building close to the Lithuanian border. The German authorities usually say they understand Lithuania's wish to seek higher safety standards but, as other EU countries and EU institutions, they rejected the initiative to block electricity imports at the EU level.

Up until now, the two countries' positions on political ties with Minsk have also differed as Germany is in favor of deeper ties with the Belarusian authorities to counterbalance Russia's influence and get access to its market, and Lithuania's former President Dalia Grybauskaite was in favor of Mink's isolation during her second presidential term and she also blocked agreements between the EU and NATO and Belarus. Nauseda has said he does not discount the possibility of gradually resuming dialogue with Belarus.

The major disagreement point in bilateral relations is the construction of the Russian gas export pipeline Nord Stream 2 on the bed of the Baltic Sea. The United States, Poland and the Baltic states say the pipeline is aimed at making the EU more dependent on Russia. Germany says the project will bring gas prices down. Nauseda will probably try not to fuel these disagreements.

Nauseda will present Lithuania's aspiration to secure higher payments to Lithuanian farmers from the 2021-2027 EU budget and also the so-called cohesion funds meant for reducing the economic lag of poorer regions. Under the European Commission's proposal, cohesion funding for Lithuania is set to be cut by around a quarter, taking into account the country's economic progress. The budget negotiations will probably be moved to the next year. Germany might try to secure more of Lithuania's support in growing disputes with the United States and also seek Lithuania's commitment to the distribution of migrants within the EU. The two leaders will also probably discuss Brexit's impact on the EU.

During his election campaign, President Nauseda stressed the importance of economic diplomacy. The president had plans to meet with potential German investors but it's been not possible to organize such a meeting due to summer holidays. In Berlin, presidential advisors plan to meet with representatives of Mikron. Several German companies have stepped up their investments in Germany in recent years, with Hella and Continental building productions facilities in the country.

Two plus two is not necessarily four: German policy towards the Visegrád countries

Until 2015, very few people had heard of the term “ Visegrád Group” in Germany , let alone had...

Lithuania and Germany: a relationship that is better than ever before

The Baltics in an era of transatlantic turbulence