BNS
aA
Lithuanian President Gitanas Nauseda wore a military uniform to his meeting with troops on Tuesday, saying that he wanted to be closer to them. 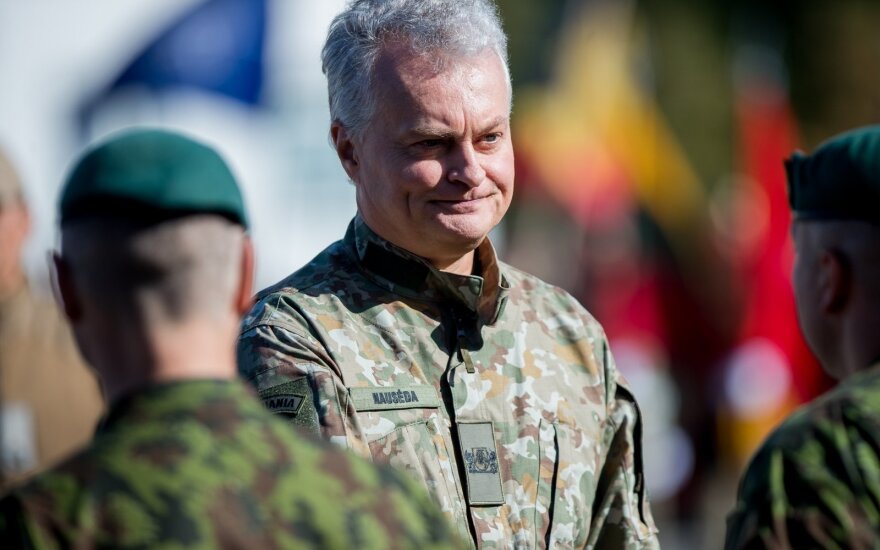 "I want to be together with our troops with all my heart and soul, and if I had come here wearing shiny shoes or a suit and tried getting information by being completely outside the borders of that army, it would have hardly created a good image," the president told journalists in Rukla, central Lithuania on Tuesday.

"I want to be morally, and in all other senses, an integral part of our army as I am, you should not forget that the commander-in-chief of our armed forces," he said.

Nauseda also believes such a decision does not run counter to the principle of the civilian control of the armed forces.

"I like it, and I would even like to go to work like that but I think that would lead to bad associations with some other countries where their leaders walk around wearing army uniforms, just like I walk around as a civilian," the president said.

He said it's the second time he wore a military uniform as "I have tried it once."

Tomas Balkus, the spokesman for the chief of defense, told journalists that the president was issued a uniform just like any other troop, having signed an issuance act. Such rules were in placed during the terms of previous presidents as well, he said.

The Lithuanian president wore a military uniform for his meeting with troops in Rukla.

State leaders wearing army uniforms sometimes spark debates in Western countries, with critics saying that state leaders and politicians should not wear them in line with the democratic principles of the civilian control of military institutions.

As political parties in Lithuania pay more attention to the idea of a welfare state , one can expect...

France to send 300 troops to Lithuania next year

France will next year send around 300 troops to NATO 's multinational battalion stationed in...

A type 212A U-31 submarine escorted by FGS Oste warship of the German Navy will conduct a friendly...

Tensions with Iran almost scuttled a major international training exercise in the Sahel.