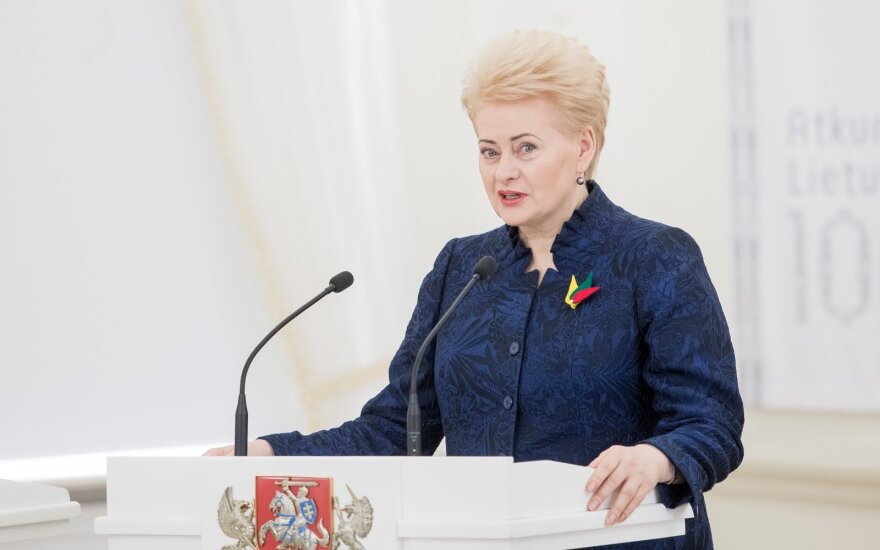 Grybauskaitė's statement came in response to a question about the country's possible response to the poisoning of a former British double spy, an incident the United Kingdom accuses Russia for.

In her words, Lithuania can also add new points to the so-called national Magnitsky list, which currently includes 49 Russian citizens who are banned from coming to Lithuania for corruption, money laundering and human rights violations.

"A broad variety of measures is possible, including expulsion of individual intelligence officers identified by Lithuania, as well as expansion of the national Magnitsky Act," the president told journalists in Brussels.

"I believe that cracking of the intelligence ring in all countries of Europe and destruction of the Russian intelligence network is a common task," she said.

Grybauskaitė said that the expulsion decision would be made shortly.

Former double spy Sergey Skripal and his daughter were poisoned in the United Kingdom in early March. In response to the incident, the United Kingdom expelled 23 Russian diplomats, a move that drew an analogous step on the Russian side.

In 2014, Lithuania expelled Russia's consul general to Klaipėda, Vladimir Malygin, who had been identified by Lithuanian authorities as an employee of the Russian Foreign Intelligence Service.

Lithuanian President Dalia Grybauskaitė says that the European Union and NATO will coordinate...

Some 874 Lithuanian nationals, 1,040 foreigners under intelligence surveillance in 2016

The Lithuanian State Security Department has said that last year it had 874 Lithuanian nationals and...

Lithuania's intelligence on Monday published the identity of a Russian spy operating in the...