BNS
aA
Pope Francis will say a silent prayer in the place of former Vilnius Ghetto 75 years since its liquidation. 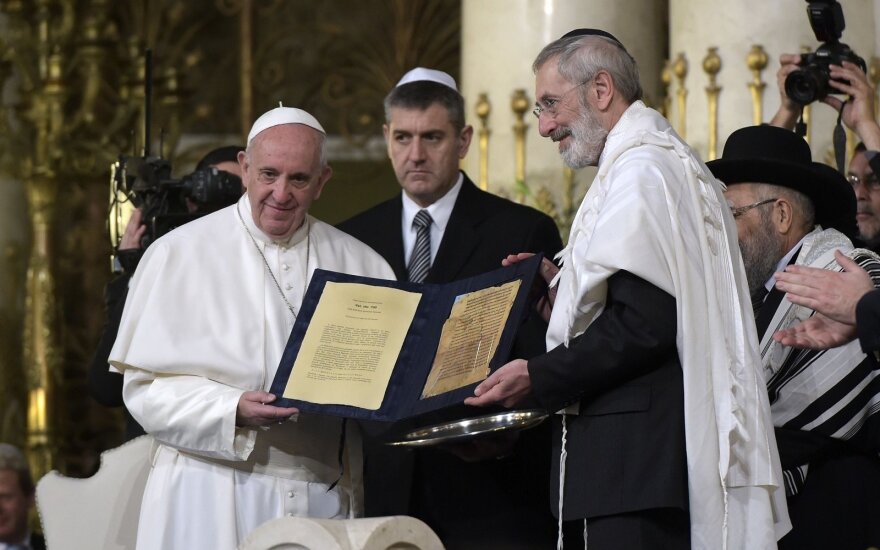 Lithuanian Jews say this gesture is important for both Holocaust survivors and Christians who saved Jews.

"We're glad the pope is sending a message to the world, paying respect to the victims on the 75th anniversary of the ghetto's liquidation. I hope gratitude to Christian Jew savers will also be on his mind," Faina Kukliansky, chair of the Jewish Community of Lithuania, told BNS Lithuania.

"It's a great honor for us that the pope is visiting us, despite the fact that we are of a different religion. We are citizens of this country and we are glad that this visit takes place on the occasion of the country's centenary. He's a very extraordinary pope. He's very democratic and strongly fights against violence," she said.

The pope will honor the memory of the ghetto's victims in Rūdininkai Square in Vilnius on Sunday, Sep. 23. Sunday will mark the exact day in 1943 when the Jewish ghetto was liquidated. Lithuania also marks the Day of Remembrance of the Genocide of Lithuanian Jews on that day.

Around 90 percent of the Jewish population of around 200,000 were killed by German Nazis and their collaborators in Lithuania during the Holocaust.

More than 900 Lithuanians have been awarded as Righteous Among Nations by Israel for rescuing Jews from the Holocaust.

Pope Francis will send an important message to the world from Vilnius when he will pay respect to...

Caritas of Vilnius Archdiocese has launched a campaign to collect donations for flood-ravaged India.

Over 90,000 invitations to meeting with pope in Kaunas issued

Authorities have issued over 90,000 invitations to attend a meeting with Pope Francis in a park in...

Pope Francis ' visit to Lithuania in late September will place the country in the world's spotlight,...

The maximum amount of the state's additional spending on organizing Pope Francis ' visit to Lithuania...

Papal visit to Lithuania: spending arrangements and calls for Church to reveal figures