(1)
BNS
aA
Lithuanian politicians on Monday refused to recognize the decision of Belarus authorities to suspend participation in the European Union’s (EU) Eastern Partnership program, stating that the decision had been made by an illegitimate regime. 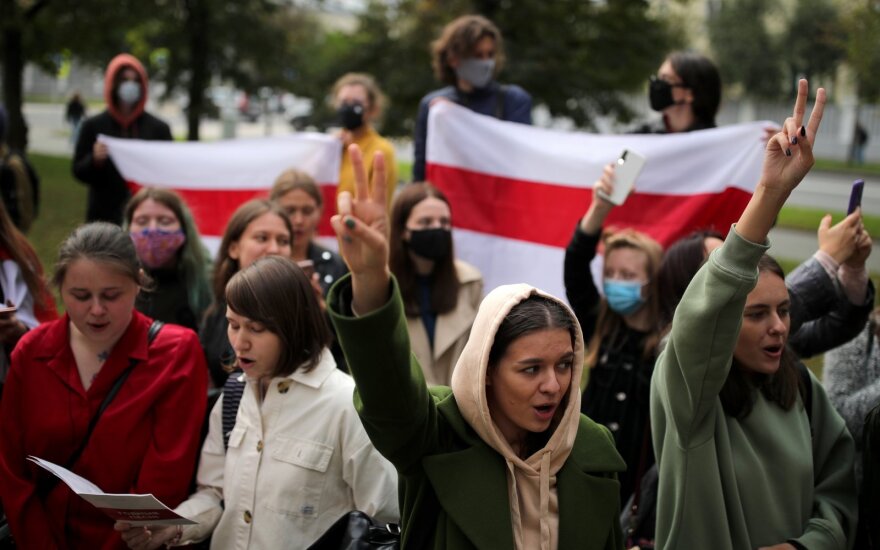 “Illegitimate leaders do not take such decisions. Belarusian people are invited to use the advantages of the Eastern Partnership but it looks like this will only happen after the elections,” Foreign Minister Gabrielius Landsbergis said in comments sent to BNS late on Monday.

“We will call not to recognize any changes to international commitments and sovereignty and revisions adopted by an illegitimate government,” he added.

The decision made by the Minsk regime to suspend participation in the Eastern Partnership, first of all, punished the people of Belarus and the regime isolated itself further, Landsbergis stressed.

“The EU’s proposal of reforms and support to democratic Belarus remains in force,” the Lithuanian foreign minister pointed out.

Meanwhile, President Gitanas Nauseda said that the Minsk regime had trampled on the right of the Belarusian people to build their future themselves by deciding to suspend participation in the EU Eastern Partnership.

“The regime, which has shown its total disrespect for the right of Belarusian people to elect its government, continues to trample on the right of one of the European nations to build its future by itself. The Kremlin uses the hands of this regime in an attempt to maintain its diminishing “sphere of influence”. We know perfectly well that anyone acting against the freedom of nations is doomed to lose. I am certain that the Belarusian nation will soon be able to take its destiny in its own hands,” he said on Monday in comments sent to BNS by the presidential communication group.

According to Nauseda, Alexander Lukashenko, who has fully pinned his hopes of political survival on the Kremlin, can no longer be considered an independent political figure and he no longer has even a small chance to make sovereign decisions.

Zygimantas Pavilionis, chairman of the parliamentary Committee on Foreign Affairs, dismissed this decision by the Minsk regime as “a yet another illegitimate propaganda decision made by an illegitimate dictator”.

“Lukashenko has been trying ostentatiously to reject all those possibilities and apparently to point in the sole direction of a union with Russia that would mean a total loss of sovereignty for Belarus, which is illegal as the Belarusian nation has not given him such a mandate,” the MP told BNS.

According to him, the decision on the Eastern Partnership made by Lukashenko’s regime was not underpinned by the mandate given by the nation given the increasing number of Belarusians who approved of the EU and wanted more freedoms, as shown by polls conducted by independent experts.

“The [Belarusian] nation wants the alternatives, which are enjoyed already by the neighboring nations. Belarus has all the potential to go down that road but for the obstacles posed by the current dictatorship. However, the Belarusians will use all those possibilities during the elections, I am sure,” Pavilionis said.

Belarus said Monday it was suspending its participation in the Eastern Partnership, an initiative to boost ties between the EU and its ex-Soviet neighbors, after Brussels imposed new sanctions over the forced landing of a European flight and human rights violations.

CEO: Lithuanian Railways can lose around EUR 19 mln annually due to sanctions (1)

As the European Union is set to ban exports of potassium fertilizers from Belarus via the Lithuanian...

Lithuania’s Seimas on Wednesday started debating a bill under which Vytautas Landsbergis,...

Visits to Ankara and Baghdad being arranged to tackle illegal migration

Political and expert visits to the capitals of Turkey and Iraq are being arranged at present as part...