BNS
aA
A group of Lithuanian MPs and MEPs have on Wednesday called for imposing EU sanctions on representatives of the Belarusian government, responsible for the ongoing repressions against the opposition and media in the run-up to the upcoming the presidential election. 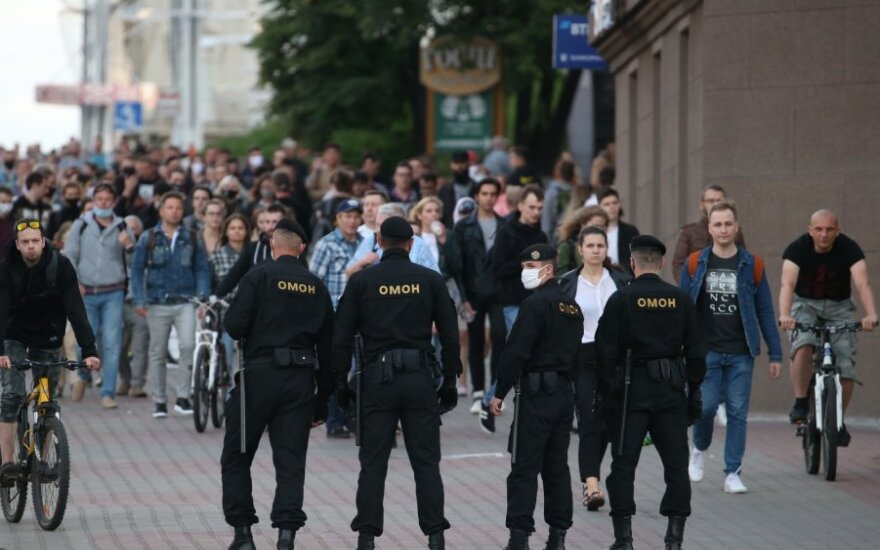 The letter has been signed by Gediminas Kirkilas and Juozas Bernatonis, chairs of the Lithuanian parliamentary Committees on European and Foreign Affairs, opposition leader Gabrielius Landsbergis, Viktorija Cmilyte-Nielsen, leader of the Liberal Movement, and several other Lithuanian MPs and MEPs.

"There is an urgent need to demonstrate a clear position of the whole EU that the brutal actions by the authoritarian Lukashenko’s regime cannot be tolerated," the letter to the leaders of EU institutions reads.

"Therefore, we call for renewing of sanctions against regime and those responsible for the repressions against Belarusian people, for the actions undermining the democratic nature of elections and for the interfering into the democratic and competitive political process, including the participation in the electoral fraud – for the violation of principles and values that are at the very heart of European Union," the letter reads.

The initiator of this address, Landsbergis, leader of the opposition conservative Homeland Union – Lithuanian Christian Democrats, says „staying silent would amount to aiding and abetting“, when "democracy is being brutally trampled in the vicinity" of the EU and "political opponents are being persecuted and innocent people are being detained".

"We cannot close our eyes and cajole dictators as this ostrich policy would lead not only to moral capitulation of Europe but also to the betrayal of thousands of Belarusians taking to the streets to protest and demand democratic changes. Therefore, we, Lithuanian politicians from a wide spectrum of political powers and ideologies, are calling on the EU leadership to impose sanctions on the Belarusian regime for violations of democratic and human rights and freedoms," Landsbergis told BNS.

Last week, Lithuania's Ministry of Foreign Affairs expressed its deep concern over the Belarusian authorities' actions during the election campaign, stating that "ccontinued political repressions and a possible increase in the number of new political prisoners will influence further relations between the European Union and Belarus".

On 3 July, the Ministry of Foreign Affairs of Lithuania handed over a verbal note to the Embassy of...

Lithuania protests attempt by Russia to rehabilitate the Molotov-Ribbentrop pact

On June 18 a representative of the Embassy of the Russian Federation was summoned to the Ministry...

Lithuania's government is set to decide on Wednesday on whether to require that mobile network...