Political scientists: Biden's victory would be more favorable to Lithuania

(1)
BNS
aA
Democratic candidate Joe Biden's victory in the US presidential election would be more favorable to Lithuania, political scientists have told BNS, adding, however, that it's too soon to speak about any potential winner. 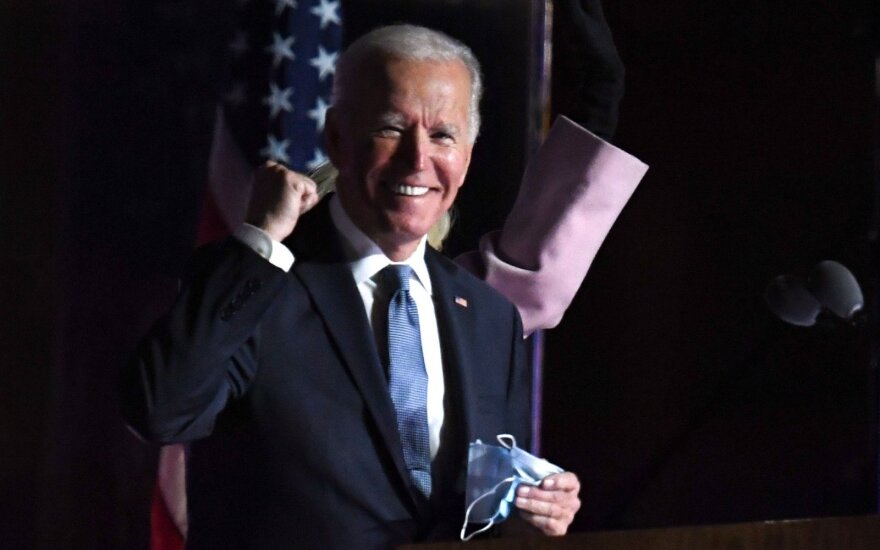 "Biden says he would seek to bring back confidence, strengthen the alliances the United States is involved in, and that's undoubtedly important for Lithuania. In terms of attention to our region, Biden seems like a better candidates who can cooperate with Lithuania and other European countries more," Professor Ramunas Vilpisauskas of the Institute of International Relations and Political Science at Vilnius University told BNS on Wednesday morning.

Related articles
Lithuanians favor Biden over Trump  (4)
How far should the U.S. go to counter China?

Gerda Jakstaite, a political scientist from Vytautas Magnus University believes Biden would be a more stable and more predictable president.

"Judging from the declared ideas, there are really good things for Lithuania, including expressed support to NATO, the ideas on the need to maintain and mend ties with allies, the support for anti-Russia sanctions, that resonate very much with Lithuania's foreign policy ideas," she said.

Nevertheless, Vilpisauskas paid attention to the fact that Lithuania has also seen many favorable decisions made during Republican Donald Trump's first presidential term, like the deployment of US troops. But he also added: "Trump is not that candidate many allies in Europe and NATO would expect".

Jakstaite notes that the Republican Party's ideas are close to Lithuania's foreign policy goals, including increased defense spending and a tough stance on Russia. "In Trump's case, if he's reelected, there's always a high chance of surprises," she said.

The political scientists say the initial election results show the race is tighter then it could have been expected.

"The main thing that can be said right now is that the election race is tighter than it could been expected, judging from public polls, and the situation in those swing states that can determine the outcome of the presidential election vote remains unclear," Vilpisauskas said.

"The fact that Biden is ahead in general is not surprising but that lead over Trump is not that big to allow us to speak about Biden's victory," he said.

Jakstaite also paid attention to the fact that the existing situation is different from what the initial public polls showed when they predicted Biden's victory. "Up to the election, polls showed Biden was likely to win, but now, when they started counting votes, that lead is going down significantly," she said.

"The process will definitely take time and we can hardly expect to find out who won today," the VDU political scientist said.

In Vilpisauskas' opinion, irrespective of who wins the election, internal issues, like racial inequality, the pandemic and economic problems, will dominate the presidential agenda.

"And that division we see now and which is confirmed by the election results will remain very significant and it will have impact on the US participation in the resolution of global issues that are also important for Lithuania," he said.

"We can see that both candidates have very strongly mobilized their supporters and also opponent. It might be so that quite a number of people voted against one of the two candidates," the political scientist said.

The latest data shows Biden has won 223 electors' votes and Trump has won 214.

More Lithuanians would prefer Joe Biden over Donald Trump as the next US president, an opinion...

How far should the U.S. go to counter China?

From Pacific bases to the Himalayas, Washington and Beijing are facing off.

America is about to enter its years of lead

Trump’s calls for political violence are a familiar far-right strategy.

Many thought 2016 was a fluke. That’s impossible to argue now.

Russian troops in Nagorno-Karabakh ‘clearly a win for Moscow’

Nagorno-Karabakh—The Russian soldiers were in no mood to talk. At the bottom of a winding mountain...

The Lithuanian Central Electoral Commission on Thursday did not granted Antanas Guoga's request to...