BNS
aA
The Lithuanian parliament voted on Tuesday to give a renewed mandate to Prime Minister Saulius Skvernelis' reshuffled Cabinet. 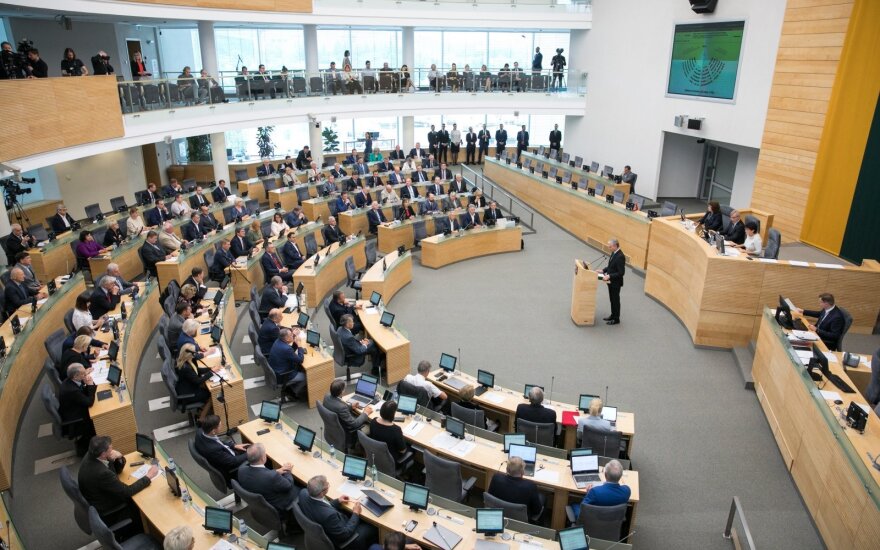 The motion was passed in a vote of 75 to 27 with nine abstentions.

The Cabinet's powers were renewed with the votes of MPs from the ruling coalition. Opposition lawmakers question the constitutionality of the procedure and plan to turn to the Constitutional Court.

"The government can and must continue the work it has started because not of the planned good projects have been completed," MP Stasys Tumenas of the Lithuanian Farmers and Greens Union, the biggest party in the Seimas, told the parliament.

Opposition MPs did not approve of giving a renewed mandate to the Cabinet, saying that with just over a year left until the next general election, the government has too little time to do something important.

"The goal of the government is to stay on until the end of this term. The Liberal Movement does not support this; so we will not vote in favor," said Viktorija Cmilyte-Nielsen, head of Liberal Movement's political group in the parliament and the Seimas opposition leader.

"I don't think we can expect anything from this government," said Julius Sabatauskas, head of the opposition Lithuanian Social Democratic Party's group in the Seimas.

"Regrettably, the prime minister did not take the opportunity (...) to demand both high professionalism and competence from candidates," he said.

The Cabinet's powers were renewed in a single vote based on an article of the Seimas Statute that allows the procedure if the government's program is not amended.

Opposition MPs say, however, that the article may run counter to the Constitution which requires a vote on the government's program to give it powers.

MP Razma has confirmed that they plan to ask for the Constitutional Court's opinion on the issue.

The procedure of approving the government's program in the parliament would take longer than holding a single vote on renewing its powers.

Skvernelis' Cabinet needed a renewed mandate from the parliament because half of its ministers have been replaced since it was appointed after the 2016 general election.

The Cabinet was reshuffled in line with the Farmers and Greens Union's new coalition agreement with the Social Democratic Labor Party, the Order and Justice Party, and the Electoral Action of Poles in Lithuania–Christian Families Alliance (EAPL-CFA).