...
BNS
aA
A draft resolution has been registered in the Lithuanian parliament, calling for illegal migration to be deemed hybrid aggression. It also proposes to consider launching consultations within NATO. 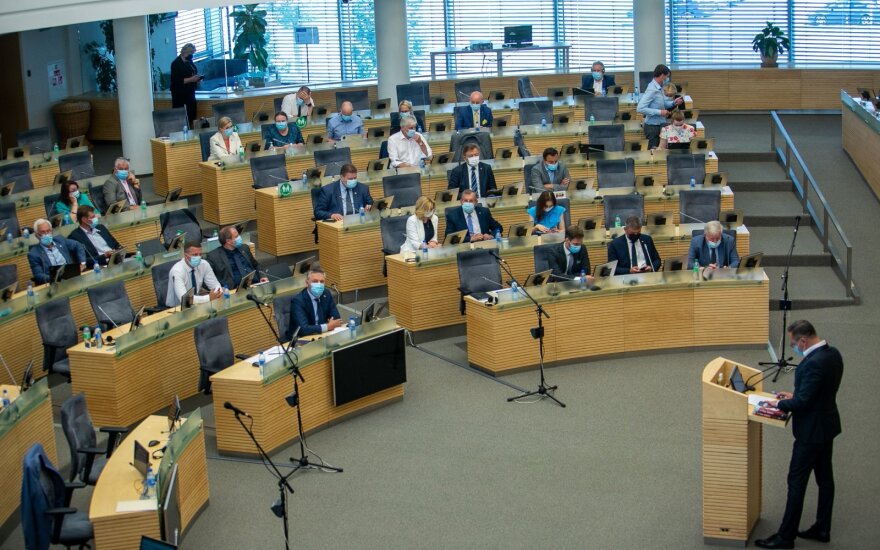 According to the ruling conservative Homeland Union – Lithuanian Christian Democrats, the bill is being proposed by the ruling majority in the parliament in cooperation with leaders of the majority of opposition groups.

"In recent weeks, we have seen the government's widespread effort to fight hybrid aggression. Therefore, demonstrating unity between the position and the opposition in the face of threat, the Seimas will issue this position on the recognition of hybrid aggression," Laurynas Kasciunas, chairman of the parliamentary Committee on National Security and Defense, was quoted as saying in a statement.

"I believe we can definitely state that the Minsk regime is contributing to illegal migrations via Belarus. This hybrid aggression can be further developed and can even be used as a basis for threats of new nature in the context of the large-scale military exercise Zapad, therefore, we are taking this seriously and are proposing deterrence measures with the government," he said.

The draft resolution states that "countries hostile towards Lithuania are carrying out hybrid aggression against the Republic of Lithuania" by organizing the flow of third-country foreigners illegally crossing Lithuania's border, thus, posing threat to Lithuania's constitutional order and public peace.

Therefore, the resolution calls on the government to step up the protection and defense of the state border between Lithuania and Belarus through the involvement of the Lithuanian army and the construction of a physical defense barrier alongside the whole border as soon as possible.

The document also calls for measures to ensure that the organizers of illegal migrations, including natural and legal persons in Belarus, are held accountable and placed under national and EU sanctions.

If hybrid aggression continues and intensifies, upon the assessment of the degree of this hazard, the draft resolution calls for the launch of consultations with NATO member countries, first of all, the United States, over threat to the country's territorial integrity, political independence or security.

The Lithuanian parliament also stands ready to propose turning to EU member states, the European Commission and other institutions and invite them to express solidarity and provide necessary assistance to Lithuania to withstand hybrid aggression.

A total of 1,676 foreigners have been detained near Lithuania's border with Belarus so far this year, up more than 20 times from last year.

Turkey could help identify migrants crossing into Lithuania from Belarus illegally as a significant...