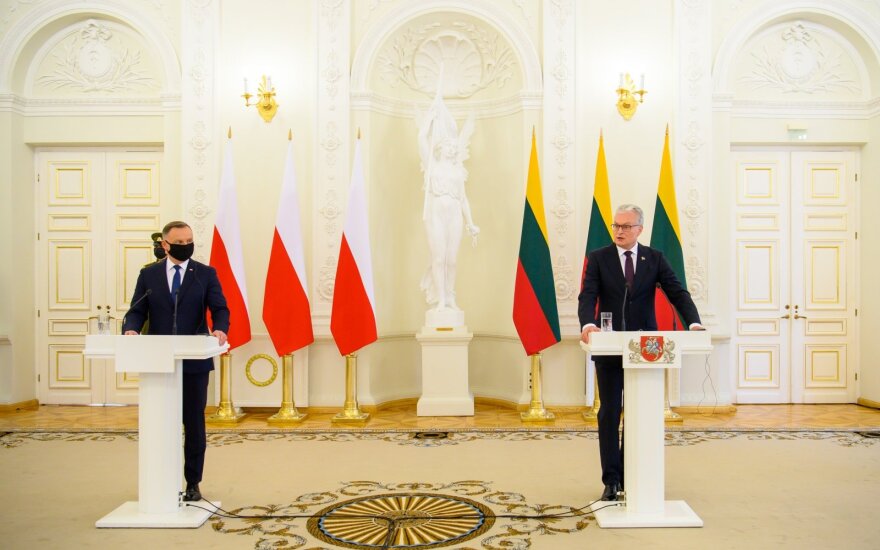 "The Lukashenko regime is becoming increasingly aggressive, posing threat to the security of the whole of Europe. (…) We must provide comprehensive assistance to people who have fallen victim to the regime, members of civic society and the media. We are aware today of the fact that the number of political prisoners in this country continues to grow and is reaching just shocking levels," Nauseda told a joint press conference with his visiting Polish counterpart in Vilnius on Tuesday.

The Lithuanian president pointed out that "the Belarusian regime's hybrid attack" has shown the need to step up the protection of the European Union's external border, to boost resilience "to attacks of this nature in the future".

In his words, the ongoing migration crisis has revealed the EU's legal loopholes "we need to fix" by adapting EU law to the "new reality" and blocking the way for illegal border crossings and "the non-democratic regime's abuse of the asylum system".

Nauseda vows to raise these issues at the upcoming European Council meeting later this week.

Meanwhile, Duda underlined that the goal of both Lithuania and Poland is to meet the commitments of protecting the external border, made when the countries joined the Schengen Area.

He also called on the EU to jointly impose sanctions for Belarus for illegal migrations.

"Since we see this as an organized action involving Lithuania, Poland and Latvia, we expect solidarity and for the European Council to make a certain decision on sanctions for the Lukashenko regime," Duda said.

"I am convinced we will cope with these difficulties but the Belarusian crisis issue still needs the European Union's support," he added.

The Polish president says he was assured by Frank Walter Steinmeier on Monday there're no plans at the moment to resume border controls on the Polish-German border despite emerging reports. He did not rule out, however, that German officers would assist their Polish counterparts on the Polish-Belarusian border. Nevertheless, the president sees a greater need for "political support and political-economic deterrence".

According to Nauseda, Lithuania "is trying to take the humanitarian factor into account" amid migrant push-backs, and is accepting socially-vulnerable migrants, women with children, and is also trying to provide adequate living conditions for migrants.

"We cannot allow brutal violation of our borders, irrespective of any context, as that would mean we would succumb to the ongoing hybrid attack against us. And this is what this regime hopes for: that we will do nothing, and just be passively watching and will soon have a problem we won’t be able to resolve on our own," he said.

"We, the three countries, have found ourselves at the front line and w must act to ensure that the European Union's external border is protected," the Lithuanian president said.

Lithuania, Latvia and Poland have been facing a major influx of illegal migrants entering from Belarus. Almost 4,200 illegal migrants, mainly Iraqis, have entered Lithuania alone so far this year.

Both Lithuania and the EU accuse the Belarusian regime of orchestrating the flow of migrants, calling it a hybrid attack in retaliation for the block's sanctions for Mink's crackdown on the country's opposition.

Lithuania is providing explanations to the EU border agency Frontex over its recorded several dozen...

Nauseda meets Biden in Glasgow gets assurance on China