BNS
aA
Lithuanian President Gitanas Nauseda plans to seek allied support over the threat posed by Russia at the NATO summit in London but disagreements among the American, French and Turkish leaders might undermine solidarity. 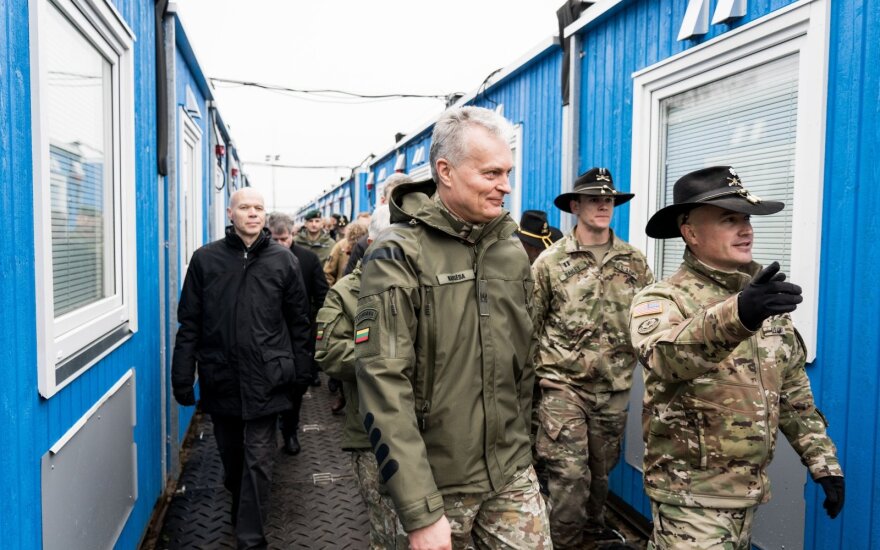 On Wednesday, Nauseda will attend a working session of NATO leaders and also exclusive lunch hosted by the US President Donald Trump for countries spending at least 2 percent of their GDP on defense.

Diplomatic sources say the Lithuanian president and his Latvian, Estonian and Polish counterparts also plan to have a separate meeting with Turkish President Recep Tayyip Erdogan to convince him not to block the updated defense plan for the Baltics and Poland.

Turkey is the only NATO ally refusing to back the NATO defense plan for the Baltic states and Poland until it is agreed on a similar plan for Turkey. Turkey demands that Kurdish fighters in northern Syria be labeled as terrorist groups, despite them being appreciated in the West for their contribution to fighting the Islamic State.

Alexander Vershbow, a former NATO deputy secretary-general and now an expert at the Atlantic Council think-tank, says the Turkish veto is doing major political damage and is undermining the Alliance's solidarity.

"The Turkish veto is unfortunate more from a political point of view than a military point of view. There are existing plans and these updated plans are already there on the shelves if there is a crisis tonight," Vershbow told BNS in London.

"But it's not a good thing to take hostage plans that have to do with Article 5. It weakens solidarity in the Alliance," he added, mentioning the NATO Treaty provision on collective defense.

It had been planned that leaders of the Alliance's member countries would celebrate NATO's 70 establishment anniversary without any tensions but disputes between Turkey and Western countries as well as the French president's statements on NATO problems and ties with Russia played havoc.

French President Emmanuel Macron said before the summit that NATO was experiencing "brain death", with US President Donald Trump calling that "nasty".

The French leader also suggested that the Alliance should focus on fighting terrorism, instead of focusing on Russia's threat, expressing his wish for strategic dialogue with Moscow.

Nauseda, just like other Central European leaders, are against, with the Lithuanian president stating that Moscow is the biggest threat to the existing world order.

"It's very important to identify Russia as a threat," the Lithuanian president told BNS in London. The way Russia should be treated might be one of the key topics during the leaders' working session.

Following the NATO session, Nauseda and eight other leaders are scheduled to gather for a "2 percent club" meeting at the initiative of Trump. 2 percent GDP is a NATO-agreed legally non-binding but politically important rate.

The Lithuanian president said he would view the lunch "as motivation for other countries to make more progress and also (…) fulfill their obligations".

Nauseda plans to attract Trump's attention to the way Lithuania is taking care of its defense and making military purchases from the United States. Lithuania has recently decided to buy 200 Oshkosh JLTVs for 145 million euros. And the Baltic country also plans to spend a similar amount on six American Black Hawk helicopters.

"We realize very well where our priorities are. We have done our homework and we can now be glad. The key thing is that we are making the investment into the absolutely necessary things for us as we are replacing the military structure that remains from the Soviet times and it will be soon replaced 100 percent," Nauseda said.

"We are doing this to acquire modern equipment and acquire it from our best partners – the United States, Germany etc.," the Lithuanian president added.

The Lithuanian Ambassador to Turkey was summoned to the country's Ministry of Foreign Affairs for...

Lithuanian President Gitanas Nauseda arrived in London on Monday evening for a NATO summit that...

Nauseda and Trump discuss Lithuania's military purchases from US

Lithuanian President Gitanas Nauseda and US President Donald Trump discussed in London on...