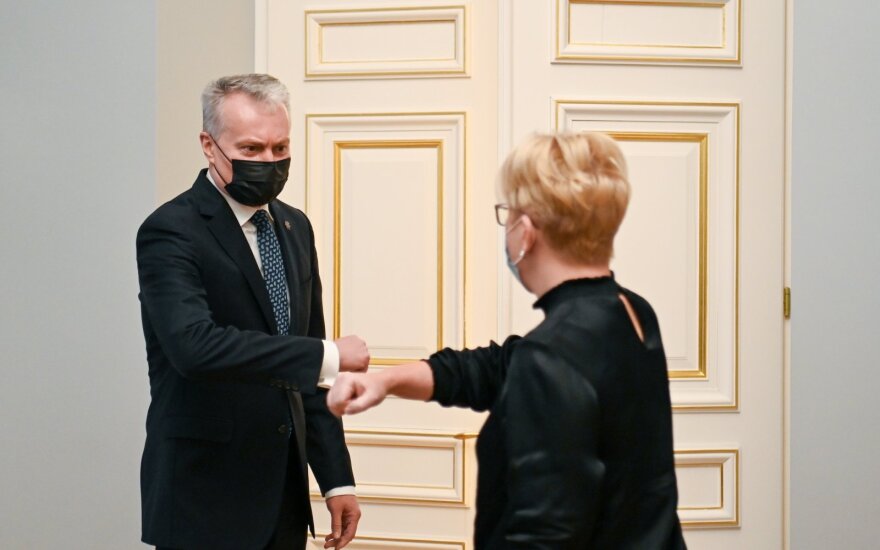 "I can say that other candidates should be proposed for two of the ministerial positions – transport and agriculture," he told a news conference on Friday.

"I do not mean to say that the candidates who presented themselves were bad or did not understand their functions. What I can say today is that I, as the president, cannot take responsibility for their short- and long-term goals because of a lack of vision, a lack of good knowledge of the main problems in the respective sector," the president said.

Nauseda also said that the Freedom Party has a new candidate for transport minister who "seems to be a good candidate" for the portfolio.

The president noted that he had "certain doubts" about Arunas Dulkys, a former auditor general proposed for health minister, but Prime Minister-designate Ingrida Simonyte vouched for him.

"What made me doubt the most was not (Dulkys') long-term vision and plans to optimize the health system, but his immediate actions, because we are talking about a sector that is currently under great stress," Nauseda said.

"However, Simonyte assumed personal responsibility for the minister's activities, and we agreed that if he does not perform well, we will not wait for long to make decisions," he added.

Nauseda said Dainius Kreivys, a conservative MP proposed for energy minister, was the other candidate he has doubts about, but the aspirant promised to do his best to avoid potential conflicts of interest.

"Kreivys is an expert in his field, but his involvement in certain business structures and his earlier experience as a minister and his subsequent resignation pose certain risks that neither the president nor the prime minister can ignore," the president said.

Nauseda confirmed that Kreivys had made "a written commitment and suggestion how he could avoid the slightest suspicion of a conflict of interest".

"Seeing that (Kreivys) takes these risks very seriously, I see no reason not to approve him for the position of energy minister," he added.

Kreivys was forced to step down back in 2011 amid accusations that he had breached conflict of interest rules by signing a document allocating EU funding to a company partially owned by his mother. He claimed that he had not known that his mother's company was among the winning bidders.

Nauseda confirmed that he is planning to meet with candidates for the ministerial posts that are yet to be filled on Monday and to sign a decree to appoint the government on Tuesday morning at the latest.

The president concluded meetings with all 14 ministerial candidates on Thursday.

Simonyte was designated as prime minister on November 25. She was given up to 15 days to form her Cabinet and have it endorsed by the president and then present the government and its program to the parliament for approval.

The priorities of Lithuanian President Gitanas Nauseda and Arvydas Anusauskas , candidate for the...

Spokesman: President has doubts about some Cabinet candidates

Lithuanian President Gitanas Nauseda has doubts about some of the center-right coalition 's...

Lithuanian President Gitanas Nauseda said on Monday he has signed a decree to approve the makeup of...