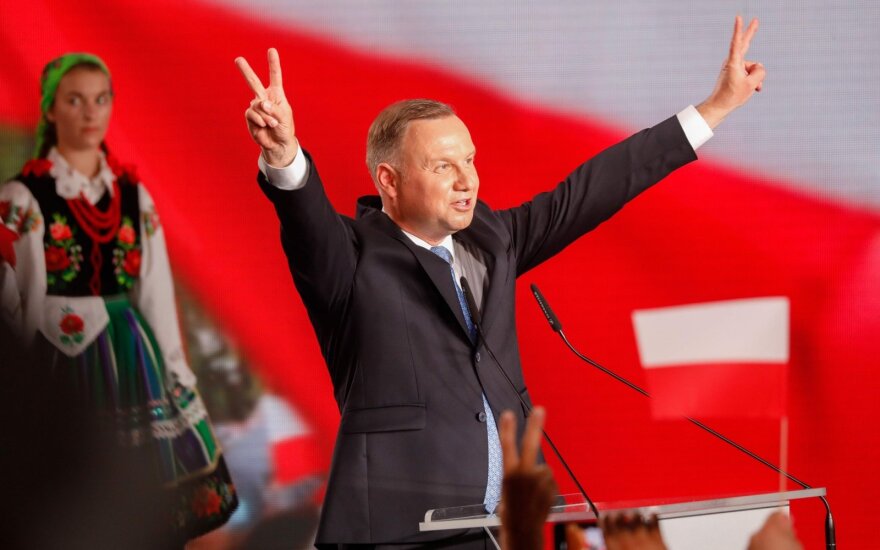 Lithuanian President Gitanas Nauseda on Monday congratulated Polish President Andrzej Duda on his re-election for a second term, emphasizing the importance of bilateral cooperation in defense and infrastructure projects.

"Congratulations to my friend Andrzej Duda on winning the Polish presidential election for the second term!," Nauseda tweeted.

"I wish you strength and success. Looking forward to continuing close cooperation in security, defense and implementing regional infrastructure projects."

Nauseda told reporters later on Monday that Duda's re-election meant that good dynamics of bilateral neighborly relations would be maintained.

"In the past year, I've worked really intensively with the Polish president and, of course, with the prime minister," the Lithuanian president said, commenting on the outcome of Poland's presidential election.

"What's very important is that we find agreement on many issues", including on infrastructure projects and economic relations, he said.

According to Nauseda, it is not correct to assume that Duda is more focused on cooperation with the United States than the European Union.

"One shouldn't try to paint a black-and-white picture, because Poland actually wants to cooperate with the United States and is an active member of the EU, too," he said.

After a strained period, Lithuanian-Polish relations have become close and intensive again in the past few years. Nauseda chose Poland for his first foreign visit after his inauguration last year.

A major breakthrough in ties between Vilnius and Warsaw came in 2017 with the signing of a deal between the state railway company Lietuvos Gelezinkeliai (Lithuanian Railways) and Poland's Orlen, the owner of the Mazeikiai crude refinery.

Warsaw also seeks support from Vilnius in its row with the European Union over its controversial judicial reform. Some observers say that bilateral ties benefit from the Polish government’s ambition to take the role of a regional leader in the Central European region.

Nauseda and Lithuanian Prime Minister Saulius Skvernelis are scheduled to meet with Duda as part of their visit to the neighboring country this week to mark the 610th anniversary of the Battle of Zalgiris (Grunwald).

A large majority of Polish citizens who cast their votes in Vilnius in Poland 's presidential...

Poles in Vilnius back Trzaskowski in Poland's presidential election