BNS
aA
A Lithuanian team of 11 experts and medics has left for Armenia on Friday morning for a two-week mission to help the country to take the coronavirus infection still spreading in the country under control. 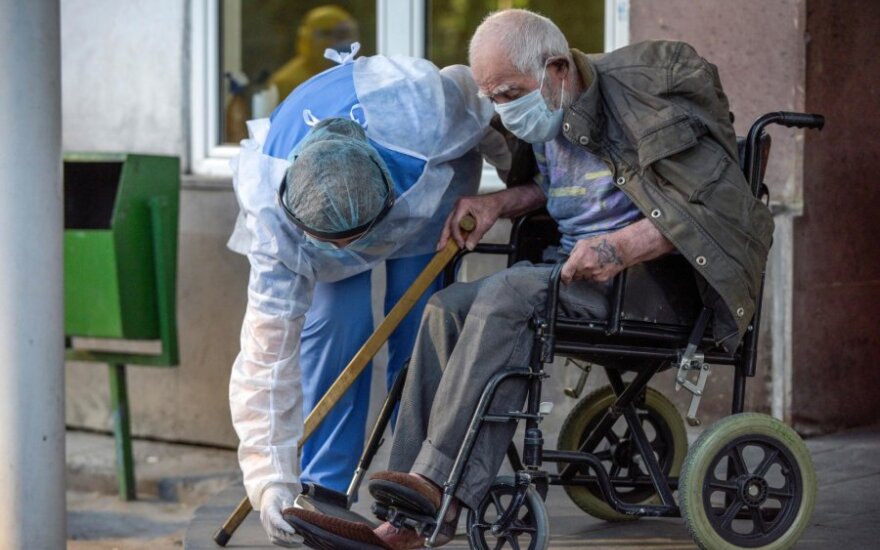 The team includes Marius Ciurlionis, an adviser from the Lithuanian Health Ministry who will led the operations headquarters, military officers from Lithuania's Emergency Operations Center, several medics and nurses.

"Now having a good situation already and being able to breath a bit easier, Lithuania has built a team of medics and headquarters staff who are going to Armenia today to practically help people who are ill there, and to also share our experience we have gained while taking the COVID-19 crisis under control," Lithuanian Health Minister Aurelijus Veryga said during the seeing-off ceremony at the military airbase in Zokniai.

The team includes doctors and nurses from three hospitals, including Santara Clinics, Kaunas Clinics and Panevezys Republican Hospital, as well as a field medic and an army logistics specialist.

„Starting with the medics, I would like to thank them very much as these are volunteers and nobody forced them to take part in this mission and these are people who decided to do that on their own. It's a risky matter really, we do understand that, to fly to a hotspot where the disease is still spreading. There's a risk, a professional risk. (…) And the headquarters staff members are the one who have spent a lot of time at the headquarters, working from the morning till the evening without counting time since the very star of the crisis management. And they have all information on what we have done and how Lithuania has acted, every detail," the minister said.

In his words, Lithuania is also sending 30,000 tests and the medics are taking necessary equipment and personal protection equipment.

Armenian Ambassador to Lithuania Tigran Mkrtchyan thanked for the provided assistance, stressing that Lithuania was the first country to respond to his country's request to send medics and help with the coronavirus as the situation in Armenia remain complicated.

"It's the first humanitarian assistance project of this type in Lithuania's history. It meets Armenia's needs and has been implemented very swiftly. It took a bit more than two weeks from the idea to its implementation. The reaction was very swift and urgent," Rasa Kairiene of Lithuania's Ministry of Foreign Affairs said.

In her words, the Swedish government is also contributing to the funding of this mission.

The plane that is taking the Lithuanian team to Armenia will also bring back 12 people who want to return to Lithuania. Rasa Jakilaitiene, spokeswoman for the Foreign Ministry, told BNS they will include three families permanently residing in Lithuania as well as one businessman who temporarily stayed in Armenia during the pandemic.

The Lithuanian Health Ministry published on Tuesday a list of 45 countries most affected by the...

Lithuania to advise self-isolation for arrivals from corona-affected countries

Arrivals from coronavirus -affected countries will be advised to self-isolate after Lithuania lifts...

On Sunday, 3 new COVID-19 cases were detected in Lithuania. Overall, there have been 1 801 recorded...

Foreign minister to Armenia and Azerbaijan: escalation benefits neither side

Lithuanian Foreign Minister Linas Linkevicius on Friday spoke by phone with his Armenian and...

Lithuania is calling on Armenia and Azerbaijan to seek peaceful resolution of their...