BNS
aA
Over a dozen of people have on Monday staged a protest outside Lithuania's Interior Ministry over plans to house migrants in the town of Dieveniskes in Salcininkai District. 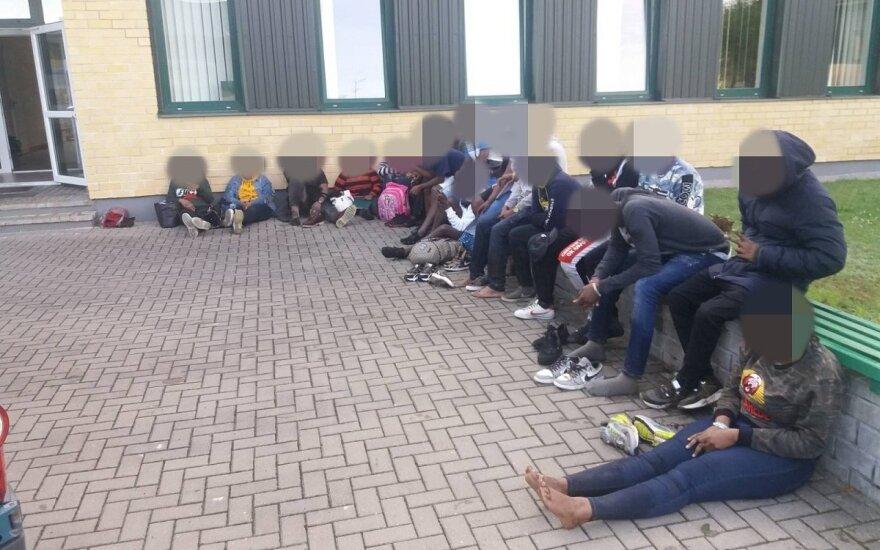 "First of all, we are afraid of the closeness. We do understand that those people need to be accommodated somewhere, taken care of, but it should be done within a safe distance for officers who say they will protect us to have time to respond," Liuba Poliak, 62, from Dieveniskes told journalists.

Local residents say they learnt about plans to accommodate illegal migrants at the local former technology and business schools from media reports. If they fail to agree with the government, local residents plan to turn to court and are already looking for a layer, Poliak said.

Later on, Interior Minister Agne Bilotaite came out to talk to the protesters and said she understands people's concerns, adding, however, there were very few places to choose from to accommodate migrants.

"We asked Turto Bankas (sate enterprise Property Bank – BNS) to suggest places where we could accommodate those people. They provided a list, which was short, and not all premises met the criteria. Those premises were the most suitable for us," she said.

In her words, migrants would be accommodated at the aforementioned school only upon the installation of a fence and possibly CCTV cameras.

"Maximum security will be ensured for your community. Speaking of fences and protection, they will have to be ensured, undoubtedly," the minister said.

Protesters also held pages with the minister's previous words that migrants would not be accommodated close to residential areas. Asked whether she was now renouncing those words, Bilotaite said that "we can hardly find places in Lithuania where there would be no people at all".

The minister also said other accommodation alternatives are being considered, adding that everything will depend on the inflow of illegal migrants. She asked residents for understanding and solidarity as internal divisions would only be beneficial for the Minsk regime.

Over 2,000 illegal migrants have been detained in Lithuania so far this year, having crossed from Belarus, which is over 20 times more than during the whole year of 2020. A state-level emergency is in place in Lithuania amid the recent spike of illegal migration.

Lithuanian officials say the Belarusian regime is behind the recent spike in illegal migration as tensions between Minsk and Vilnius rose after last year's contested presidential election in Belarus.

Foreign minister to Lukashenko: it's not help, it's blackmail (1)