It’s not just about ‘Pride’ for Lithuania’s LGBT community

(1)
Justinas Šuliokas, the Lithuania Tribune
aA
This June, Vilnius is hosting Baltic Pride for the third time, an annual LGBT event that rotates among the three Baltic capitals, and the curious thing about the clamour in the run-up is that, well, there isn't any. 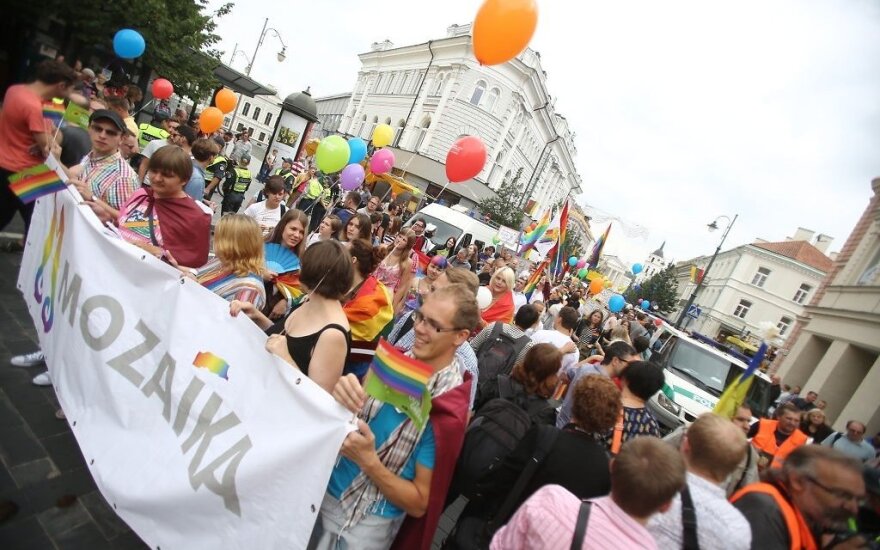 This being the election year and with politicians always eager for coverage, one would have expected that they would use the occasion to trumpet their support for family, traditional values, Christian decency or whatever else they think will resonate with their voters.

Instead, even the usual suspects - the conservatives and Petras Gražulis - seem to have focused their campaigning energies elsewhere. While they may still rediscover the topic as polling day approaches, they may not find anti-LGBT sentiments as fertile ground as it was in 2013 or 2010.

Campaigning against LGBT rights in Lithuania as well as elsewhere in Eastern Europe, is often tied to the more general anti-EU and anti-Western sentiment: "They" are imposing on "us" this depravity which is alien to Lithuanian society and culture.

The "we" and "they" divisions have been dramatically redrawn after Russia re-emerged as an existential threat to Lithuania. And now that the EU and the West are what keep us safe, not railing against - if not genuinely embracing - LGBT rights seems much more acceptable to Lithuanian politicians, especially since "gay propaganda" has been Russia's rallying slogan in its cultural wars with the West.

If there is one thing that the Lithuanian conservatives hate more than gays it is the Russians.

And there has definitely been considerable progress. Before the first Baltic Pride in Vilnius in 2010, organizers had to go to court to assert their right to hold the event at all; in 2013, the issue was the venue, as the-then Mayor of Vilnius, Artūras Zuokas, would not agree to let the LGBT march go along the city's central street. This year, there are no legal battles to fight just the organisation of a peaceful public event.

And yet as an achievement, it sounds a little underwhelming. The current Mayor of Vilnius, liberal Remigijus Šimašius, offers a good case in point.

When asked about Baltic Pride, the mayor used the opportunity to point out how differently his administration treats the event from that of his predecessor and that Vilnius will ensure everyone's right to peaceful assembly. He will himself, however, not join the rally, nor say anything about the essence of the event, the situation of LGBT people in Lithuania.

In fairness, the Liberal Movement is the only party in the country consistently supporting LGBT rights and the mayor is a busy man. But if a group of people want to draw attention to an issue they think is pressing and the leaders of their city and their society only say they support their right to raise the issue - well, that is hardly support at all.

When President Dalia Grybauskaitė was last asked about LGBT rights, her response was essentially that it is not an issue at all. Justice Minister Juozas Bernatonis called demands made by LGBT organizations "propaganda" rather than legitimate concerns. Incidentally, the slogan of this year's pride event is "We Are Not Propaganda".

Six years since the first Baltic Pride in Vilnius, we cannot have the same debate over and over again: whether the LGBT community has the right to raise their issues publicly. They do and let's now discuss what those issues are.

And there are plenty. Homophobic bullying is rampant in Lithuanian schools and there are no government-sponsored programmes to address that, to educate students and teachers alike about LGBT people.

There are no ways for trans people to have the gender they identify with officially recognised. Everyday discrimination, although officially outlawed, is still a big problem, especially outside the more progressive bubble of Vilnius but it does not get even lip service from the political leaders. Finally, there is no legal recognition of same-sex partnership, which gives rise to a whole set of legal problems same-sex couples have to face.

What would make this year's Baltic Pride different from the previous editions is that discussing LGBT rights other than the right to organize a pride would mark a step forward.

The Lithuanian Gay League says that it is “very happy” with the support it has received from...

The Baltic Pride is returning to Vilnius this June. The third LGBT pride event in the Lithuanian...

Conservative MP: Civil partnership law should be put to referendum (1)

Last week, the Lithuanian parliament rejected a bill that would have introduced civil partnership of...

The Lithuanian parliament, Seimas, rejected the bill that would have introduced the institution of...

The Lithuanian Gay League invited swimmer Rūta Meilutytė to march in the Baltic Pride event in...