Milena Andrukaitytė,
BNS
aA
The liberal Lithuanian Freedom Party plans to table an improved draft law on gender-neutral partnership to the parliament in the autumn session after the bill was voted down on Tuesday. 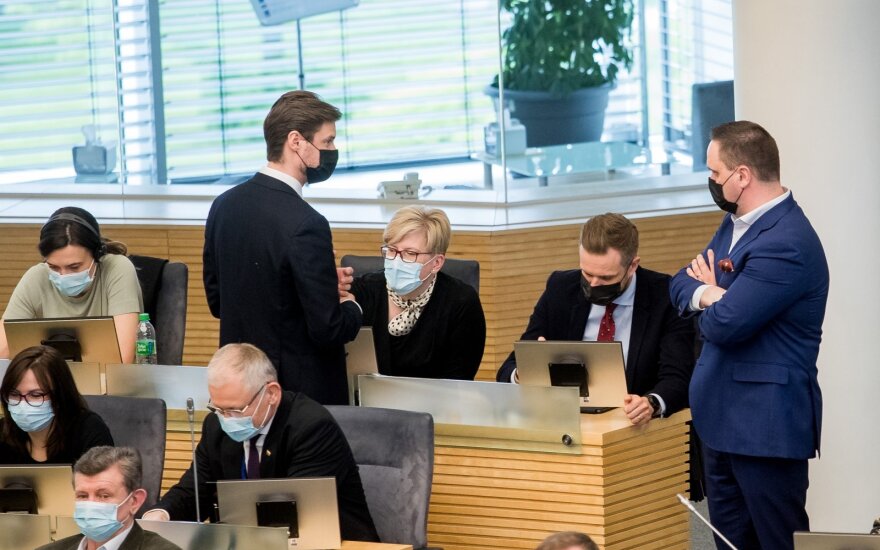 The bill failed to pass the first reading with 63 MPs voting in favor, 58 against and seven abstaining.

Tomas Vytautas Raskevicius, head of the parliamentary Committee on Human Rights, said after the vote that he had no doubt that the bill would make headway in the autumn.

"Never before has there been so much support in the Seimas for these relationships: we have 63 votes, just two votes short [of passing the bill]," Raskevicius told reporters.

"We'll bring the bill back in the autumn session after improving it in line with the Legal Department's proposals and our colleagues' comments," he said.

All members of the Labor Party's parliamentary group and the Regions Group, 12 members of the Homeland Union–Lithuanian Christian Democrats' group, two MPs of the Liberal Movement, five Social Democratic MPs, 21 MPs of the Farmers and Greens Union, and two non-attached MPs voted against the bill.

After the first vote, the parliament passed a motion to send the bill back to its initiators for improvement.

"The fight for human rights is a journey and nobody has promised that it's going to be easy, but I'm very glad that we can have a dignified and constructive discussion, and I'm sure that we're moving forward," Raskevicius said.

However, Ausrine Armonaite, the Freedom Party's leader, said that many compromises had already been made while drafting the bill.

"The mood is gloomy, because in the background of hate and disinformation, the bill failed," the economy and innovation minister told reporters.

"This isn't the end," she added. "We'll continue to strive for change so that all people are equal before the law".

Viktorija Cmilyte-Nielsen, the speaker of the Seimas, presented the bill earlier on Tuesday, urging MPs to support it in the first reading and "take the first step that we have been putting off for 20 years".

Civil partnerships are recognized in 20 EU countries, including traditionally Catholic ones, she noted.

The bill defined civil partnership as "the fact of cohabitation of two persons (partners), registered in accordance with the procedure established by legal acts, for the purpose of establishing and (or) developing, and protecting the relationship of the partners".

Such relationship is based on "a constant emotional attachment, mutual understanding, responsibility, assistance, respect and/or similar relationships and a voluntary commitment to assume certain rights and responsibilities".

If adopted, the new partnership law would come into force on January 1, 2022.

On Tuesday 1 298 new COVID-19 cases were recorded in Lithuania. Since the beginning of the pandemic,...