...
Jon Baldvin Hannibalsson,
www.DELFI.lt
aA
Denmark´s former minister for foreign affairs, Uffe Ellemann Jensen, passed away June 19th, eighty one years of age. His Icelandic colleague, foreign minister(1988-95) Mr. Hannibalsson, published an obituary of his collegue and collaborator, in the Icelandic daily, Morgunbladid. In his article, Mr. Hannibalsson brings back memories of their cooperation during an historical period in world affairs. Here are excerpts from his article: 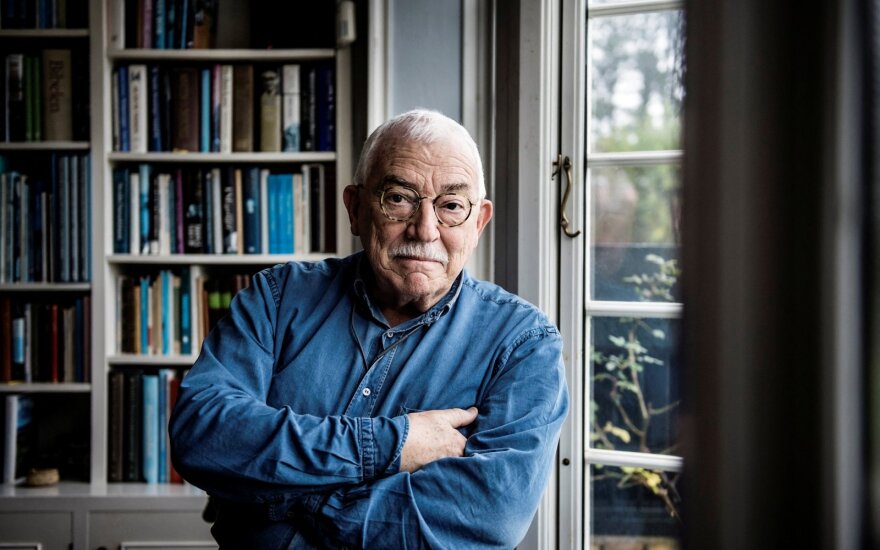 „We were present at the creation of a new era. We were entering a new world and leaving behind half a century of Cold War.

The symbolic Berlin Wall was being torn down. For a hundred million people in Central and Eastern Europe this meant the end of WWII. Germany was reunited peacefully.

The Baltic nations´ exit from the Soviet Union was the beginning of the end of the Russian empire. Major agreements were reached on the withdrawal of occupation forces and reduction in conventional forces. The crowning achievement was decisive reduction of the superpowers´nuclear arsenal, implying a promise of liberation of mankind from the constant threat of total annihilation.

The president of the United States, George H.W. Bush, spoke solemnly of a „New World Order“. Learned scholars even announced the „End of History“. Ahead of us waited a new era of peaceful cooperation during which humanity could enjoy freedom and human rights in society where democracy and the rule of law prevailed.

Now, when we look back thirty years later, we can hardly find the right words to desribe our huge disappointment.

What united us, Uffe Ellemann and myself, during those crucial years (1988-92) was our unfailing support for the Baltic Nations‘ struggle to reclaim their lost independence. All in the name of solidarity of small nations.

Why did it matter? Because the leaders of Western democracy at the time were actually ready to sacrifice those small nations rightful claim to freedom and independence, for the major goal of preserving „peace and stability“. That, to their mind, meant keeping the Soviet Union together at all cost. And to preserve their partnership with Mr. Gorbachev in ending the Cold War.

They seemed not to understand that the Soviet Union was both ideologically and economically bankrupt. Yhey failed to understand that the pioneer of „glasnost and perestroika“, Mr. Gorbachev, had completely forfeited political support domestically due to his failure of implementing the long awaited and promised reforms. It turned out that Western leaders lacked entirely a realistic, long-term strategic thinking on how to react to the dissolution of the Soviet Empire. Instead they reacted to events, too little – too late.

The failure to seize this opportunity to sow the seeds of democracy in Russian soil must be recognized as a failure of leadership of historic proportion.

That´s why we are already now engaged in a new Cold War. That´s why we are now on the verge of the Third World War. And that is why our urgent plans for our global socio-economic sytem for averting an imminent ecological disaster, - are now derailed.

When the attempted coup d‘etat by the KGB and a part of the military in Moscow in August 1991 had failed; and Boris Yeltsin climbed on top of the tank with a clenched fist, declaring victory of the democratic forces, we could no longer close our eyes for the fact that official Western policy on how to react, - was in tatters. „To keep the Soviet Union together in the name of freedom and stability“ had become at best a cruel joke. For a while there was an intense power struggle inside the Kremlin. And in the West, total confusion reigned.

Then, the two of us, took the initiative in recognising the restored independence of the Baltic nations. Our bet that other nations would follow suit, turned out to be right. That was the beginning of the end of the once mighty Soviet Union.

But it is not our fault that the leaders of Western democracy failed to seize the opportunity to give unfailing and consistent support for the democratic forces inside Russia – with the consequences that have now engulfed us in a European war.

Our last tete á tete was in Copenhagen a few years ago. My wife, Bryndís, and I were on our way home from Vilnius and dropped by for a day or two in our old common capital city – Copenhagen. This was just before Christmas. Uffe invited us for a traditional Danish Christmas breakfast down in old Nyhavn. It was an unforgettable rendez-vous. We summed up the past – our failures and our achievements – and quarrelled fiercely about the future. But when I asked him, if Shakespeare´s dictum about „something rotten in the State of Denmark“ still applied, he calmly retorted: „Don‘t you worry! I have already made sure that there are two members with the name of Ellemann Jensen in parliament - in the right places at the the right time“. What followed was an uproarious laughter, still clinging in our ears.