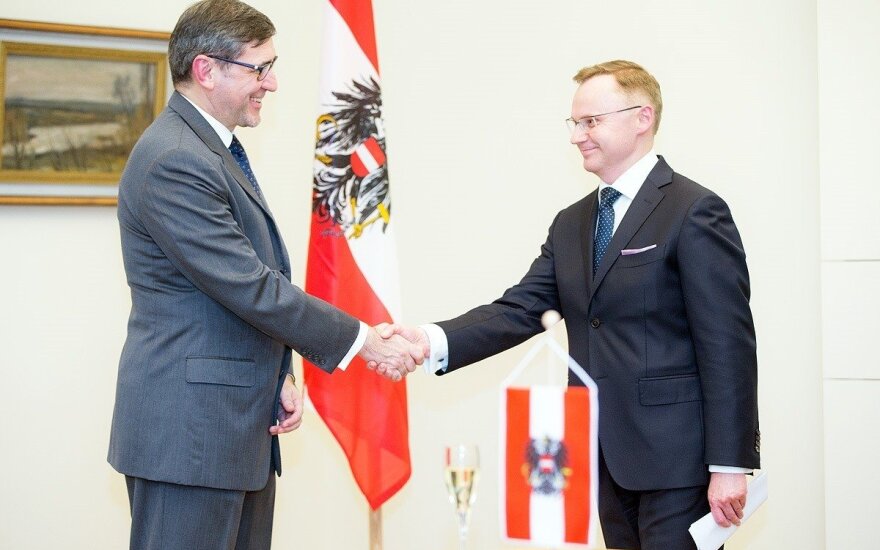 The Lithuania Tribune asked the ambassador for the reasons of nominating Prof. Mizaras as Honorary Consul. This is what the ambassador had to say: ‘Prof. Vytautas Mizaras has been offered this position because of his outstanding qualifications as well as on the basis of very sincere recommendations that I have received from more than one of my personal high-level Lithuanian contacts. Not only is Prof. Mizaras’ legal background very helpful if ever he will have to step in – in consular terms – on behalf of Austrian citizens in Lithuania. He also enjoys a high professional and social standing in this country, as has been illustrated by the fact that he was awarded the Knight’s Cross of the Order of the Lithuanian Grand Duke Gediminas by Her Excellency the President of the Republic of Lithuania in 2015 and that he received the insignia from the hands of the President. I am deeply grateful to Prof. Mizaras – who speaks German – that he has accepted the position of Honorary Consul and to engage in the interest of Austria.‘

Prof. Mizaras has very strong professional and personal links to Austria. Honorary Consul said this to the Lithuania Tribune:‘I would like to emphasize that my personal links to this country are similar to those between Lithuania and Austria. The close bilateral relations between the two counties are a result of an important work that has been done during the years since the Restoration of the Lithuanian independence, where Austria played an important role sharing its democratic values and knowledge as well as its rich cultural and scientific traditions. My personal link to Austria is related to my work as professor in Vilnius University, which cooperates with various universities in Austria. For example, each year the University of Salzburg organizes Summer Law School, where lecturers from Vilnius University are invited to give lectures to the students. As a lawyer, I would like to add that the Austrian law significantly contributed to development of various fields of the Lithuanian law. And finally, I am very fond of the musical tradition of Austria, I love Vienna and the language I am happy to speak.’

New Honorary Consul perfectly aware that a lot of responsibility comes with the title. He said; ‘For me, this title entails huge responsibility and great honor. My biggest wish is to justify the trust and to see the connections between the two countries grow and flourish.’ Hon. Consul Prof. Mizaras added; ‘I accepted the offer having as an objective to contribute to further development of cultural, scientific and economic relationships between Lithuania and Austria as well as spreading the values of Western liberal democracy in Lithuania.’

Austria’s new consular post has been established at the premises of Lithuanian law firm “Valiūnas Ellex” (Jogailos g. 9, Vilnius). It has to be noted that the Honorary Consulate of the Republic of Austria in Vilnius will not issue visas nor passports. Consular information and some consular services for persons in Lithuania are provided by the Consular Department of the Embassy of Austria in Copenhagen (Denmark).

An Austrian Honorary Consulate existed in Vilnius between January 1997 and January 2001, headed by Mr. Valentinas Milaknis. In June 1997 the Embassy of the Republic of Austria was opened in Vilnius.

Austria’s around 300 Honorary Consuls in over 120 countries are individuals that voluntarily engage in the interest of Austria. They provide the staff, premises and resources necessary for their function at their own expense. Austrian Honorary Consulates are the first contact point for Austrians travelling or living abroad in places where no Austrian career representation exists.

After Lithuania had re-gained independence, Austria and Lithuania re-established diplomatic relations on 28 August 1991.

'People know too little about Lithuania and the qualities you have'

Espen Selvik, Honorary Consul of Lithuania in Bergen, talks about his links to the country he...

"Ever since I can remember, my Mother used to tell us where our grandparents and great-grandparents...

'The Lithuanian experience is so important to Ukraine' – Hon Consul

The Lithuania Tribune talks to Vitaliy B. Antonov, Honorary Consul of Lithuania in Lviv, Ukraine .