BNS
aA
Lithuania’s Health Minister Arunas Dulkys plans to choose the vaccine developed by AstraZeneca, when it is his turn to receive a jab, in a bid to quell concerns about this vaccine’s safety. 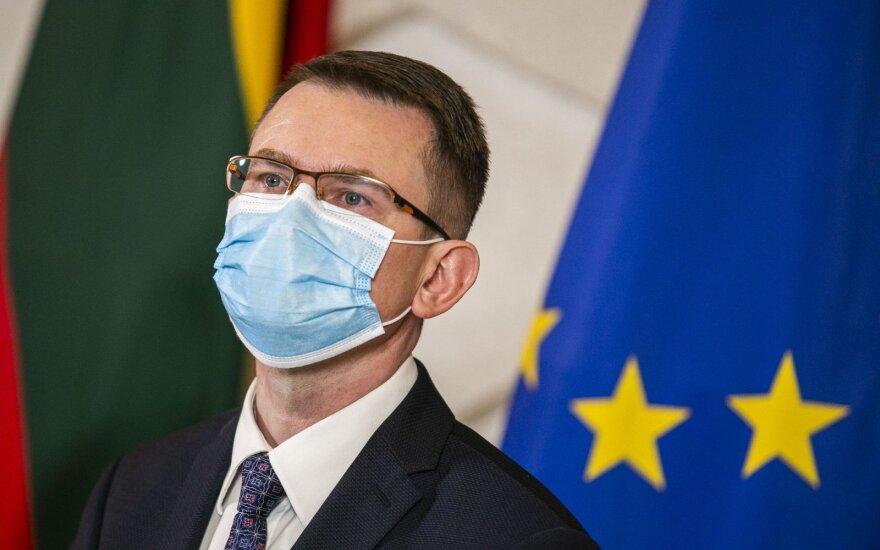 He also confirmed to MPs on Tuesday that policymakers were likely to receive vaccine jabs in the second quarter when larger batches of vaccines would be delivered to the country.

“Personally, I will choose AstraZeneca’s vaccine and not some other vaccine as I want to dispel concerns. It is not that simple with AstraZeneca: despite many news spreading on an international scale, at this particular moment, this hour, I definitely do not have any information that would allow me, as the minister of health, to suspend the process of vaccination with this vaccine,” Dulkys said during a Seimas sitting on Tuesday.

“There are no proofs or evidence [of negative side effects] but there is a lot of emotion, anxiety, it’s kind of a snowball effect… If we receive information that is important for Lithuania’s people or if we are informed that it is necessary to suspend vaccination or the use of a certain batch, we will do that as there have already been cases when we suspended the use of respective batches of Pfizer’s vaccine as well as respective batches of AstraZeneca’s vaccine. We will act in a transparent manner but it would be irresponsible to suspend vaccination today purely for political reasons,” the minister said.

Asked whether the Cabinet members and MPs should be given priority in vaccination so that they could attend meetings physically, Dulkys said that policymakers would receive jabs after the start of mass vaccination.

“As far as policymakers and other prominent figures are concerned, there have not been any special discussions about their vaccination. Vaccine quantities available were too small and the situation in our certain cohorts was, indeed, critical, hence we thought that it is more important to allocate those small vaccine quantities for those vulnerable groups. However, if … we get large quantities of vaccines delivered to our country in the second quarter, I think we will definitely invite policymakers, executives and other prominent figures to receive a jab and to set a good example,” Dulkys said.

Several EU member states, including Latvia, have temporarily suspended vaccination with the AstraZeneca vaccine due to possible formation of blood clots.

The European Medicines Agency will on Thursday hold a special meeting on this vaccine.

Meanwhile, the World Health Organization (WHO) has called on countries to continue using this vaccine, saying that its experts will look into the AstraZeneca vaccine's safety on Tuesday.

Health Ministry: no plans to suspend vaccination with AstraZeneca vaccine

Lithuania has no plans to temporarily suspend vaccination with the AstraZeneca vaccine, despite the...

Minister: almost 17 pct of Lithuanians have immunity to COVID-19

Almost 17 percent of the Lithuanian population already have immunity to COVID-19, Health Minister...

29 Lithuanian athletes, their coaches and medics getting ready for the Tokyo Olympics and Paralympics...

Lithuanian authorities mull offering AstraZeneca jabs to all willing persons without following the...

Minister: people will be allowed to freely decide on AstraZeneca jab

Lithuania will change its COVID-19 vaccination procedure and people will be free to decide whether...