BNS
aA
Lithuanian President Gitanas Nauseda says he has received assurances from Germany's leaders that sanctions against Russia will remain in place until Moscow stops its aggressive behavior in Ukraine. 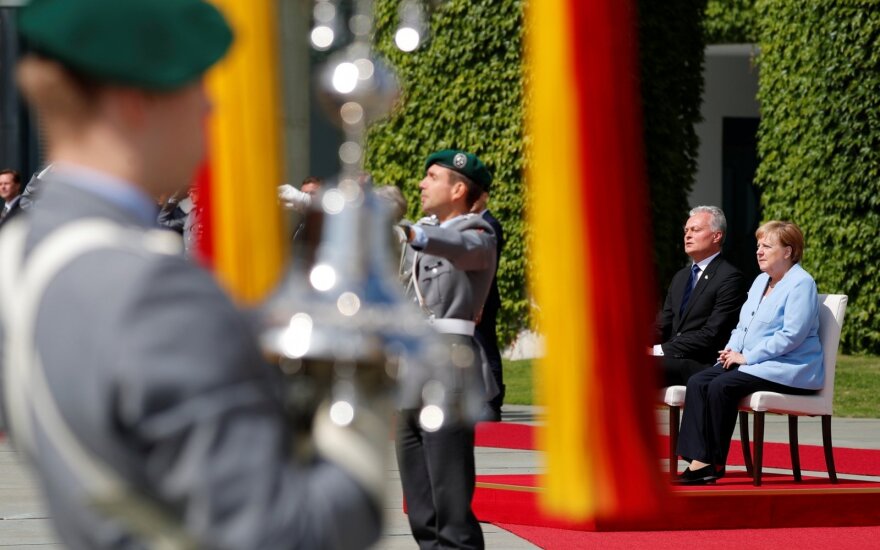 Speaking to reporters as he returned to Vilnius after a two-day visit to Berlin, Nauseda said that while Germany was careful not to increase tension with Russia, it was closely watching the situation in eastern Ukraine.

"Germany's attention to Russia's actions in Ukraine has certainly not decreased," the Lithuanian president told reporters at Vilnius Airport on Thursday afternoon. "The situation is being monitored; efforts are being made to look at it a sober and rational way and not to sharpen the tension."

"But that does not mean Germany no longer supports the sanction policy or backtracks on its earlier position to make the sanctions dependent on the Minsk agreements and the reduction of escalation," Nauseda said.

"If a breakthrough is achieved there, then we can talk about the lifting of the sanctions, but certainly not lift the sanctions unilaterally without Russia having done its part," he added.

The president said he had told the chancellor that Lithuania remained critical of the project which will carry Russian gas to Germany along the bottom of the Baltic Sea, bypassing Ukraine, the Baltic countries and Poland.

"When the chancellor mentioned Nord Stream 2, I said, 'Madam Chancellor, nothing has changed in Lithuania's position'. She smiled and said, 'I wasn't really hoping (it would)," the Lithuanian president said.

Nauseda met with Merkel and German President Frank-Walter Steinmeier during his two-day visit to Berlin.

The EU introduced the sanctions against Russia in 2014 after Moscow annexed Crimea and started supporting separatists in eastern Ukraine.