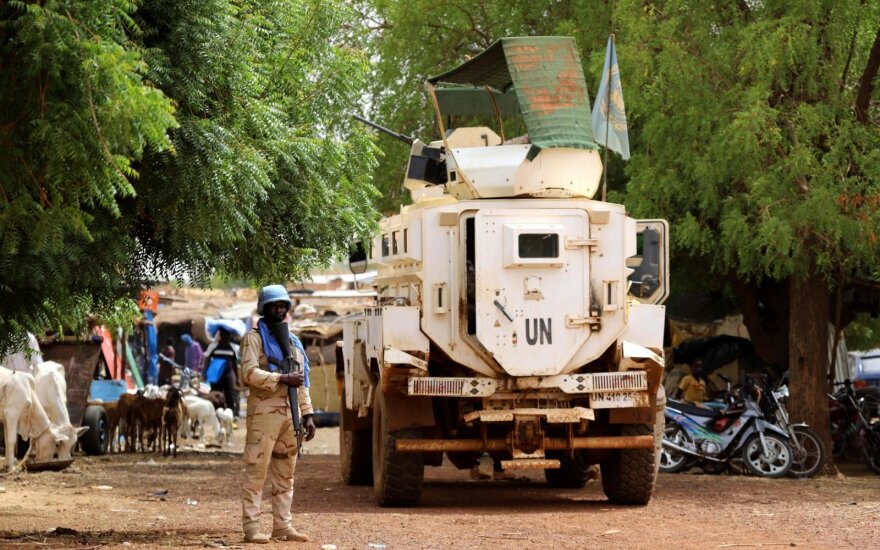 He sent a letter to Lithuanian President Gitanas Nauseda in late June, which had not been previously reported.

France has been trying to secure support from Lithuanian politicians for its request to contribute troops to the so-called Takuba task force, a European special forces mission helping Mali's forces to fight jihadists.

"I wanted to assure you that a contribution from your country would be particularly useful and valuable," Macron said in the letter seen by BNS. "I hope (...) that we can count on your support."

Paris has been asking Lithuania to ramp up its presence in the region for years. Discussions in Lithuania on the matter resumed last spring.

French diplomats in Vilnius have been in contact with the Defense Ministry on the matter for some time now. They say Lithuania's contribution to the African mission would not only be a gesture of solidarity with France, but also a new opportunity for Lithuanian troops to gain further battlefield experience following their withdrawal from Afghanistan.

Related articles
French companies show interest to find Lithuanian partners
Ambassador of France to Lithuania: there is much to be learned from both sides

Nauseda has not yet said whether he approves of the French request.

Lithuania should make its final decision on troop deployment this year.

In the letter, Macron tells Nauseda that Paris is reviewing the international military presence in North Africa.

In early June, the French leader announced that France's Barkhane operation in Mali would be replaced by a broader international mission.

"With our Sahelian, American and European partners, we are currently conducting consultations in order to define a new framework for collective military engagement, which will be based on two main principles: the support of our partners in the fight against terrorism, and enhanced operational cooperation with partner armies in the Sahel who so wish, in close collaboration with the European training mission EUTM Mali," Macron wrote in the letter.

The Takuba task force "will remain a key element of this future system, which we will further strengthen," he added.

According to the French president, the existing Takuba partners intend to increase their participation and new partners are considering joining the mission.

"Confident in this direction, new partners have confirmed their intention to join or are considering an increased participation," he said. "Finally, some have already started the political validation process necessary to be able to confirm their operational commitment."

This week, the Norwegian government announced its decision to send soldiers to Takuba, making it the ninth country to contribute to the task force.

Takuba currently consists of around 600 troops. Apart from France, soldiers have been deployed by Belgium, Estonia, Italy, the Netherlands, the Czech Republic, Portugal and Sweden. Denmark has pledged to do so in 2022.

Nauseda's spokespeople say that Lithuania will decide on troop deployment to Mali this year, noting that the country's contribution in Africa is already significant.

"Currently, most of Lithuania's troops involved in international missions and operations are deployed to the African continent," the president's Communication Group has told BNS in a comment.

"Lithuania's contribution to international security through participation in operations and missions, given the size of the Lithuanian state and its armed forces, is already significant."

"All new initiatives and possible alternatives are being carefully evaluated; the decision must be in the best interests of Lithuania's security," it said.

Currently, around 500 Lithuanian troops are taking part in two military missions in Mali and one mission in the Central African Republic.

The parliament's mandates for Lithuanian troops’ deployment to international missions have to be renewed every two years.

Nauseda will convene a meeting of the State Defense Council before asking the Seimas to renew the mandate for 2022–2023, according to his office.

The council is chaired by the president and also consists of the prime minister, the speaker of the Seimas, the defense minister and the chief of defense.

In late May, the Lithuanian parliamentary Committee on National Security and Defense discussed the country's possible contribution to the task force in Mali and recommended that the government consider such a possibility.

Deputy Defense Minister Margiris Abukevicius has said recently that the ministry has "a positive view" about Lithuanian troops' possible participation in Takuba.

Landsbergis: NATO should prevent Afghanistan from becoming another migration crisis

NATO member countries should seek to prevent the situation in Afghanistan to evolve into a new...

Afghans who worked for Lithuania have already joined a group of Lithuanian military personnel and...