BNS
aA
The Lithuanian Farmers and Greens Union, the Social Democratic Labor Party of Lithuania, the Order and Justice party and the Electoral Action of Poles in Lithuania – Christian Families Alliance and the country's Prime Minister Saulius Skvernelis signed a coalition agreement on Friday. 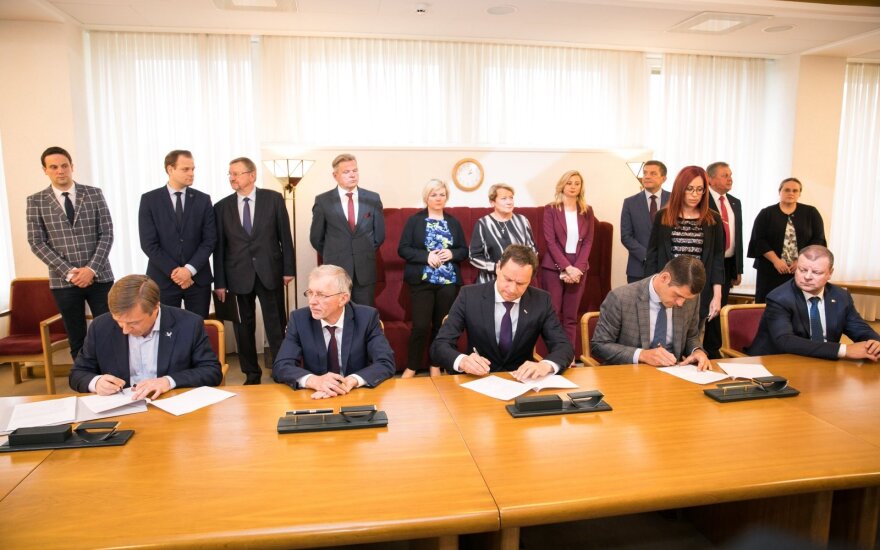 The agreement includes the program of the future ruling majority and post-distribution.

Under the signed agreement, the LFGU will delegate its representatives to the Ministries of Finance, Environment, Social Security and Labor, Energy, Economy and Innovation, Culture, Health, Education, Science and Sports, and Justice.

The SDLP will get the foreign affairs and agriculture portfolios, and the EAPL-CFA will take over the Ministries of the Interior and Transport.

A representative of the Order and Justice party will take over the Ministry of National Defense and plan to nominate an incumbent MP for the position, without disclosing the person's name.

The Order and Justice Party will be also partly responsible for the work of the Culture Ministry and will be able to delegate a vice minister.

The signed agreement also stipulates that the LFGU will nominate a candidate for prime minister, and the SDLP will nominate its representative for speaker of the Seimas.

SDLP leader Gediminas Kirkilas told journalists on Friday the LFGU council plans to hold a meeting on July 15 and decide the issue of no-confidence in Viktoras Pranckietis, the incumbent parliament speaker representing the LFGU. And only afterward, if it was decided to remove him, a vote would be held in the parliament.

Back on Tuesday, Kirkilas and LFGU leader Ramunas Karbauskis said a vote would be held on Tuesday, July 9, on no-confidence in Pranckietis, adding that he was not removed, the coalition agreement would not be valid.

LFGU leader Ramunas Karbauskis earlier pledged to walk away from power in case of unsuccessful elections earlier this year but started the formation of a new majority after Prime Minister Saulius Skvernelis lost the presidential election.

The new four-party coalition will have 76 votes in the Lithuanian parliament.

Until the presidential election, the LFGU had a coalition pact with the SDLP, and the two parties also signed a cooperation agreement with the Order and Justice party's political group in the Seimas.

Meanwhile, the EAPL-CFA often backed the decisions of the ruling majority.

After the European Commission recommended on Wednesday that Lithuania broaden its property tax...

Remigijus Zemaitaitis , leader of Lithuania's Order and Justice party, says he has already...