...
BNS
aA
The illegal migration crisis in Lithuania and other neighbors of Belarus is the "right moment" for the European Union to review its migration policy, European Commission Vice President Margaritis Schinas has said. 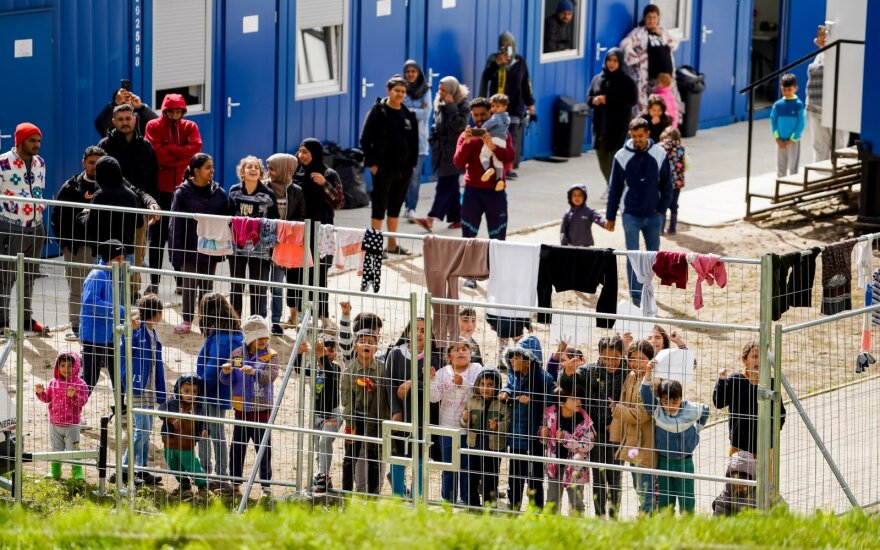 Speaking during his visit to Lithuania on Saturday, Schinas said that that migration outbreaks on the Greek-Turkish border last year, in Spain's northern African enclaves a few months ago and "now here, make me believe that those who want to weaponize migration for political purposes will be defeated".

"But the situation here is also another message for us in the European Union that this is now a high-time to move to a more predictable, comprehensive European framework for migration policy," the commissioner said in the border town of Medininkai.

The European Commission proposed changes to the common migration and asylum rules last year, but Schinas said negotiations had stalled because of the COVID-19 pandemic.

Related articles
Finance Minister: budget deficit may be smaller than planned this year
Firefighter fatally injured while installing fence at border with Belarus

He said EU leaders would hold talks on the rules this autumn.

The discussion on a review of the bloc's migration rules comes amid concerns about a possible new migration influx from Afghanistan after Taliban seized control of the country in late August.

Speaking on the migration crisis in Lithuania, Schinas reiterated the EU's position that Lithuania's border is a "European border" and that the bloc "stands in solidarity and unity with Lithuania".

"We, Europeans, firmly reject any attempt to instrumentalize people and human suffering for political purposes. We cannot and will not tolerate any attempt by a third country to exploit migration as an instrument or attack our union," he said.

The situation in Lithuania is not normal, because migration flows are "sponsored by authoritarian leaders to try to press an argument", according to the commission.

"I am familiar with these ideas of the government of Lithuania and we will be discussing them both in the Home Affairs Council, but also, I understand, that the European Council [will discuss them] next October, in Slovenia," he said.

Schinas noted that the EU „from the very first moment of the crisis this summer, deployed an impressive amount of resources and support" to Lithuania, adding that 150 officers from EU member states have been deployed to the country through Frontex to help tackle the crisis

"We have also responded to the Lithuanian request for an emergency assistance of 36.7 million euros to alleviate the consequences of what happened here," he said.

While EU rules do not allow direct funding for the construction of a fence on the Lithuanian-Belarusian border, funds will be allocated for border protection, such as surveillance systems, according to the commissioner.

Prime Minister Ingrida Simonyte, who accompanied Schinas on his visit to the border, noted that the crisis in Lithuania was not "traditional migration", but an "operation orchestrated" by the Belarusian regime for political purposes.

Therefore, Simonyte said, the EU "needs a different approach to the rules, to the requirements and to the institutions that take responsibility for the implementation of these requirements".

"Then crises should not be a normal state of affairs, but something very, very rare. And I hope that discussions that will start in the EU's new political season and will continue both at the institutional level and at the level of the European Council will certainly lead to an agreement where the house of migration policy is built not from the roof, but from the foundations," she said.

The prime minister said that Lithuania "has received a lot" of help from the EU, adding that she saw it as a response to the country's previous contribution to dealing with the 2015 migration crisis in Southern Europe.

Simonyte said Lithuania's proposed to change to the migration rules were aimed at finding a "very good balance" between the protection of human rights and "elementary abuses that also occur in this area".

Over 4,100 migrants have crossed into Lithuania from Belarus illegally so far this year, compared to just 81 in all of 2020. Vilnius accuses the Minsk regime of orchestrating the influx, calling it "hybrid aggression".

Lithuania has declared a state-level extreme situation and is building a physical barrier along its border with Belarus.

An officer of Lithuania’s Fire and Rescue Department was fatally injured at the border with Belarus...

Lithuania’s State Security Department (SSD) has warned about the heightened risk of violence during...